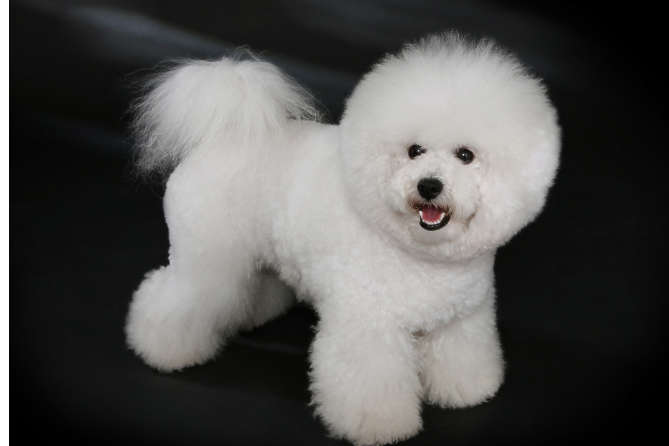 Bichon Frise is not a very common breed to be found in India. They are not that easily available and anyone looking for a Bichon Frise to raise as a pet should only purchase from a reputable breeder. These dogs prove to be a good fit for a country like India as they have a fine tolerance towards heat and can survive with ease in the Indian climate. They are also quite small in size and thus requires not a lot of space for themselves and can adjust well in small apartments and houses which are very common in the country. They are also a great option for a first-time dog owner as they are not very hard to handle and listens to their owners with keen interest. They are adored for their cute looks and small size and any potential dog owner would be happy to bring this bundle of joy into his/her life.

The Bichon Frise is a small but well-made breed of dogs which are mostly found in light colors like white and have a curious expression in their eyes. They are very popular around the world for their size and appearance. General breed standards for the Bichon Frise are given below:

They are as mentioned above, smaller in size and their weight and height are in proportion to their size. There is not a significant difference in the body dimensions of a male and a female Bichon. Their average weight is between 5-8 kg and height is somewhere between 9-12 inches.

They are double coated with the undercoat being dense and soft while the outer coat is curlier and coarser and texture. Touching their coat gives a plushy or velvety feel. Their coat is mainly white in color with some other light colors like apricot or cream present sparingly.

They have a compact and balanced body with an arched neck which is long enough to carry their head proudly. Their chest is wide and well developed with a well-pronounced forechest. They have a short back and a plumed tail. And, their forelegs and hind legs are small but well-proportioned with the rest of the body.

They have a slightly rounded head with circular eyes which are dark brown or black in color. Their ears are small and have long strands of hair flowing in the back of the region.

They have a well-made jaw region with a stronger lower jaw. Their muzzle is properly balanced and is proportional to the overall head.

These cute and adorable dogs are very cheerful and jolly in nature. They know how to spread positivity and light up a room with their presence. Bichons are very affectionate towards their family members and always wants to be around them. They also are quite sensitive as well and are not very tolerant towards being left alone. Their potential for playfulness is quite high and loves to do some kind of fun activity with their loved ones. Basic temperamental traits regarding Bichon Frise are listed below:

One of the sweetest and cutest looking dogs, the Bichon Frise is surely a tiny fluff ball of fun. They remain very lively and happy most of the time and loves to create a positive environment. Their fluffy coat gives them a cuddly appearance and any dog lover is unable to resist themselves from wrapping their hands around this woolly pooch.

But keeping their cute appearance to the side, they have also proven to be a fantastic house pet with their other wonderful qualities. They are extremely adjustable and adaptable as they can fit in any place as given to them, they also adapt well to the climatic conditions of any particular area as they have a decent resistance to both hot and cold weather conditions. Apart from this, they are also very friendly and warm towards almost everybody and are always on the hunt to make new friends.

But there are some aspects about the Bichon Frise to which the potential owners need to pay a little more attention and requires a bit extra effort from them. The distinct physical feature of the Bichon Frise is their beautiful and attractive coat but keeping that coat in the prime condition requires a heavy amount of grooming either by the owner or by a professional groomer. This requires an investment of both time and financial resources which might not be suitable for all the potential owners. Thus, proper knowledge and information about every aspect of a dog are important for anyone looking for a pet to raise before bringing him/her into your life.

They are categorized into different types based on the color of their coat. They are mostly found in light colors like:

Any dog should be fed according to their size, and the Bichon Frise being smaller in size requires a moderate amount of food and thus must be fed in limited amount avoiding any form overfeeding. They can be given a home prepared meal or a commercially produced/canned food, whichever is pleasing their taste buds and is good for their health.

Bichons are decently active and require an average amount of exercise to be in shape and maintain their health. A short stroll in the park on a regular basis, playing games either outside or inside the house, brief walks after meals especially after the dinner can easily fulfill their exercise needs.

They are mostly very easy to train as they are quite responsive and alert during any kind of training exercise. They are happy to learn new tricks and wants to please their owners by learning the new things quickly and performing them correctly. One thing that should be paid attention to, is that they are known to be difficult to housebreak and hence must be persistently and patiently trained for it starting from an early age.

Heavy grooming is required to keep the Bichon in a neat and clean state. Brushing of the coat at least twice or thrice a week is necessary but it is recommended to brush them on a daily basis. It is also advisable for the owners who don’t have enough time to fulfill their dog’s grooming needs to receive the assistance of a professional groomer. They also require monthly baths and regular trimming of their nails to look top-notch. Brushing of teeth can be done as deemed necessary by the owner.

Coming to their shedding level, Bichons shed their hair infrequently and in small amounts because most of the shed hair becomes tangled and get caught in the undercoat. Hence, proper brushing during the shedding period is recommended to remove the loose hair.

Bichons are relatively healthy dogs and stay that way for most of their lives. But they are prone to several diseases if not cared or looked after properly or their vaccinations and medications are not taken seriously. Common diseases found in the Bichon Frise are:

As they generally remain healthy and fit, they rarely require the aid of a veterinarian.

Bichon Frise or Bichon Tenerife as they were previously called are believed to be the descendants of a Mediterranean breed known as the Barbet. It was theorized that the Bichons were the product of cross-breeding between various small white coated breeds and the Barbets.

After the birth of Bichons, they were categorized into different types on the basis of slight differences in their appearance, their overall size and due to some other factors. These types were the Bolognese, the Havanese, the Maltese, and the Tenerife. It is believed that the Tenerife after gradual development became the breed that we now know, the Bichon Frise.

In the 1300s, the Italian sailors brought these dogs with them from the Canary Islands and they slowly became famous among the wealthy section of Italy and France. They were also very popular among the royal families and were even adored and appreciated by King Francis I.

However, during the time of World War I, their demand and popularity took a dive and it looked like they were on the verge of extinction, but because of the efforts of numerous French breeders after the World War, this breed saw a revival and an increase in their numbers. And finally, in the year 1971, they were recognized by the AKC and entered its miscellaneous class.