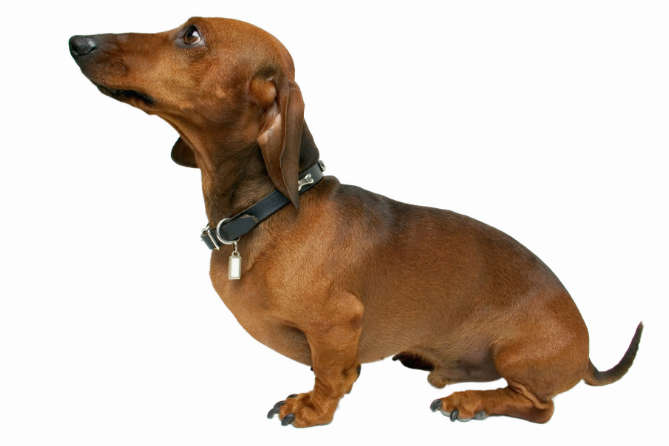 Is Dachshund Dog good for Indians?

Dachshunds are widely recognized and adored because of their unique shape and quirky appearance. Their popularity among the Indian Dog lovers is on a gradual rise. And there are many reasons which make Dachshunds a good option for any potential dog owner living in India such as:

Dachshunds are also available in various sizes and coats and thus there are a lot of options for any dog fanatic to choose from and bring this sausage dog home.

Dachshunds are highly distinct and unique looking dogs. They are popularly called as the Hot-Dog dogs or the Sausage dogs because of their long and slender body which is quite low to the ground and they have short legs. Dachshunds are officially divided into two sizes: standard and miniature. Official Breed Standards for the Dachshund are as follows:

They have an unusually long and fairly muscular body. Their neck is long, clean-cut and slightly arched and flows smoothly into the shoulders. The back region remains very straight. Both the forearms and the hind legs are strong, cleanly muscled but are fairly short in length.

Their head is neither too broad nor too narrow, slightly arched and tapers uniformly to the tip of the nose. They have almond shaped, medium sized eyes which are very dark in color. The ears are of moderate length, fairly rounded and are set near the top of the head.

Their jaws possess powerful teeth and strongly developed bones with the teeth fitting closely together in a scissors bite. Their muzzle is finely formed and little arched giving them a roman appearance.

Dachshunds are fairly playful and lively. They are happy to spend their time outside the house, in an open space. They love to chase small birds, animals, and balls thrown by their owners. They may be quirky looking and small but they are very clever and courageous too. They have a very sensitive nose which can trail smells to a fairly large extent. They can sometimes become challenging to train as they are a little stubborn but handled firmly and affectionately starting from an early age, they can become quite agreeable and responsive. General temperamental traits of a Dachshund are listed below:

Dachshunds are mostly known for their appearance which resembles a very popular fast food. But not only the shape of their body, the expression on their face is also considered to be comical and humorous. But they are a lot more than a distinct and funny looking dog.

They are highly courageous and are not afraid to protect you under any condition. They have an awesome watchdog ability and guarding instincts. As mentioned earlier, their sense of smell is exceptional. Their slim and slender body also allows them to get inside very small spaces like burrows et cetera.

Because of their protective nature, they are also not very friendly with any kind of strangers and thus, they should be carefully taught the difference between an actual stranger and someone that might be close but do not live with them. And, if the trainer is dedicated, then they can quickly learn that, as they are quite clever and fairly intelligent. Dachshunds do not get enough credit for their large number of positive qualities and are sadly mostly recognized for their outer appearance.

Coming to different colors their coats can possess, Dachshunds are available in a wide range of colors which are as follows:

A Dachshund must be fed very carefully keeping the calorie count limited and as necessary for its health. Overfeeding must be avoided in any dog breed, but especially in the Dachshunds. An overweight Dachshund can have several problems like a gradual strain on the long back which can lead to a ruptured disc. It is very important to feed this sausage dog as per the advice of a skilled veterinarian.

They have decent exercise needs as it helps them not only to remain fit and healthy but also to develop and build strong muscles that will provide much-needed support to their back region. Daily walks for about half an hour to one hour is recommended. Also, playing games with them outside or inside the house proves beneficial for their overall health.

They are not the easiest breed to train, hence it is recommended not to use any harsh methods as they are quite sensitive and do not react well to criticism. A trainer must be consistent and patient and equally passionate to train their dog. Positive reinforcement technique is very crucial and both the verbal appreciation and the reward-based appreciation methods are useful. Once, they are ready to get trained and are in the right mood, they can learn new things fairly quickly and are quite agreeable.

Dachshunds as mentioned earlier can possess three kinds of coat but all of them require little to mediocre amount of grooming. Smooth coated Dachshunds need very little brushing of hair and a gentle wipe with a towel to be tidy. Wirehaired Dachshund may require hand-plucking of loose hair several times a year. And, longhaired Dachshunds require more frequent brushing of hair than the short haired ones. But, once a week brushing is more than enough for them. Occasional baths and trimming of nails are necessary for all three of them. Coming to their shedding potential, Dachshunds are moderate shedders and only sheds occasionally in small amounts.

Dachshunds are normally quite healthy and fine, if fed properly and looked after carefully. But again, they are also prone to various diseases like all the other breeds. Common health problems found in Dachshunds are:

Because they remain fairly healthy, they require the assistance of a veterinarian very rarely.

Dachshunds are believed to be originated in the 16th century in Germany. They are considered to be the result of breeding between various breeds like the French Basset Hounds, the Spaniels, the Pinschers, and even the wirehaired Schnauzers. The involvement of so many distinct breeds might be the reason behind their various types of coat.

They were bred and raised to hunt down small animals like rabbits, foxes, and badgers. Their sensitive nose helped them in tracking their prey and their slender body helped them in getting into small spaces like burrows to catch the prey.

They even received their name because of the task they were used for. Dachs translates to ‘badger’ and Hund means ‘dog’ in German, hence, Dachshund literally means Badger Dog.

After their recognition as a distinct breed in the year 1910, their popularity slowly increased and with time they became one of the most famous dogs in the world and are still ranked #13 in the list of most popular dog breeds in the world.