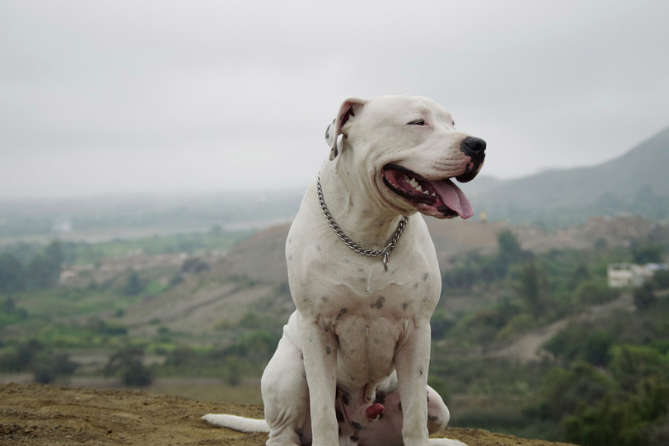 Is Dogo Argentino Good for Indians?

Dogo Argentino or the Argentine Mastiff is a large and powerful breed of dog which is immensely popular in the Argentine Republic. They are gradually becoming famous among the Indian households as well especially with the prosperous and wealthy section of the society. Finding them in India is still quite rare and if available, they should only be bought from a trusted breeder. Also, bringing them home and then raising them efficiently cost a fortune. The cost of the Argentine Mastiff can sometimes reach to 1.5 lakhs in the country. But, if we talk about whether they be a good fit for a country like India, then the answer is Yes, if the owner can provide them with enough space and room for themselves and is also financially resourceful, as they would have no problem surviving here because they are highly tolerant to heat and humidity.

The Argentine Mastiff is built like a tank with a powerful and muscular body. It is quite burly in appearance and yet it is within the desired proportions. Official standards for the Dogo Argentino are given as follows:

On average the Argentine Mastiff weigh somewhere around 35-45 kg with the males being slightly heavier than the females. And, their average height is between 23.5-27 inches (at the shoulders).

They have a uniform, plain and smooth-textured coat which is shorter in length. Their coat is found in different types depending upon the climate. In colder climates, the coat is dense and thick and in the tropical climates, it becomes sparse and thin. Also, their coat is found in one solid color with may or may not be a dark colored patch present around one eye.

They have a very strong and sturdy body with a well-muscled erect neck which is medium in length. Their chest area is quite deep and broad while the back region is fairly large and strong. They have a sabre-shaped tail which is very thick and long. The forequarters and hindquarters are very sturdy and heavy-boned and provide a good amount of stability to the whole body.

They have a mesocephalic type head (medium proportions) which very strong and well-built. Their eyes are shaped like an almond and are mostly dark of hazel colored. The ears are mostly cropped and erect and are set well apart and quite high on the head.

Their jaws are very strong, well adapted and are slightly convergent. The muzzle is a bit longer than deep but is quite well developed.

The Dogo Argentino is a breed that is not for the inexperienced dog owners as these dogs require a fair amount of handling and firm training. They are very affectionate with their loved ones and also are highly protective of them. They have a great watchdog ability and are extremely territorial (protective of their house, yard and whole property). They can learn a lot of things but are known to be a bit stubborn and independent while getting trained. Their temperamental characteristics are listed below:

The Argentine Mastiff is the only breed of dog that originates from Argentina. These dogs were bred for hunting and guarding purposes and because of their strong and powerful body, they were used to track and hunt large wild animals like boars.

Today, they are mostly recommended to experienced and knowledgeable dog owners because they need to be trained from a very early age so that they turn out to be obedient and disciplined. A novice owner may find him/herself to be a bit clueless and worn out while raising this majestic breed.

But, if trained properly, these dogs have the potential to be excellent watchdogs and can protect their family members against any kind of harm. And, under a skillful owner, they can also learn a lot of other things which makes them very functional and versatile. Currently, they are being used as police assistance dogs, search and rescue dogs, service dogs, military purpose dogs and also as a guide for the blind people in various parts of the world.

The Dogo Argentino has no specific types and is only available in a single solid color and that is pure White. It may or may not have a dark colored (usually black) patch present around one eye.

The Argentine Mastiffs are quite strong and muscular dogs with a substantial overall size, hence they need a high-quality feeding material in a good amount to remain healthy and fit. Food can be chosen as per the advice of the vet. It can be either home-cooked or commercially prepared.

They have a fairly decent exercise requirement and like to stay active and be involved in some kind of physical activity. They love to go on long walks with their owner multiple times a day. If that is not sometimes possible, then playing with them inside the house will also help them a lot. They can also be taken for occasional swimming, hiking et cetera.

As clear by the long list of tasks and jobs that they are being currently used for, these dogs can learn a lot of different things. But, the important thing to note is that they require a good teacher to make them learn various new things. They will learn faster and effectively if the person teaching them is also skilled and experienced. Under a novice owner/trainer, they can become stubborn and less obedient and thus the whole training process would become very hard and exhausting for the owner.

They possess a short dense coat that requires very low maintenance and grooming. Weekly Brushing of the coat, monthly bathing and occasional brushing of teeth and trimming of nails is more than enough for them to look neat and tidy. Also, their shedding potential is below average to sometimes mediocre and they shed in small amounts.

It is very important for any potential owner to only look for this breed at a trusted breeder’s place. There is sometimes a chance of some genetic problems to be found in these dogs if they are bought from an unreliable source. Some common health issues found in the Dogo Argentino are as follows:

The Argentine Mastiff is a fairly healthy breed and doesn’t need to be taken to a veterinarian’s clinic on a frequent basis.

There is no mystery behind the origin place of the Dogo Argentino but the story of how they came into existence is surely quite interesting.

Antonio Nores Martinez, a doctor and a surgeon, who resided in Argentina wanted a sturdy hunting dog who could also be his loyal companion. In the year 1928, Antonio chose the fighting dog of Cordoba (now extinct) to be his base breed and started breeding it with several other breeds. He chose this breed because of its durability and strength and then he cross-bred it so that its fighting instincts could be eliminated and the new breed would have a less ferocious attitude but still would be fairly sturdy and robust.

He bred the fighting dog of Cordoba with a large number of breeds such as the Bull Terrier, the Pointer, the Great Pyrenees, the Dogue de Bordeaux, the Boxer, the Bulldog, the Great Dane, the Spanish Mastiff, the Irish Wolfhound and the Bull Mastiff. And, the result of this excessively selective breeding was the Dogo Argentino.

After the Argentine Mastiffs came into existence, they were exclusively being used for hunting big games and tracking wild animals like boars. And after a while, they also started to be used as guard dogs. These dogs were considered to be the perfect companions for hunters because of their strength and durability which allowed them to navigate through the harsh terrain of Argentina efficiently.