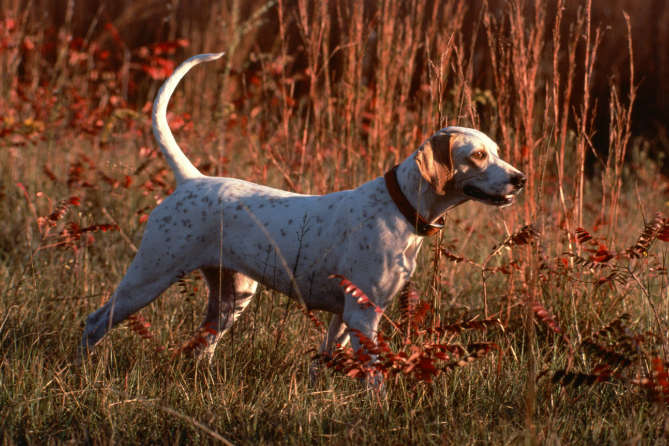 Is Pointer Good for Indians?

The pointer is an athletic breed of dog originating in the United Kingdom. Their availability and demand in Asian countries like India are slowly increasing because of their obedient nature and all-around easygoing personality. They can also efficiently thrive in places with high temperature and humidity, hence prove to be a good fit for a country like India. They are quite pocket-friendly as well and do not require any special care and extra attention from their owners. But, one thing to note is that these dogs are not very apartment-friendly and are not quite comfortable in small houses. They like to be in a spacious environment and are at their best when they have a got a decent amount of room or space for themselves.

The Pointers are quite agile and able-bodied canines who are reasonably muscular and powerful. They have an athletic and sporty appearance and also possess a great amount of endurance, stamina, and speed. Official standards for the English Pointers are as follows:

Pointer’s stature and mass are in great proportion with one another, thus it gives these dogs a lean and slender look. The average weight of an English Pointer is around 20-34 kg and its height is between 23-28 inches (at the shoulders). The male Pointers are slightly taller and heavier than their female counterparts.

Pointers have a dense and smooth-lying coat which is fairly short in length. They also possess a soft lustre on the outside of their coat which gives it a sheeny appearance. Their coat is available in quite a few colors which are always present either in a combination with white color or as pure solids.

They have a sturdy and well-built body with a long, muscular and slightly arched neck. Their chest is more deep than wide and the back region is fairly solid and strong. The tail is quite heavy at the base and is also finely tapered. Their forelegs and hind legs are well-muscled and powerful and provide a good amount of stability and agility to them.

Their head is moderately wide and the width is almost equal to the length of the muzzle. They have adequately sized eyes which are fairly rounded and are mostly present in a dark color. The ears are thin and a bit pointy at the tips and are set on at eye level.

They have well-made jaw region with their teeth closing in an even or a scissors bite. The muzzle is deep without any loosely hanging flews.

Pointers are known for their even temperament. They always remain calm and poised and are not easily annoyed or irritated. They are extremely affectionate and loyal to their family members and always stick to their sides. Pointers are also very careful with small kids and are quite protective of them as well. They are highly energetic and thus are in a playful mood most of the times. And, that also means their exercise requirement is very high. General temperamental traits of Pointers are listed below:

Pointers were bred in England to be used by hunters for catching games and small animals. These dogs were highly energetic, didn’t get easily tired and had enough speed and endurance that was required to last a full day of vigorous hunting and wild explorations.

Today, these dogs are known to be quite amiable and affectionate house pets who are very kind and devoted to their owners. And, in spite of their intense past involving hunting wild animals for days, these dogs turned out to be extremely friendly and loving in nature.

Pointers are highly active, spirited and intelligent dogs who are full of energy and thus they are always looking to spend this energy on some physical activity or task like playing games with their loved ones, running in an open area, fetching or retrieving stuff for their owners et cetera. They don’t like to sit idle and it is the responsibility of their owners to fulfill their exercise needs effectively.

They are also quite alert as well and have a tendency to remain a bit reserved with the strangers. They do not trust someone not known to them very easily and thus they prove to be good watchdogs by alerting the owners in case of any intruders.

English Pointers are mostly divided into two types based on some minor differences in their physical characteristics. These types are:

Also, the English Pointers are available in a few different colors which are mostly present in a combination with white color and are listed below:

Pointers are very energetic and active dogs and thus they require a good-quality feeding material and that too in a decent amount. The quantity of the food should be increased with the dog’s age. Also, treats should be given in limited numbers.

As stated, they are full of energy and are generally very active and agile in nature, hence they require a lot of exercise on a daily basis to remain fit and contented as well. The exercise can come in the form of long walks in a park, intense training, and playing sessions. It is to be noted that they should be kept on a leash while outside the house as they like to run at good speeds a lot. If the area is fenced, then the leash can be taken off of them.

Pointers have a responsive and alert personality especially while getting trained. They love to learn new things from their owners are quite agreeable during the training exercises. They are very loyal and decently obedient to their owners and thus this makes the whole training process a lot easier for the owner/trainer.

Pointers have a short and dense coat that requires minimal grooming. Brushing the coat once a week with a soft bristled brush, occasional bathing and trimming of nails are enough for them. They also require regular inspection of ears for any signs of infection or dirt. Also, pointers are occasional shedders and shed their coat in limited amounts infrequently.

Pointers are overall considered to be very healthy dogs who are genetically sound and fit. But, they get affected by some health-related issues which are as follows:

As mentioned, they generally remain quite healthy and thus do not require the assistance of a veterinarian that often.

The English Pointers as their name suggests hails from England, United Kingdom and are believed to be originated at around the middle of the 17th century. They were bred by the hunters for the specific goal of hunting wild animals and birds to meet their food requirements.

The English Pointers are believed by many cynologists to be a result of cross-breeding between various breeds like the Bloodhounds, the English Setters, the Greyhound, the Italian pointers and some more. These dogs were exceptional at catching different scents and therefore could help the hunters by taking them in the right direction.

They received their peculiar name because of their hunting style. Whenever they encountered a game or a bird, they immediately stood still without any motion and pointed towards the position of the animals to be hunted. And, because of this, they became highly popular among the British hunters.

When they moved outside of England, they began to be used again as hunting dogs in other countries as well. And, when they reached the United States, they were appreciated by most people for their abilities, speed and endurance. And, they were finally registered as a distinct breed in the year 1884 by AKC.