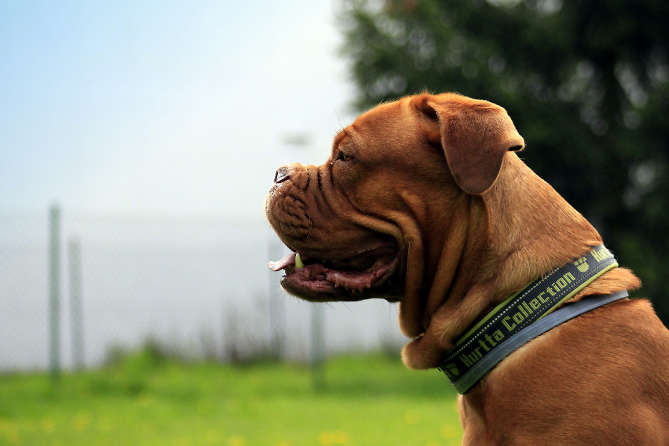 Is French Mastiff Good for Indians?

The French Mastiffs are large working-type dogs that are very famous in some European countries, but they are also gradually scaling the ladder of popularity in few Asian countries as well. In India, they are slowly being admired for their devoted and even-tempered personality and thus have a decent demand but mostly among the affluent section of the society as this breed is on the expensive side when it comes to properly maintain them. They also require extra attention during the hot summer m0nths as their tolerance to high temperature is subpar. Hence, anyone who is looking to raise this French canine must be ready to invest a bit of extra effort and financial resources if they want to raise it properly.

The Dogue de Bordeaux or the French Mastiff is a very powerful dog with a well-built muscular body. Its huge head with proper proportions is a distinct characteristic of the breed. Official standards of the French Mastiff are given as follows:

The French Mastiff is a fairly large sized dog and thus it is reasonably hefty and is decently tall. On average the French Mastiff weighs over 65 kg and has a height of around 23-27 inches (at the shoulder). The females may weigh less than 65 kg.

The Dogue de Bordeaux has a fine, soft-textured coat which is quite shorter in length. The skin underneath the coat is very thick and fairly loose-fitting. Its coat is mostly available in darker shades of red, fawn et cetera.

They overall have a very powerful and sturdy body with a strong and muscular neck which is almost cylindrical in shape. Their chest area is quite long, broad and deep and the back is equally muscular and wide. The tail is very thick at the base and is mostly carried quite low. The forelegs and hind legs have a very strong bone structure and are extremely powerful and robustly built.

They have a massive head which might be very large in size but is rather short, length-wise. Their eyes are set wide apart and are oval in shape. The color of the eye ranges from hazel to dark brown. Their Ears are relatively small in proportion to the skull and have slightly rounded tips. The color of the ears is a little darker than the rest of the coat.

They have a very powerful and wide jaw region with the lower jaw being curved slightly upwards. The muzzle is quite thick, broad, powerful and rather short.

The French Mastiffs may have an intimidating and imposing appearance, but they are very gentle and composed. They always remain quite calm and peaceful and are very affectionate with their family members. They also are very courageous and have a protective and watchful character towards their loved ones and their property. Hence, these dogs are considered to be excellent watchdogs. Their general personality traits are listed below:

The French Mastiff or as it is commonly known in France, the Dogue de Bordeaux is considered to be one of the most ancient French breeds. They have a uniquely sized head as in it is very wide and broad but rather short in length and hence they are characterized as Brachycephalic type dogs.

They are very powerful and possess a lot of strength but are equally calm and composed by nature. They remain very gentle with their loved ones and also are very tender with small kids. They have a natural guarding and watchful instincts and are very caring and protective of their family members. Also, the French Mastiffs are immensely loyal and devoted to their owners and will always be by their side. And, hence, they are considered to be very good companions and house pets.

But because of their attentive and vigilant nature, they do not trust any kind of strangers or other canines very easily and thus it is important for them to socialize with the people outside their homes. They should be taught and trained to be able to differentiate between a friend and a real stranger. They are also not considered a good option for the first-time or inexperienced dog owners as they require a substantial amount of handling, time and efforts from their owners.

The French Mastiffs are divided into different types based on the various areas they originated from. These types are:

Also, the French Mastiffs are available in a few different colors which are as follows:

A high-quality food which can either be prepared at home or purchased from a dog store must be fed in a required amount to this dog. The amount of feeding material should be gradually increased with the dog’s age. Also, it is very important to avoid overfeeding in these French Mastiffs as they are prone to obesity.

A very young (less than 18 months) French Mastiff must be limited to a light exercise schedule so as to avoid any kind of strain and pressure on the developing joints and bones. But the intensity and amount of exercises can be increased once the French Mastiff is fully grown. Slow-paced long walks, playing time either inside or outside the house or even swimming is considered to be a very good option for fulfilling their exercise needs.

The Dogue de Bordeaux requires an experienced trainer/owner who knows how to develop a sense of trust between him/herself and the dog. Once the dog starts trusting their owners, then training them becomes a lot easier. Also, it is very important to note that the French Mastiffs are quite sensitive by nature and thus harsh and rough training methods are not recommended.

Their grooming needs are not that high and brushing their coat once a week can help them in looking tidy. But, special attention is required towards the wrinkles on their face which needs to be cleaned weekly or sometimes daily as they have a tendency to drool a lot. Their ears must be checked on a weekly basis for any signs of infection. Bathing and trimming of nails should be done once a month. Also, they are considered to be regular shedders and shed their coat year-round.

The French Mastiffs are prone to several health-related issues. And, because of that, they have a relatively shorter life-span. Common problems found in the Dogue de Bordeaux are:

They require frequent visits to a skilled veterinarian’s clinic for regular check-ups.

The Dogue de Bordeaux hails from France and came into existence at around 14th century. These dogs were used as cattle drivers and as private bodyguards by the local people because of their powerful and strong body and their imposing personality, respectively. They were initially spotted in a region called Bordeaux in France, which inspired their naming.

There are a lot of speculations about the origin of these French Mastiffs. Some believe they are the descendants of the mastiffs brought by the Alans to Europe while others believe that their ancestors were may be the Bulldogs, the Roman Molossus, and the Tibetan Mastiffs.

Initially, they were available in two different forms – large and small and they were known as Dogues and Doguins, respectively. But, gradually the Doguins or the small sized French Mastiffs ceased to exist and only the large ones survived the test of time.

After the French Revolution, the number of French Mastiffs fell down substantially. It is due to the efforts of Raymond Triquet who formed a French Mastiff club, that this breed saw a revival. They were recognized by the AKC in 2008 and are now quite popular not only in France but all around the world.