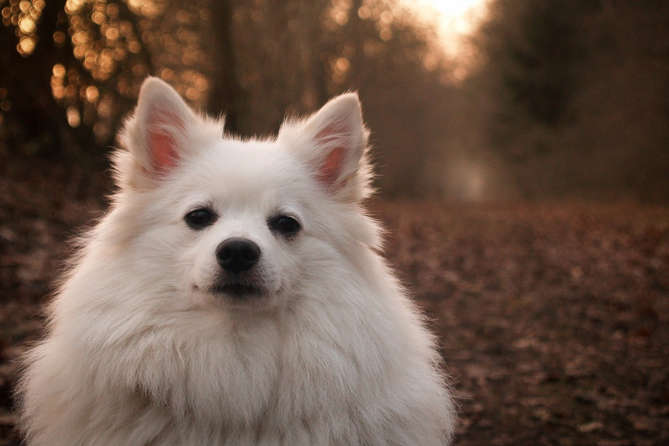 Is German Spitz Good for Indians?

The German Spitz is a very common breed to be found in the Indian households. And, there are various reasons for their decent demand and availability in the country,

All the above-mentioned reasons, make these dogs a very good option for any potential dog owner who is looking for a lively and cute doggy to raise.

These dogs are double coated with a woolly undercoat and a straight, hard-textured exterior coat which is fairly long and covers the whole of the body. The hair around the neck and forequarters is abundant while it is short and smooth on the face. The tail is also covered with heavy feathering.

Regardless of the different sizes that they are found in, these dogs are compactly built and are quite robust and sturdy. Their neck is moderately short and blends well into the shoulders. The chest is somewhat deep and the back region is well-muscled. Their tail is curled right up from the root and is set quite high. The forelegs and hind legs are well-boned, straight and strong.

They have a medium sized head which is in proportion to the body. The eyes are oval shaped, medium in size and are mostly present in a darker color tone. They have small triangular ears which are held erect most of the times.

They have well-developed jaw region and their mouth closes in a complete scissors bite. And, the muzzle is short and tapering.

The German Spitz is an all-around friendly and loving dog breed. These dogs enjoy spending their time with the people they love and care for and also likes to play numerous games with them. This breed is always eager to please its family members and thus training them is quite easy and a fun task to do. They like to socialize a fair amount but they remain aware and watchful of their surroundings most of the times. They also act as pretty decent watchdogs and can immediately alert their owners in case of any intruders. And, all these qualities make these canines a perfect family pet. Some general temperamental traits of the German Spitz are listed below:

The German Spitz dogs are widely appreciated and adored for their beautiful furry coat, erect ears and the cute expression on their faces. They are often mistaken for the Pomeranians and chances are very high that what you might think is a Pom Pom, may be a completely distinct breed.

The German Spitz is an amiable and cordial breed who is devoted and quite fond of its housemates. These dogs are generally gentle and fine with the small kids present in the house and are fond of having fun with them. They are fairly clever and intelligent as well which makes them understand their owner’s command quite easily.

They may be present in two sizes, but both of them are equally attractive, lively, spunky, pleasant and affordable and hence, whichever size you go for, you are in for a treat.

The most popular types of German Spitz are Mittel and Klein, but there are some other types as well based on the different sizes of the Spitz breed. Officially, the German Spitz breed can be divided into five types which are as follows:

Coming to their colors, the German Spitz dogs are available in the following colors given below:

The best way to choose a feeding material for your German Spitz is according to its size. If you're going for a Klein Spitz, then small portions of food are enough for it, but if you want a Mittel Spitz, then the amount of the feeding material must be increased. It is better to take the advice of a reputable vet for the feeding needs of a Spitz-type dog.

The German Spitz requires a moderate amount of exercise on a daily basis. Short walks, playing sessions with family members, making them learn new skills, all contribute towards their exercise requirements. But, it is important to note that, these dogs don’t like to sit idly for longer periods of time as they tend to become bored and frustrated and that could lead to a destructive behavior.

These dogs are quite intelligent and are always very responsive towards any kind of training exercise. They are fond of pleasing their owners/trainers by learning the new tricks which are being taught to them as quickly as possible. They are known to be quite vocal as well and hence they must be taught to control their urge to unnecessarily bark at something or someone new.

Their heavy double coat requires a reasonable amount of grooming. Brushing of the coat should be done at least 2-3 times a week and its frequency should be increased during the shedding season that comes twice a year. During that time, these dogs shed profusely and brushing them would help in removing the loose hair and also avoiding the mat formation. But apart from the shedding season, they shed in minimal amounts. And, occasional baths and trimming of nails are also required but they can be done as deemed necessary by the owner.

Normally a very healthy and fine breed, the German Spitz suffers from some common health-related problems which are as follows:

These dogs rarely require the assistance of a veterinarian because they tend to remain quite healthy and fit for most of their lifespan.

The German Spitz breed is considered to be the descendant of various herding breeds like the Lapphund and the Samoyed. It is believed that these dogs were used as farm workers and they also used to defend and protect the farmer’s fields and homes in Germany.

Around the 18th century, this attractive breed caught the attention of English royal families and it is well speculated that the wife of King George III was very fond of this breed and she had several white German Spitz dogs lying around at her place.

But, after the World War I, their numbers took a hit, but they gradually rose back to their earlier status and again became very popular especially in Europe around the year 1970. Today, they are in high demand in countries like Australia, Britain, and Germany. Their demand in India is also slowly increasing day by day.