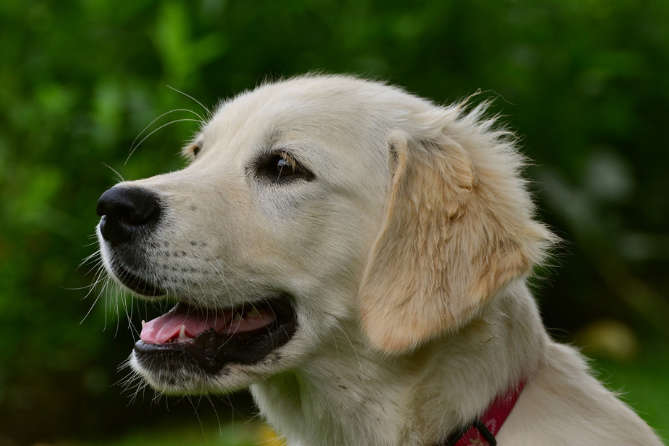 Golden Retrievers are extremely popular in the Indian households. Their demand always remains on the higher side and they are readily available too. They have a moderate tolerance to both heat and cold and thus are not severely affected by Indian climatic conditions like some other breeds. Also, bringing a Golden Retriever home is not so expensive but maintaining it properly can be a bit pricey, hence any potential owner should contemplate properly.

They have a dense outer coat which is fairly water repellent and a decent undercoat. Their coat is neither silky nor coarse and lies close to the body and is very resilient and firm. The coat is heavier in the back of the thighs and neck region and is on the lighter side in the head, paws, and front of legs. Guessing the color of their coat is not very hard, and they are mostly found in different shades of golden.

They have a short coupled and well-balanced body. Their chest region is deep and well developed. They have a moderately long neck which gradually merges into the sturdy shoulders. Forequarters and hindquarters are well coordinated and muscular.

They have a slightly broad and arched head with a wide and deep foreface. They have medium to somewhat large sized eyes which are mostly dark brown in color and have a friendly and kind expression in them. They also have short ears which fall close to their cheeks.

They have strong jaws and a straight muzzle which is medium in length and blends smoothly into their skull.

Golden Retrievers are known for their all-around friendliness and are highly affectionate with everybody. They have a trusting nature and wants to make as many friends as they can. They also are quite intelligent and can learn several new things fairly quickly. They have a confident personality and are one of the most reliable dog breeds out there. General temperamental characteristics of Golden Retrievers are:

Golden Retrievers are amongst the most popular dog breeds ever all around the world. They are loved and appreciated almost everywhere for their warm and friendly personality. They have a very welcoming nature and wants to be around someone at every point in time. They are not very good at being alone and are quite sensitive about it.

Golden Retrievers have the power to lift up the spirits of anyone with their affection and kind attitude. Also, they are highly trustworthy and dependable and a Golden Retriever owner can be altogether certain that his/her pooch will always stick by their side.

Training these dogs is also a very fun and enjoyable task in itself as Golden Retrievers are fond of learning new skills and tricks, they are always very excited to be trained and are eager to please their trainers. Training them regularly can help them in learning different things and also helps in their mental development.

Potential Golden Retriever owners should know that they are bringing a bundle of joy into their homes who will fill their lives with ample happiness and positivity and they also must try to provide the same positive experience to these pooches as well.

Golden Retrievers can be divided into three types based on minute cosmetic differences between one another. These types are:

Coming to the question of different colors that their coat can have, the answer lies within their name as they mostly have various shades of golden color on their coats.

These different shades are:

Golden Retrievers do well on a high-quality food which can be prepared at home or purchased from a store. They should be fed carefully, keeping their calorie count in check as they are prone to obesity. The quantity of food to be fed should increase gradually as with the doggy’s age.

Similar to several other sporting breeds, the Golden Retriever also requires a lot of exercises and physical activities to remain in shape and healthy. Daily long walks, outside playtime, teaching them new skills that involve fetching, running et cetera is advisable to keep the Golden Retriever fit. They are always very excited and happy to indulge in any kind of physical activity and thus fulfilling their exercise needs is quite joyful for the owners as well.

Golden Retrievers are always ready and, in the mood, to get trained and learn new skills. They are unfailingly eager to please their trainers and have an overall positive attitude towards various training exercises. Their training should begin at an early age and obedience training is also recommended.

They have moderate grooming requirements. Brushing of hair once a week, bathing twice a month and trimming of nails and brushing of teeth as required is more than enough to fulfill their grooming needs. They are also fairly low to moderate shedders and only shed once or twice per year quite heavily.

Golden Retrievers are generally healthy and fine dogs but still, regular check-ups and consultation with a skilled veterinarian are recommended to safeguard their proper growth and development.

Around the year 1860, a hunter named Sir Dudley Marjoribanks or more famously known as Baron Tweedmouth in Scotland wanted a dog who could retrieve the hunted game and carry it in their mouth without leaving any bite marks on it.

Lord Tweedmouth also wanted a dog who could survive in the Scottish weather. Hence, he started breeding yellow retrievers with the water spaniels. The result of this breeding led to the birth of Golden Retrievers that we now know.

In 1911, this breed was officially registered by the Kennel Club. Their popularity started increasing and they were becoming famous because of their ability to be an awesome hunting partner. Now, in the year 2018, they are not used much for hunting purposes but they are still extremely popular and a great general companion for anybody.