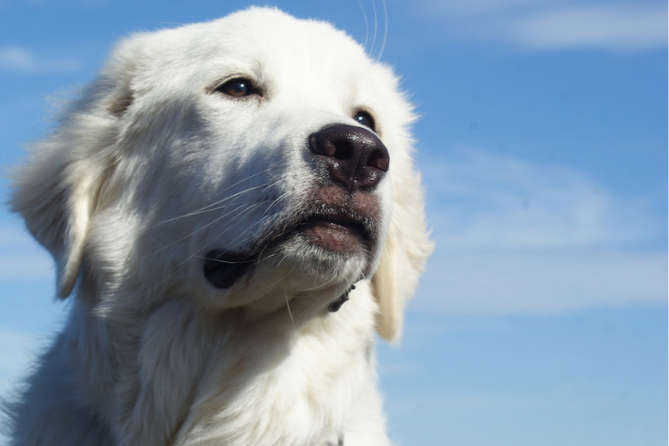 Is Great Pyrenees Good for Indians?

Many people in our country are unaware of this majestic breed and it is may be due to the fact that these dogs are quite rare to be found in the Indian households. The Great Pyrenees that hails from Europe is a large sized dog which can be a good fit for a country like India because it possesses an awesome weather-resistant coat that not only enables it to survive in cold weather conditions but also makes it fairly tolerable to hot and humid climatic conditions, which are normally seen in India. But, it is also true that this dog is not meant for everyone as it is not easy to handle and requires a knowledgeable and experienced owner who understands the psyche of canines. Hence, this breed may be fit to thrive in this country but it will not be easy for a novice owner to raise it.

The Great Pyrenees possesses a kind, elegant and noble look and is loved and adored by many people for its sheer beauty and regal expressions. The official standards of the Great Pyrenees are as follows:

The mass and stature of this breed are in good proportion to one another. The average weight of the Pyrenean Mountain Dog is 38 kg and more for the females and 45 kg and more for the males. And, their height lies somewhere in between 25-32 inches (at the shoulders).

This beautiful breed is double coated with a dense and woolly undercoat and a thick, long and coarse exterior coat. Their coat is quite special because it makes them durable and let them efficiently thrive in various climatic conditions. The coat is quite profuse around the shoulders and the neck region and also forms a plume on the tail. And, apart from the face and ears, the hair is on the longer side on the rest of the body.

They have a sturdy and powerful body with a muscly neck which is of moderate length. The chest area is reasonably broad and the rib cage is well-sprung. The tail is set just below the back region which is quite broad and strong. Their forequarters are muscular, well laid back and lie close to the body. And, the hindquarters are equally strong and well-built.

They have a wedge-shaped head which is in proportion to the rest of the body. Their eyes are medium in size and are shaped like an almond. Most common eye color to be found in them is dark brown. The ears are V-shaped and have rounded tips and are set on at eye level.

They possess a fine jaw region with the lower jaw being relatively stronger than the upper jaw. Their teeth close in scissors or level bite. And, the muzzle is quite sturdy as well and blends smoothly into the skull.

The Great Pyrenees is generally a very patient and composed canine who is very affectionate with the people it cares for. This breed is known for its fearless and confident attitude and these qualities make them a very good option for a guard dog as they do not shy away to confront a stranger or an intruder. They are very gentle with their family members including the small kids present in the house. These dogs are quite loyal to their loved ones but still, it doesn’t make them very easy to train as they are somewhat independent thinkers and a bit stubborn at times. The various character traits of a Great Pyrenees dog are given below:

The Pyrenean Mountain Dog is the perfect embodiment of the saying “Beauty Brains and Brawn”. This breed possesses an awe-inspiring look, is fairly intelligent and smart, and is filled with great power and strength.

The Great Pyrenees was bred specifically for guarding purposes and it was highly efficient in its job and to this day, the protective instincts are still found in them and is one of the main characteristics of this breed. They are highly territorial by nature and are always very aware and ready to protect their property and housemates from any kind of outside harm.

But, this quality also makes them a bit reserved and less warm to strangers of any kind. They are not very social and are cautious when meeting new people. Early socialization and training are very important for these dogs so that they can efficiently distinguish between a true stranger and someone who is friendly but not very well known to them.

They turn out to be very well-mannered if properly trained, but they do require a fair amount of guidance and handling from an early age to become more obedient and less stubborn when they grow up. And, this can be efficiently achieved by only an experienced dog owner and thus these doggies are not recommended to first-time dog parents.

There are no official types and sub-categories of a Great Pyrenees dog, but casually they can be divided into two types which are:

Also, this dog is mostly present in White color but do possess some markings which can be of various colors like:

This breed is benefitted by multiple small meals at regular intervals rather than being fed large quantities all at once. They mostly prefer high-quality dry food which is low-protein and is specifically made for large breeds. But, this is not true for every Pyrenees dog and some might prefer a home-cooked meal, so it is better to select their feeding material through a trial and error method.

They are not very active and agile canines but they do require a decent amount of exercise to be in a right shape. They were bred as a working breed and hence they are happy to be involved in any kind of task or activity. Daily walks and playing sessions help them both physically and mentally.

This breed used to work alone and without any kind of guidance in the past when it was developed, hence, they do not readily welcome any kind of training or teachings from their owners. It is important to find creative and interesting ways to train these dogs and also to catch them in the right mood so that they are happily involved in the training exercises. Therefore, these dogs are raised mostly by experienced and well-accomplished dog owners.

Apart from being a weather resistant coat, their fur is also tangle and dirt resistant. And, hence, they require minimal grooming to look tidy and beautiful. Weekly brushing of the coat and occasional baths are more than enough for them. Trimming of nails and brushing of teeth can be done as deemed necessary by the owner. But, one thing to note about their coat is that it sheds profusely especially during the shedding season and during that time, they need to be brushed on a daily basis.

The Great Pyrenees is prone to various health-related problems and it should be properly tested and cared for against them. The most common problems are:

Visits to a skilled veterinarian’s clinic at least once a month is recommended for the Great Pyrenees for general health check-ups and consultation.

The Great Pyrenees dogs are believed to be the descendants of the Maremmano-Abruzzese and the Hungarian Kuvasz. This breed originated in the Pyrenees Mountainous region which acts as a border between Spain and France. And, this also became the inspiration behind their naming.

When they came into existence, they were primarily used for guarding sheep, but gradually as time passed by, this breed caught the eye of the French nobles who wanted them as guard dogs. These dogs were now used to fend off the large sized animals like bears and to protect the endangered flocks from them.

Later, they excelled at various other jobs too like pulling the cart, rescuing people from avalanches, acting as a sled dog, helping their masters in battles and also being a great companion and a protector of its family and territory. And, even now these characteristics haven’t changed a bit and still can be seen in these majestic dogs.