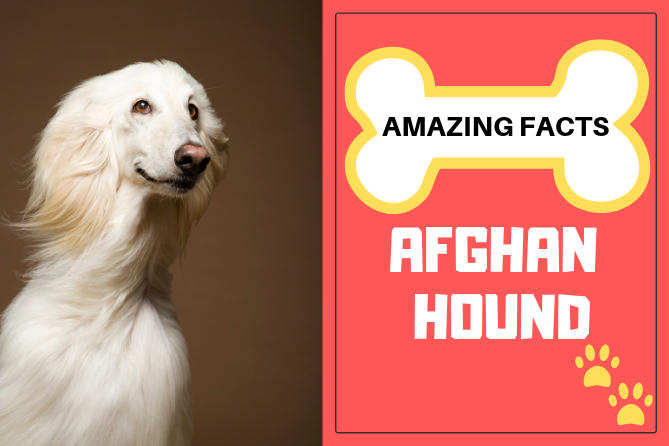 Here are some fun and fascinating facts about the Afghan Hounds that will surely surprise a lot of people!

Over the years, these elegant canines have had a lot of different names. Apart from their official name, the Afghan Hounds’, these canines are also known as Baluchi Hounds, Tazis, Tazi Spay, Sage Balochis, and Eastern Greyhounds or Persian Greyhounds.

When Afghan Hounds came into existence, they were primarily used by the hunters of Afghanistan. These canines would accompany the hunters on their quests and would help them by chasing the faster animals such as leopards and then they would hold them off until the owners of these canines were ready to hunt down the preys.

The long and flowy coat of the Afghan Hounds is surely the most distinctive feature about this breed. But, apart from making these dogs look more elegant and stylish, their coat also protects them under various kinds of harsh climatic conditions (cold and hot). And, because of their weather-resistant coat, these canines are known to survive in almost any place on this planet.

Due to their great vision, the Afghan Hounds are officially categorized under a group of canines that only use their speed and sight for hunting purposes. Such pooches are known as the Sighthounds and this group includes various breeds of canines from all around the world such as Saluki, Irish Wolfhound, Borzoi, Greyhound et cetera.

The placement of hips in the Afghan Hounds is quite different when compared to some other breeds. Each hip is placed a bit higher and fairly wide apart from one another in these canines and that allows them to make quick turns without the need to stop first.

There are many theories and speculations about the ancientness of the Afghan Hound. Some say they date back to the pre-Christian era while others believe that the Afghan Hound was one of the animals that were rescued in Noah’s ark. There is one more theory that states this breed came into Afghanistan with the army of Alexander the Great, but once again no one can fully prove this theory to be true. The ancestors of this breed are believed to be the Salukis because of the close resemblance that these two breeds share with each other.

In the year 1926, one year after they moved from Afghanistan, the American Kennel Club recognized the Afghan Hounds as a distinct breed. And, in 1940, the Afghan Hound Club of America was formed.

The Afghan Hounds are not known for expressing their feelings to their owners and loved ones. They do love and care for their owners and family members but unlike other canine breeds, they don’t regularly show these feelings to their housemates. And, because of that, many people label Afghan Hounds as aloof and independent, which is not entirely true.

The Afghan Hounds require a proper guidance from their owners who can effectively train them and make them a better version of themselves. And, because of that many novice or inexperienced dog owners find these stylish canines a bit hard to train and thus they are only recommended to those people who are familiar with the difficult process that is known as ‘dog parenting.’

Because of the presence of scent glands in their cheeks, the Afghan Hounds are known to emit a distinct and pleasant odor. And, that is why they are sometimes referred to as “Scented Hounds”.

The famous Spanish painter, Pablo Picasso was also a huge admirer of dogs. He had many pet canines including an Afghan Hound which he named Kabul. Kabul is believed to have inspired Picasso a lot and he even appeared in many of Picasso’s famous paintings.

We all know how fast a Greyhound can run, but the Afghan Hounds are also not very far behind the Greyhounds in terms of raw speed. While running, an Afghan Hound can reach up to 65 kmph which is immensely impressive and is very close to that of an average Greyhound’s maximum running speed which is about 72 kmph.