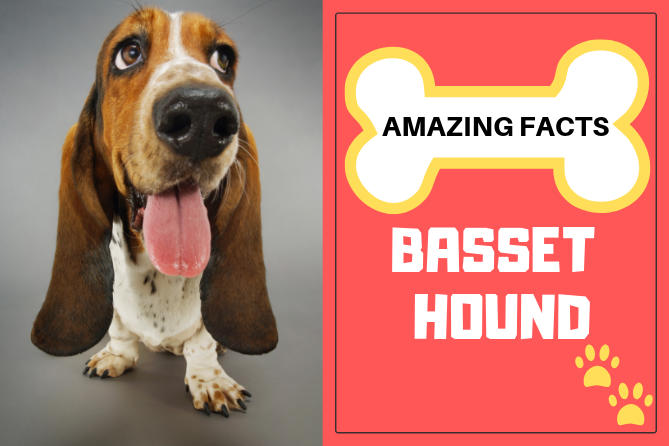 Here are some fun and fascinating facts about the Basset Hounds that will surely surprise a lot of people!

The first part of their name is inspired by their looks and body structure and they get the last part of their name from the pooches they were created from. The term Basset comes from a French word “bas” which translates to “low” or “short” and it perfectly describes their low-set body and short legs and they get the term “hound” from the canines that they were bred from, the Bloodhounds.

Hush Puppies is a very popular American Shoe Brand that was introduced in 1958. This interesting name of a shoe brand is inspired from a food item of the same name and there is a very fascinating story about how this food item received this unique name in the first place. It is believed that to stop their Basset Hounds from barking and to make them quiet, the hunters and farmers would feed them the stuffed fried cornballs. And, as soon as these Basset Hounds would eat these cornballs, they would immediately become quieter and “hushed.” And, that’s why this food item was given the name hush puppies. And, later, the shoe brand got inspired by this story and they changed their name to Hush Puppies and they also made the Basset Hound their brand’s mascot and it is also used in their logo. And thus, these Basset Hounds are also sometimes referred to as Hush Puppies.

Because of short legs, a Basset Hound’s body is closer to the ground when compared to some other canines. And, this helps them a lot while they are tracking a scent as their low-set body is also closer to the scent and thus can track it more easily. Also, in the past, their unique body structure helped them to squeeze in under low and shallow places and hunt down animals like rabbits and hares.

With 220 million scent receptors in their nose and an ability to distinguish between a wide range of scents, the Basset Hounds are truly one of the best-sniffing dogs to be alive today. In fact, only the Bloodhounds are considered to be above the Basset Hounds when it comes to the sniffing abilities.

The long and broad ears of the Basset Hounds help these canines by collecting the various scents and then bringing them directly to their nose. And, because of this, they can track a particular smell more quickly.

It is widely believed that the French monks developed a canine at the abbey of St. Hubert in Belgium that possessed a very strong nose. They called it the St. Hubert Hound. When some time passed by, this small breed was subdivided into other breeds, one of which became the Bloodhound that we know today. And, the canines that had short legs and low-set body later became the Basset Hounds.

After coming to America in the late 1800s, these canines were finally recognized by the American Kennel Club in the year 1935 as a distinct breed.

The French wanted a pooch that can accompany them on their hunting expeditions and help them hunt down small animals like rabbits, hares et cetera. So, with the help of the Bloodhounds (or St. Hubert Hounds), they bred these short but sturdy canines which are now called as Basset Hounds. These pooches helped the French nobility a lot during their hunting operations and their main task was to locate the position of their preys and then guide the hunters in the right direction. Sometimes, these canines were also used to scare the wild animals out of their hiding place so that the hunters could easily eliminate their targets.

Basset Hounds are known for their gentle and calm personality. These canines are very kind, sweet and friendly with almost everybody including their own family members, strangers or new people that they encounter, animals like cats and other canines and even the small kids. These pooches are perfect for someone who wants a devoted, affable and sweet-natured canine as his/her pet.

Unlike many other canines, the Basset Hounds are not very good swimmers. Their short legs and thick bodies don’t allow them to swim very comfortably in deep waters and thus they have a pretty hard time while they are trying to swim.

In 2011, a Basset hound named Victoria was chosen as the co-mayor of Concord, a small neighborhood which is located in the north of Toronto in Canada. Her partner was a Great Dane named Nelson.

A very popular cartoon character created by Tex Avery in 1943, Droopy is also a Basset Hound. He has made several appearances in various popular cartoons over the years, the most notable of the bunch is Tom and Jerry.