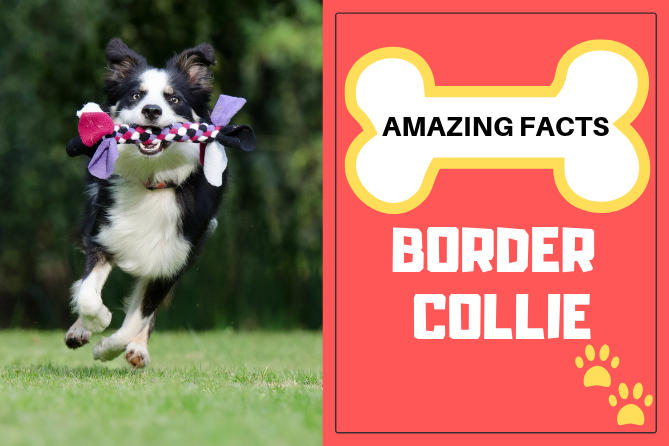 Here are some fun and fascinating facts about the Border Collies that will surely surprise a lot of people!

The Border Collies were bred and developed in a region that was on the “border” of England and Scotland. So, that might have inspired the first half of their name. The term “Collie” was added to their name because of the primary task these dogs were bred for, as Collie is a Scottish word that is used for describing “sheepdogs.”

Border Collies are widely believed to be the most intelligent canine breed that is alive today. These dogs are exceptionally smart and their problem-solving capabilities are truly unmatched. They can learn and understand various difficult commands and instructions given by their owners and then they are known to efficiently act on them and thus are considered to be the Intelligent Workaholics of the dog community by all the canine experts.

On the basis of their coats, Border Collies are divided into two types which are Rough and Smooth. The Rough Border Collies have a slightly longer coat than the Smooth ones whose coat is fairly short over their entire body and it also has a coarse texture on it.

A stud dog named Old Hemp is considered to be the true ancestor or progenitor of the Border Collie breed. The Border Collies were specifically bred for working and herding purposes and their main task was to control the large groups of sheep.

In the 1850s, Border Collies started to get imported to other parts of the world as more and more people began to realize and appreciate the wonderful qualities and abilities that this breed possessed. Around the same time, when Queen Victoria, who was already an ardent admirer of dogs, learned about the herding abilities and brain power of the Border Collies, she was also thoroughly impressed by them. And, hence, she became an active Border Collie enthusiast and she started breeding these canines. She loved all the canine breeds that were present at the time, but her favorite was a Smooth coated Border Collie who she named Sharp.

Although the very first standard for the Border Collies was written in 1906, they didn’t get registered by the American Kennel Club until 1995. These dogs were imported to America in the twentieth century only and once they become fairly popular in the United States and other parts of the world, they were eventually registered by various major Kennel Clubs including the AKC.

These dogs were bred on a farm and were used for work purposes. And, this urge to work and keep moving is still present in these dogs and that is why it is very important for the Border Collies to remain fully exercised and contented so that both their physical and mental health is kept in check. Daily exercise and work are highly crucial for the Border Collies as they can easily become very sad and frustrated if they are not receiving an adequate amount of physical work.

Some of the most famous and unusual world records that were held by the Border Collies are as follows:

Chaser, the Border Collie is believed by many to be the Smartest canine in the whole world. According to various tests, Chaser knows the different noun names of more than 1000 objects.

Over the years, the Border Collies have appeared in many Hollywood movies and Television shows like Babe (1995), Snow Dogs (2002), Mad About You (1992-1999), and Animal Farm (1999). Apart from this, these dogs have also been owned by some pretty popular celebrities like James Franco, Anna Paquin, Tiger Woods, Ethan Hawke, James Dean et cetera.