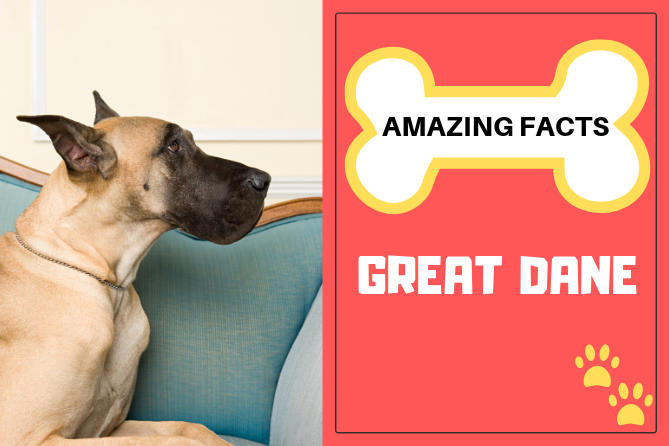 Here are some fun and fascinating facts about Great Danes that will surely surprise a lot of people!

Although the Great Dane is a German breed, there is a little confusion among some people about the origins of this breed and it is mainly because of its name. The name “Great Dane” has been derived from the term ‘Grand Danois’ which translates to ‘Big Danish’ and it suggests that this breed had some sort of connection with Denmark, which is not true as these dogs are known to be originated in Germany. And, that’s why some people still seem to be a bit confused over the true origins of this Giant breed.

Among all the Giant canine breeds, the Great Danes mostly come out at the top when we talk about their popularity. This amazing breed is highly adored and admired all over the planet and these dogs are considered to be pretty awesome family companions. They are even placed at the #14 spot in the AKC’s list of most popular dog breeds that features 190 distinct canine breeds from all around the world.

In 1967, the Great Dane became the official state dog of Pennsylvania. The founder of this U.S. state, William Penn, was an ardent admirer of the Danes and a painting depicting Penn and his Great Dane is still hanging in the Governor’s office. In 1876, even Germany named the Danes as their National Dog but they are known by a different name there which is Deutsche Dogge, or the German Mastiff.

While we may think no one can beat the Danes when it comes to height or stature, but statistically (according to the animal planet), the Irish Wolfhounds tend to be slightly taller than the Danes.

At birth, the average weight of a Great Dane puppy is around 0.5-0.9 Kilograms. But, only after six months of development, these pooches can weigh up to 45-50 Kilograms.

The German forests were filled with various wild animals, games, and boars around the 15th century. The German hunters at that time required a well-built dog that could accompany them and help them in hunting large boars. A careful breeding between the English Mastiff and possibly the Irish Wolfhound resulted in the formation of the first ancestors of the Great Danes. These ancestors were very large and heavy and were known to be fairly aggressive. They helped the hunters in hunting various wild animals including the boars. And, thus they were also known as the German Boarhounds at that time.

A female Great Dane named Juliana received two Blue Cross Medals for her bravery over the period of three years. She received her first medal in 1941 when a bomb fell on her house during WWII and she saved her family members’ lives by defusing the bomb and she did so by urinating all over the bomb. And, in 1944, she received her second medal, when her owner’s shop was caught on fire and she was able to alert the authorities about it and thus saved his owner’s life again.

In the 1930s, a Great Dane going by the name ‘Just Nuisance’ became good friends with some Naval soldiers and to spend more time with his new friends, this Giant pooch started taking the train with the Navy soldiers. But, because the railway department was not so happy about a free riding canine on their train, they threatened to put down the canine. But, because the Navy soldiers absolutely adored their new four-legged friend and also the Sailors were allowed to take the train for free, they decided to enlist this pooch in the Navy. And, from then on, Just Nuisance and his naval friends were able to travel in the train without any fear. And, this is how a Great Dane became the only canine ever to be officially enlisted in the Navy, which is true to this day as well.

These Giant pooches were bred for the sole purpose of hunting large animals and games. And, because of that, qualities like ferociousness and viciousness were a huge part of these canines. But, as the popularity of hunting dwindled down, the brutal and violent traits from these large-sized canines gradually fizzled out. These canines even started breeding with the English Greyhounds and that also helped a lot in replacing the aggressive traits that they had with attributes like gentleness and tenderness. And, slowly, the Great Danes became the kind, mellow and even-tempered canines that we know and love today.

This canine is known to become an awesome family dog. Danes are affectionate and devoted to their owners, are good with small children, are even great with other animals like cats and other canines and are also happy to meet new people. They have a playful character and they love spending their time with their family members and loved ones. They even like to sit in their owners’ lap to show the love and affection that these canines have for their close ones.

The current Guinness World Record holder for the ‘tallest dog in the world’ is a Great Dane named Freddy who is 7 feet 6 inches tall when standing on his back legs. This record was previously held by a Great Dane only. His name was Zeus and he was 7 feet 4 inches tall when he stood on his hind legs.

The average lifespan of Great Danes is around 7-10 years. Because of their unusually large structure, these canines are prone to several diseases during their lifetime. The most common and most deadly disease for the Danes is believed to be Gastric torsion or Bloat in which the stomach of the canine distends and twists and it can prove to be fatal for the pooch.

Many people might not know about this, but, Scooby Doo, the famous mystery-solving canine is a Great Dane.