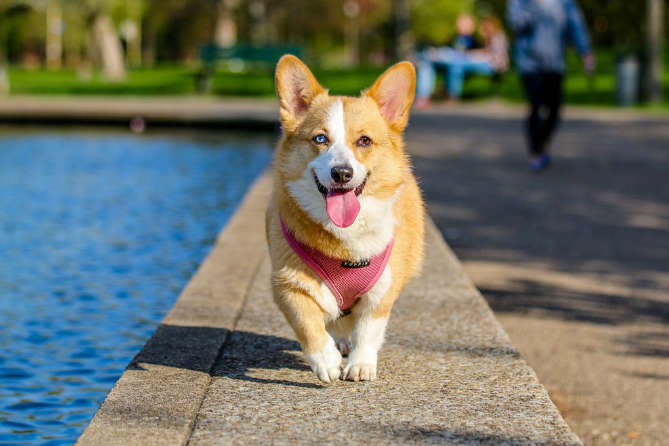 Pembroke Welsh Corgis are slowly finding their way into the hearts and homes of the Indian dog lovers. They are immensely famous in the United Kingdom and are gradually becoming more relevant on the Indian territory. The good thing is that they have a well-made double coated outer surface which not only keeps them fine in the low temperatures but also makes them decently tolerant to hot weather conditions. There are preferably more comfortable in a snowy area but are not that affected in a country like India where mostly the hot and humid conditions prevail. Also, they are a decent breed for Indians because of their adaptability and easy to handle nature. They are an all-around less fussy breed to own and raise, hence a good choice for anyone around the world.

Corgis are categorized as a small breed and rightly so. They are peculiarly short in stature when compared to the rest of the body and have a moderate weight to them. The average weight of Corgis is up to 14 kg for the male and up to 13 kg for the female. They also have an average height of around 10-12 inches.

Corgis are double coated with a thick, water-resistant undercoat which is on the shorter side and a longer and coarser outer coat. The coat on the back region lies flat while there are long strands of hair on the chest, neck, shoulders and the forelegs. Also, their coat is available in various different colors like fawn, sable et cetera.

They have a low-set body with a fairly long neck which is slightly arched and blends well into the shoulders. Chest region is deep with a well-sprung rib cage. They have short forearms which are turned slightly inwards and they also have strong and flexible hindlegs with ample bone to provide sturdiness and balance to the whole body.

They have a fairly wide and flat head which has a fox-like appearance to it. Their eyes are medium in size and oval in shape and are mostly dark colored. The ears are firm, erect and are of moderate size and are quite sound sensitive.

They have a well-made mouth and jaw region with a scissors bite. Their muzzle is of decent length and is neither concaved nor high bridged.

Corgis are known to be very friendly and lively dogs. They are mostly in a happy mood and are filled with positivity. They are quite warm and affectionate to the ones that are close to them and the ones who are meeting them for the first time as well but sometimes can be a bit reserved with other canines. They have a very out-going personality and also possesses a good amount of intelligence as well. General temperamental traits of the Pembroke Welsh Corgi are as follows:

Pembroke Welsh Corgis are mostly recognized all around the world by their distinctively small legs and a low hung back region. They have a cute foxy face and a nice double coated body which makes them quite adorable and notable.

They originated in the United Kingdom and are considered to be the smallest herding breed. Back in the day, they were very popular for herding sheep and cattle. They were also a devoted companion to various different owners in the past including the hunters, shepherds and even the members of the royal families.

Today, they are still very devoted and friendly with their owners and haven’t lost their charm. They are very good at adapting and adjusting to new environments. Whether it be cold conditions or hot, it doesn’t affect them that much. They are happy in both small or large spaces whichever is provided to them. They are considered a decent option for an inexperienced dog owner also.

A Corgi is an all-around dog that is affectionate, sweet, versatile, easy to handle and quite playful and will only bring a stream of positivity and fun into anyone’s life who is looking to raise this tiny-legged doggy.

Coming to their various colors, a Corgi can possess a lot of different colors. We are discussing the Pembroke Welsh Corgis and the several colors that they can possess are as follows:

Home-cooked meals and commercially manufactured foods, both can be good as long as they are approved by the vet and are also suitable for the Corgi. The amount of feeding material should be increased as with the dog’s age. Overfeeding must be avoided and treats are allowed to be given but only in limited amounts.

They are not very happy to sit idle and lazy for long periods of time. They love to be involved in some kind of physical activity like playing games, walking or jogging with their owners et cetera. Regular exercise is highly important to keep the Corgi fit and healthy.

Like with any other breed, training should be started from an early age when the mind is developing and hungry for new knowledge. They should start socializing with others and should be gently exposed to different places and situations from an early age of 7 weeks. They are very intelligent and quick learners and thus are not that hard to train. They response well and positively to various kinds of training exercises which also makes the experience fun for the trainer.

Brushing the coat once or twice per week is recommended for Corgis. They do not require an extravagant amount of grooming but still occasional baths, trimming of nails and brushing of teeth are necessary for them. Also, they are decent shedders and shed the loose hair on a daily basis but in small amounts. They only shed in sizeable amounts once or twice per year, during which daily brushing of the coat and frequent baths can help control and reduce the shedding process.

Generally, a healthy and fine breed, they are still prone to some health-related issues which are as follows:

As mentioned earlier, they are normally healthy and fit and thus, rarely requires the assistance of a veterinarian.

Pembroke Welsh Corgis are supposed to be originated in the United Kingdom, in a small town called Pembrokeshire which is situated in Wales. From here, they get the two-thirds of their name. The remaining part, Corgi was given to them because of their size as Corgi translates to ‘dwarf dog’ in Welsh.

It is believed that that the Pembroke Welsh Corgis are a result of crossbreeding between Cardigan Welsh Corgi and the Pomeranian or the Swedish Vallhund. They were initially used for hunting and guarding purposes but later found their forte in herding various animals like cattle and sheep.

In the year 1925, they were officially called as the Welsh Corgis. At that time, both the Cardigan and the Pembroke Corgis were categorized under the same class and as one single breed. But, after nine years, they were recognized as two separate breeds by the kennel club.

Pembroke Welsh Corgis gradually became very popular in various parts of the world other than the United Kingdom when they were first shown in the U.S. in the year 1936. Their popularity is still very high which can be proven by the fact that they are adored and loved by the British Royalty including Queen Elizabeth II, who is known to own several Corgis.