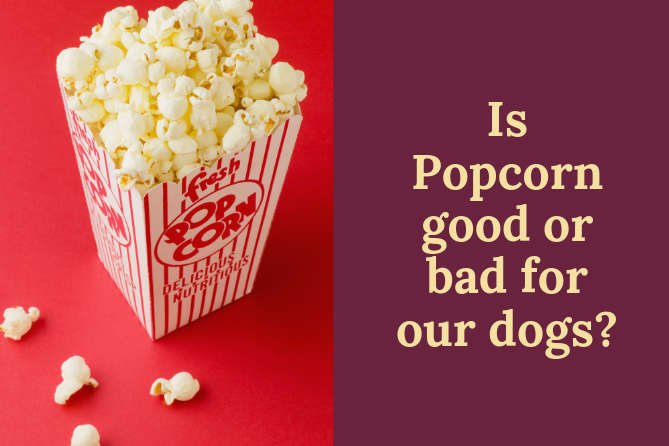 Lets me ask you a simple question, which food or snack comes to your mind when someone says, "Hey, let's watch a movie"? If your answer is not Popcorns, then either you are lying or you hate small starchy things. Well, whatever your answer is, there is no denying that Popcorns are one of the most popular snacks that are enjoyed by millions of people all around the world. These tiny white popped up corn kernels are the go-to snack for a lot of people when they are watching a movie or they just want something to munch. Popcorns are light, tasty and they can be topped with a lot of delicious things such as butter, cheese or caramel.

Now, popcorn is a great snack to share with other people. While enjoying these tasty niblets, you pass on the popcorn bowl to your family members for them to enjoy this munchy snack as well, but what will you do when your four-legged furry family member will come to you in the hopes of getting some of the popcorns (assuming you are a dog parent)? Will you feed these popped corns to your dog or will you be strong enough to say no to your pooch? Before answering these questions, you should first ask yourself, should my dog eat popcorns? Are they any good for him? If not, are there any harmful effects of feeding popcorn to my pooch?

In this article, we'll be answering all these questions and we'll try to eliminate the confusion that is present in a lot of people's minds about feeding popcorn to dogs.

As mentioned earlier, Popcorns (plain) are light snacks which are low in calories, naturally fat-free and they contain several kinds of minerals (although in low amounts) such as manganese, magnesium, zinc, phosphorus et cetera. Some amount of vitamins (A, B, E, and K) and fibers can also be found inside these popped kernels. So, the answer to this question is Yes! Dogs can eat popcorns, but only if they are fed in a very limited manner as although this snack is not toxic for the canines but it can pose some other serious threats for your pooch.

How to feed Popcorns to a dog the right way?

Popcorns shouldn't be fed to a dog on a regular basis. The best use of popcorns is as training treats or training rewards which you can feed to your canine whenever he does something right during the training sessions. Feeding 5-10 popcorns at a time should be fine for your dog.

What kind of Popcorn is suitable for dogs?

The plain and simple air-popped popcorns that don't have any kind of garnishing or topping on them are the best kind of popcorn to feed to a canine. These type of popcorns are not considered to be toxic for the dogs.

What makes Popcorns bad/harmful for dogs?

The various kinds of toppings that we humans love to add in our popcorns make these non-toxic snacks highly harmful for our dogs. These toppings can be:

Are there any harmful effects if one feeds only plain popcorns to his/her dog?

As mentioned earlier, moderation is the key while feeding popcorns to a dog. When given in a limited manner, plain popcorn should not cause any harm to a canine's health but there are some other risks that come with this. Corn kernels can get stuck inside a dog's teeth which may lead to tooth decay or gum disease. Feeding too many popcorns at once can also pose a choking hazard for dogs. So it is better to avoid feeding unpopped or partially popped corns to a canine and it is also a good idea to feed him in a controlled manner. Also, some dogs may be allergic to corns and it feeding popcorns to such canines may lead to various health concerns such as diarrhea, inflammation et cetera. Thus it is better to keep popcorns away from such allergic pooches as far away as possible.

So now it is very clear that Popcorns should not be given as a daily snack to a canine. They can be fed on an occasional basis and that too in limited numbers. Also, not all kinds of popcorns are good for dogs. Those who are garnished with various toppings such as butter, salt, caramel, cheese et cetera should never be given to canines as they are highly harmful to their health. Only plain air-popped popcorns are fine for pooches but make sure they do not get stuck inside your dog's teeth. This can be avoided by only feeding fully popped kernels to the canine.

Also, if somehow a dog has eaten a whole lot of popcorns and he starts to seem a bit unwell (symptoms can be diarrhea, vomiting et cetera), then it is highly recommended to take your pooch to a vet as soon as possible.