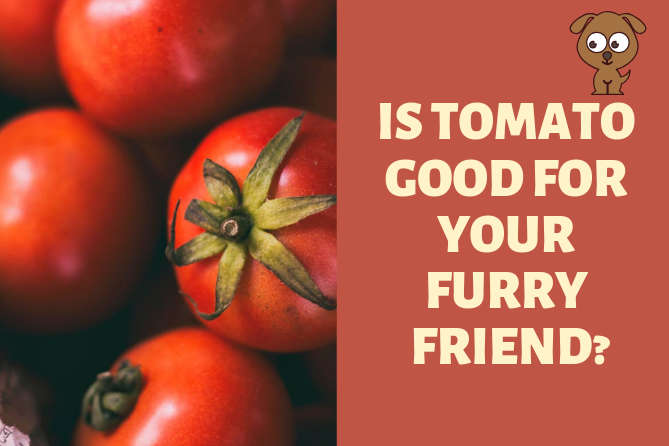 First of all, it is better to clarify what tomatoes actually are? A fruit or a vegetable? Tomatoes are heavily used in our kitchens as a vegetable for savory cooking purposes, but they are obtained from the ovary of a flowering plant and they also bear seeds just like a fruit does, hence there is a lot of confusion among some people whether to consider them a fruit or a vegetable. But speaking strictly in scientific terms, then tomatoes are in fact a fruit. Now, with that argument resolved, we should begin the main discussion which is the title of this article, should tomatoes be fed to our lovely pooches or not? Let’s first see what constituents are present inside a tomato so that we could have a better idea whether tomatoes are good from the inside or not?

Nutritional Elements in a Tomato

Tomatoes are a rich source of Vitamin A and C which are highly useful for the human body for its proper growth and development. And, the number of calories is extremely low in a tomato and also it doesn’t have any fat content either, which makes it immensely suitable for any kind of consumer. But, is all this goodness which is present inside the tomatoes beneficial for a canine too? Or do they in some way or another can harm our sweet companions? Let’s find out.

Benefits of feeding Tomatoes to your dogs

Risks of feeding Tomatoes to your dogs

So now it should be clear that feeding some slices of well-ripened tomatoes is perfectly fine for a dog as long as he/she is not suffering from any major health-related problem. Tomatoes can provide a lot of vitamins and antioxidants to our dogs but they also possess some substances which are not that desirable for a canine’s health. Therefore, this fruit can be used as an occasional treat for the dogs but making it a regular part of a canine’s daily meals is not recommended.