How to Determine a Dog's Age 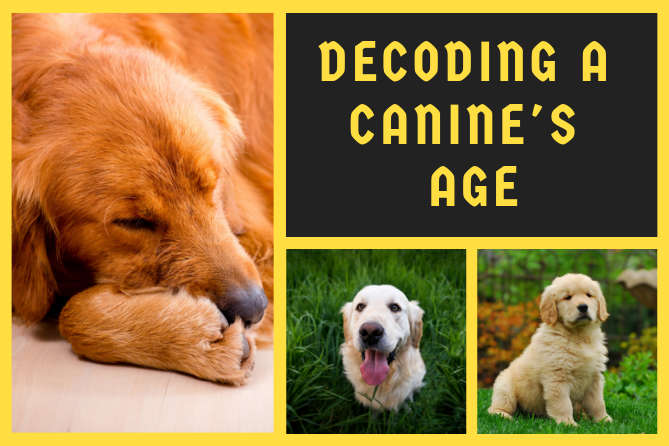 How to identify a Dog's age

Have you ever wondered after meeting a puppy or a dog, how old is this pooch? To know the answer to this question, you ask the canine's owner about the age of his pet. But what will you do if its owner also has no idea how old his pet is? This mostly happens if someone adopts a dog from a shelter home or a rescue group and this is more common in the fully grown canines. Determining the rough age of a puppy is still a fairly easy task but telling the age of a mature dog can be very hard.

There are many signs that you can use to tell the age of a dog. For puppies, these signs are mostly seen inside of their mouth but for grown-up dogs, you have to carefully observe the physical changes that are happening in a canine's body. To make things easier, we have divided a dog's life into three stages and you should be able to easily tell which stage your canine belongs to. These three life stages of a dog are:

Now let's analyze each of these three life stages of a pooch and see what changes one can observe so as to easily tell the age of that dog.

This is a period of development and growth for a pup. Growing Stage begins at birth and it can last for up to 2 Years. But the length of this stage can vary depending on the size of a dog. Small sized breeds usually attain their full size at around 8 to 12 months of age. But to fully grow and develop, a giant breed can easily take around 18-24 months.

In this stage, a puppy goes through a lot of changes. In the beginning, these changes might be fairly subtle but as time passes, it becomes quite easy to see and realize these alterations in a dog's body. Lets closely see each and every step of the growing stage of a canine:

Birth to 5 weeks: In this time period, puppies do not have a lot of physical changes that are easy to notice. For about 2 weeks of age, most puppies are toothless and they are unable to open their eyes properly. After almost 15 days or so, they start to see various things through their eyes but still, their vision is not fully developed at this point in time.

5 weeks to 4 months: This is the period where you'll start to see a great amount of initial development in your puppy. At around 5-6 week, a puppies' baby teeth start to erupt. Just like humans, dogs also have 2 set of teeth, baby (non-permanent) and permanent. After the emergence of first teeth, a puppy will start to playfully bite whatever he could find including your hand, so keep this in mind. A puppy's full set of baby teeth can be seen at around 8 weeks or 2 months of age. After this, from 2 months to 4 months, you will be able to see several facial changes in a puppy. His overall face will start to grow including his jaw region. His muzzle will also begin to grow (this can be more prominent in those breeds who have a long muzzle). Also, a puppy will become a bit more excitable and active in nature during this time period.

4 months to 12 months: In this period, the first major change that you'll see in a puppy is that their baby teeth will fall out and their permanent teeth will start to take place inside their mouth. This usually occurs when a puppy is about 4-5 months of age. Permanent teeth will begin to grow in front of a puppy's month and later they will gradually reach to the back of his mouth. And it can take around 8 months for a puppy's permanent teeth to fully grow. Apart from this, a puppy's overall size and stature will also increase to a great extent during this period. And at around 12 months or 1-year mark, most puppies (small-sized dog breeds) will reach the fully-grown state.

1 year to 2 years: This period is mostly for the Large-sized or Giant dog breeds to reach the fully-grown state. These massive breeds are a bit slow to fully develop hence they need a bit of extra time as compared to small or medium sized breeds. Also, during this period both small and large sized dogs are similar to a human teenager, so expect a dog to act like a teenager too (little awkward at times, very excited and lively at others).

This stage mostly begins when a canine is around 2 years of age. At this point, most dogs have reached their full size and because of this, finding physical changes on a canine can become a bit hard. But if you look closely, you will be able to see those subtle variations in your dog's behavior.

2 Year to 4 Years: During this time, a dog is like fully-grown and matured human and he'll be very active, energetic and excited at most times. Some physical changes can still be seen if you are looking for them. At around 3 year mark, your dog's teeth will start to become a bit dull and their shine will start to fade away if you are not providing proper dental care to your pooch. This is because of the tartar that starts to build up inside a canine's mouth.

4 Year to 7 Years: During this period of Mature Stage, some other changes start to appear in a canine's body. Mainly his hair starts to become slightly grayish in color (this mostly occurs at the end of this Mature stage but in some canines, this can start a bit earlier as well). More dental issues and diseases will occur in a dog if he's not been given proper dental care. Also, in some dogs, cloudiness of eyes can occur at the end of this stage but it doesn't mean their overall vision will also get affected due to this. But, Overall energy level will become a lot less by the end of this stage.

At this point, most canines' body starts to wear down and they begin to show some major signs of old age. But the time period of this stage can again vary in some breeds based on their size. For Giant breeds, this stage mostly comes after they have reached an age of 7+ years (Great Dane). But for miniature and smaller dogs., this stage will only come when they are around 13+ years (Chihuahua). Some general body changes that can be seen in the canines in this stage are Arthritis or other bone/joint issues, appearance of more fatty tissues as usually most canines do start to gain weight during this stage, small moles or warts may also begin to grow on some dogs' body, and dental and eye issues will become a lot more common and severe. Apart from these, a dog's sense of hearing and vision will also be affected when they reach this stage, they will start to show more and more signs of lethargy, they will have long and multiple sleeping sessions and their overall activeness and mobility will be severely affected when they reach this stage. And the end of this stage is extremely painful for all dog lovers and owners as they have to say goodbye to one of the best things that may have ever happened to them.

Now if you want to decode or identify any dogs' age, you can easily do that by looking at various signs and changes that are happening to a dog's body at various points in his life.