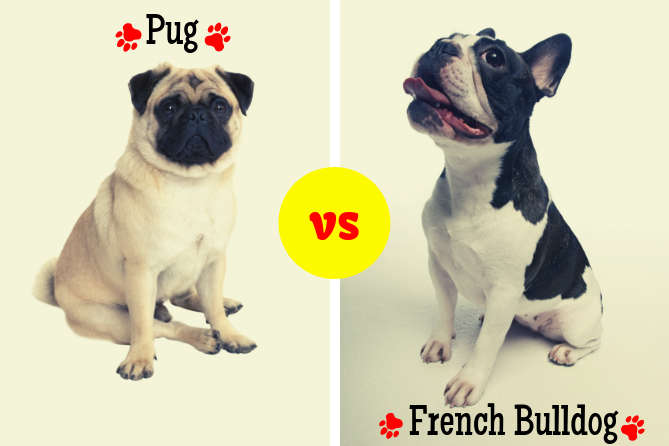 Someone who is hoping to be a parent of a compact and tiny dog will most likely stumble upon these two breeds while searching for a pooch. Pug and French Bulldog are two of the most popular small-sized breeds that are present on this planet. People often get confused between these two dogs as they are quite similar in various aspects. But they also have a lot of differences between one another that people might not be aware of and thus, in this breed comparison article, we'll be pitting Pugs vs French Bulldogs and we will see, in the end, which dog is better? Or I should say, which dog is more well-suited for a particular individual? We'll be covering several areas such as maintenance needs, trainability, health issues, origin et cetera of both these dogs and we'll also be discussing various similarities and differences between Pugs and French Bulldogs.

Pugs are believed to have come into existence around 206 BC during the reign of the Han Dynasty. These dogs were the highly cherished possessions of Chinese royalty and emperors. They basically lived like kings with their owners. French Bulldogs, on the other hand, had a very contrasting origin if we compare it to Pugs. Frenchies were bred by the lace makers of Nottingham (England) to be their companions and lap dogs. This is also a fairly new breed as well and it was developed in the 19th century.

Due to their appearance many people ask this question, are pugs and Frenchies related? And to the surprise of not many people, there is a pretty strong link between these two breeds. It is believed that breeds like English Bulldogs, some Terriers and PUGS were used in the breeding program that resulted in the creation of French Bulldogs. And that's why these two breeds have such a similar appearance.

French Bulldogs further developed into what they are today mainly in France and that is why both the United Kingdom and France are sometimes credited as origin countries for the Frenchies. As far as Pugs go, these dogs moved out of China once the Britishers invaded several Chinese palaces in the 1860s and they took these dogs with them to the U.K. Their again the popularity of these dogs reach to really high standards during the era of Queen Victoria. Both these breeds after spreading their charm all around the world got recognized by AKC (which is a highly reputed Kennel Club) before the end of the 19th century. Pugs were registered in the year 1885 and Frenchies were recognized in 1898 by AKC. Today both these breeds are immensely adored and loved all around the globe but Frenchies do have an edge over Pugs in terms of popularity as they are ranked at #04 spot by AKC as compared to Pugs who are placed at #31 position.

As mentioned above, there is a reason why both these breeds have such a similar appearance. Both Pugs and French Bulldogs are small-sized breeds whose body dimensions are fairly alike. Frenchies have an average height of around 11-13 inches and they come in two weight classes, 9-10 Kg and 10-13 Kg. Pugs also have a fairly similar size, but they weigh slightly less than the French Bulldogs. Their average weight is around 06-09 Kg and they stand tall at a height of around 10-14 inches.

Apart from these size and stature similarities, these two breeds are quite comparable on an anatomical basis as well. Both French Bulldogs and Pugs have a large head (when compared to rest of their body), both of them have big eyes, both have a flat, laid-back or blunt muzzle and both of them also got numerous wrinkles or folds of skin on their forehead. One major difference between these two canines, if we are comparing their facial features, is their ears. Pugs have fairly small and thin ears which are folded while Frenchies' ears are bat-like as they are quite broad at the base and are fairly elongated as well.

Also, taking a look at the rest of the body of both these dogs, then there is not a very big difference. Both Frenchies and Pugs have got small legs, both are compactly built and both possess a short coat that is evenly spread all over their body. Speaking about the coats, Frenchies are mostly found in a Fawn, White, Cream or Sable colored coat while Pugs are commonly seen in a Fawn or Black colored coat.

The maintenance needs of both these breeds are very similar to one another. Both French Bulldogs and Pugs require almost an equal amount of exercise and work (which is not much) so as to remain healthy and happy. Both breeds can be satisfied through regular walking and playing sessions. The feeding requirements are also very much the same. Both should be given a high-quality meal in smaller portions when they are young but as they grow up, the quantity of feeding material should be gradually increased (but the number of portions or servings should decrease as a dog grows up). When talking about their grooming needs, then again there is not a very big difference between Pugs and French Bulldogs. Both have a short and smooth coat which is only needed to be brushed on an occasional basis (although, once every week should be fine) and these dogs only require monthly baths so as to remain clean and fresh-looking. But the shedding potential of Pugs is a little bit higher than the French Bulldogs, hence those who don't want to deal with a lot of dog hair in their homes should take a note of that. Also, both of these dogs are highly people-oriented canines and they cannot live all on their own (without their owners) for a long period of time. They require constant attention and love of their close ones and thus, they both cannot be left alone in the house or outside for a long period of time.

French Bulldogs and Pugs, like any other breeds, have some temperamental traits which are quite similar to one another (both are very much alike in terms of intelligence and learning skills) but they also have some other behavioral characteristics which are not that alike.

Both these dogs are fairly sociable when it comes to meeting new people and strangers, but French Bulldogs, apart from interacting with new people, are not very good at getting along with others. They need proper training from their owners so that they can mingle well with other dogs and cats. They are also not highly suitable for kids if they haven't been trained properly. Pugs, on the other hand, are extremely kind and affable with other dogs, felines and kids (but they also need some amount of training). And because of this, Pugs are known to make better family dogs as compared to French Bulldogs.

While both these dogs tend to struggle when it comes to being a good guard dog, they both do make fairly decent watchdogs instead. Both Pugs and Frenchies remain fairly alert and aware of their surroundings and they can look after their home and property. Also, they are known to alert their owners through their bark if they detect some suspicious person or activity near to their homes. And apart from this, both of them are not known to bark all that much or unnecessarily.

When it comes to training, both of these breeds are again very much alike. They both are moderately easy to train, both of them listen to their owners' commands with fair alertness and are known to follow those commands with all their heart during the training sessions. But these two dogs can also be a bit moody and sensitive and thus, their owners should always teach them the new things calmy and gently. No harsh training or correction methods should be used and if these dogs are learning whatever they are being taught quick enough, then they should also be rewarded for that. Treats or verbal appreciation can be used as rewards for these dogs.

Now being so similar in size, stature and structurally, many people assume these two breeds must be facing similar health issues during their lifetime. But that's not entirely true, and if you ask us, which breed is healthier than the other, Pugs or French Bulldogs, then we do have a clear answer and it is Frenchies.

Pugs may have a better average lifespan than French Bulldogs, but if we look at the overall healthiness or which one is less prone to being unhealthy, then Frenchies do take the cake here. Some diseases are quite commonly seen in both of these breeds like Hip Dysplasia, Patellar Luxation et cetera, but there are a lot of health issues which are more commonly found in one of these canines. Frenchies are more prone to health issues like Brachycephalic Respiratory Syndrome, Cleft Palate etc while Pugs can be affected by various Eye disorders, Legg-Perthes disease, and a health problem known as Pug Dog Encephalitis. And due to the poor general health of Pugs, they are needed to be taken to the Vet's clinic on a regular basis for health check-ups. There is no such need for this for the French Bulldogs because of their overall fitness and good health.

Now, we have finally reached the end of this Pug Vs French Bulldog comparison and it should be a lot more clear to many people now, which breed is more suitable for them. If we talk about Indian owners or people who are confused between these two dogs, they should consider all the above-mentioned points so that they could make a well-informed decision. But if there are still a little bit unclear, then they should also consider these important points as well. They should see which dog is more apartment friendly and adaptable in nature as it is very important for both the dog and its owner that the little pooch lives as comfortably as possible in its new home. Here, both Pugs and French Bulldogs are considered to be really good for the apartment dwellers, but this is also true, they both are not very tolerant of harsh climatic conditions such as excessive heat or cold, hence the potential owners should also be aware of that. Another important point to look out for is the availability and price of a dog in a region. Here, Pugs easily have an edge over French Bulldogs as they are very easy to find in this country and they are fairly cheap as well (₹15,000 to ₹25,000). Frenchies, on the other hand, can be a bit harder to find and they are also pretty expensive to bring home and maintain (₹25,000 to ₹45,000). So, there you go, now it should be very clear to you which breed to go for, just see what you are looking in a canine and then decide which one is right for you. In the end, both of them are amazing breeds and no one would be disappointed to bring either one of them into their home.