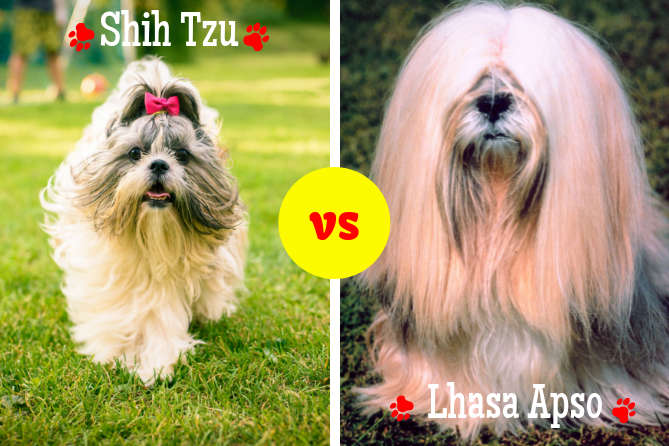 Comparing two very similar dog breeds is not an easy task, but here we are pitting Shih Tzu against Lhasa Apso in this breed comparison article. Both of these dogs have tons of similarities between one another but if you dive a little deeper and do proper research on both these canines, then you can find a fair amount of differences between Shih Tzu and Lhasa Apso as well. And the main purpose for writing this Lhasa Apso vs Shih Tzu comparison article is that we want to answer a very important question that must have crossed the minds of thousands of people while they were deciding which breed to bring to their home or which canine to raise as a pet. If a potential owner is looking for a small sized easy-going dog, then definitely, he/she will get a bit confused between these two amazing breeds at some point in time and thus to eradicate that confusion, we are here help you out and in the end, we will try to answer these highly important questions:

To start off this Shih Tzu and Lhasa Apso comparison, we’ll be looking at how these two dog breeds came to fruition and later we’ll be comparing them on various different levels such as physical appearance, maintenance needs, temperamental traits, trainability, and overall health and fitness.

Lhasa Apso is an extremely ancient breed that came into existence around 800 B.C. These dogs were bred and trained to guard the Buddhist monasteries and they were really good at alerting the monks about any kind of intruders or suspicious outsiders. Shih Tzus, on the other hand, came to fruition a long time after the birth of Lhasas. In fact, it is highly speculated that Shih Tzus were created after mating numerous breeds with Pekingese or Lhasa Apsos. So this might explain the physical similarities between both these canines. After their birth, Shih Tzus were mostly seen as precious possessions of the Chinese royalty which were given to them by the Tibetan Monks.

Now you might be wondering the reasoning behind such unique names of both these dog breeds. "Shih Tzu" is a Mandarin term which loosely translates to "little lion dog" and as these canines were bred to resemble a lion, this name perfectly suits them considering their size and looks. Lhasa Apsos, on the other hand, were given this distinct name because of two reasons. First, they were born in ‘Lhasa' which is the capital of Tibet and second, the term ‘Apso' roughly means bearded and thus this word was used in their name as it perfectly described their hairy looks and heavy coat.

Both Lhasas and Shih Tzus started to move out of their place of origin to other big countries in the 20th centuries. Shih Tzus came to England in 1928 and they were brought by Lady Brownrigg, wife of quartermaster general of north China. Lhasas, in contrast, were brought to the United States in 1933 by the 13th Dalai Lama. Both breeds, after that, were able to spread their charm in several other popular countries as well. The American Kennel Club (AKC) recognized Lhasa Apsos as a non-sporting breed in the year 1935 and it registered Shih Tzus in the Toy group in the year 1969.

As we all know, both these dogs look very similar t0 one another (and because of the above section, you know why they are so similar). Both have a luxurious coat that covers their entire body, both have a compact body with a well-proportioned head and both are tremendously similar in terms of body dimensions as well. Lhasas and Shih Tzus are small-sized dogs whose average height and weight are less than (or equal to) 11 inches and 8 Kilograms, respectively.

Coming to their beautiful coats, both of them have a long and (a bit) dense coat which is definitely a trademark feature for both these canines. These dogs are usually found in a lot of different color combinations which is a good thing for the potential owners as this gives them numerous options to choose from. Lhasas’ common coat colors are Black, Grizzle, Black & Tan, Red, Cream, Golden, Red Gold, and White and Shih Tzus are mostly found in a bi-colored coat with one color usually being white and other colors can be Black, Silver, Gold, Red, Brindle, and Blue. Both Lhasa Apsos and Shih Tzus can be given various kinds of haircuts so that they are able to carry themselves and manage their coats a bit more nicely and easily.

So it is clear that appearance wise, there is a very little difference between Shih Tzus and Lhasa Apsos. Now let's see whether the maintenance needs, behavioral characteristics, and overall health can help us in properly comparing these two cute little pooches.

In this department as well, both Shih Tzus and Lhasa Apsos are very much alike. Both have:

But there is one thing that does separate these two breeds in terms of maintenance needs and it is their shedding potential. While Shih Tzus are not known to shed their fur a lot, thus not requiring any extra brushing or attention towards their coat, Lhasa Apsos do shed their hair on a fairly regular basis (although the amount of hair shed is not that high). This also means during the shedding period, Lhasas' coat is required to be brushed more frequently than usual because brushing can really help in controlling the shedding process to a certain extent.

Both Lhasas and Shih Tzus have a lively and friendly personality but both are highly courageous, intelligent and clever as well. These dogs might have a small structure but they do have a feisty side which they only show whenever it is needed. Let's dive a bit deeper so as to properly compare these canines in terms of behavioral traits and characteristics.

When it comes to overall friendliness, both dogs are very similar. They are great with their owners, loved ones and other pets that might be present in the house such as cats and other dogs. But Shih Tzus are not considered to be that great for kids. These tiny dogs might not tolerate all the antics and quirks of a small child, hence proper socialization and training are extremely crucial for the Shih Tzus. There are no such problems with Lhasa Apsos as they are immensely sweet, kind and careful with small kids. The area where Lhasas do lack a little bit is their friendliness with strangers. Without early socialization, Lhasa Apsos don't tend to get along that well with strangers. And in this area, Shih Tzus are a bit more sociable in nature and they do just fine with strangers and new people. Overall, both these dogs are considered to be good family dogs but Shih Tzus do need to be properly trained so that they mix well with small children that might be present in the house.

Both Lhasa Apso and Shih Tzu are decent watchdogs. They tend to remain alert and aware of their surroundings and they are good at alerting their owners in case of any intruders or trespassers. Both these pooches are fairly territorial as well. But both these dogs tend to make not-very-good guard dogs due to their small size and stature.

If you don’t want a noisy or boisterous canine, then it is better for you to stay away from both these dogs. Lhasas and Shih Tzus are two very vocal breeds who like to express themselves through their bark. They might be cute-looking but they do have a fierce and loud bark.

Both these dogs are not extremely easy to train. They tend to be a bit stubborn and independent at times and this makes their training sessions a lot more difficult and tiring than they should be. But with the right training methods and approach, the owners of both these dogs can train their pooches a little bit faster and a bit more easily. First of all, it is important not to use any harsh training or correction methods as both these dogs are very sensitive in nature. Secondly, their owners should remain very patient and calm during the training sessions. And lastly, they can employ positive reinforcement technique to train these dogs. Owners can use treats or they can verbally compliment their pooches whenever they do something right while getting trained. Once Lhasas and Shih Tzus are in the right mood, the process of teaching them something new becomes a lot easy and undemanding.

Out of these two, Lhasa Apsos are more sturdy and healthy canines. Chances of Lhasas suffering from various kinds of health problems are a bit less as compared to Shih Tzus and due to this, Lhasas are not required to be taken to a vet's clinic on a frequent basis. Shih Tzus, on the other hand, can suffer from a lot of issues during their lifetime if they are not given proper care and attention and thus regular visits to a vet's clinic are required in case of these little lion dogs.

Now there are several health problems which are commonly found in both these breeds such as Progressive Retinal Atrophy, Patellar Luxation and various allergies, but apart from these, there are a lot of diseases which are more common in one breed than the other. In Lhasa Apsos, health issues like Keratoconjunctivitis Sicca, Familial Inherited Renal Dysplasia, and Sebaceous Adenitis are more commonly seen, while diseases and problems such as Distichiasis, Hip Dysplasia, Keratitis, Bladder Stones, and Umbilical Hernias are fairly common in Shih Tzus.

Although we might be addressing only our fellow Indians in this section, this applies to all the potential owners from all around the world. Both these breeds are an amazing option to bring home and raise as a pet. Lhasa Apsos and Shih Tzus are two very similar breeds which are known to make great household pets and a perfect choice for the first-time or inexperienced owners. I know I promised to give a definite answer to the three questions that I mentioned in the beginning, but as you can see (if you have properly read the article), it is extremely hard to pick either one of these two dogs.

But to make things a bit easier for Indian dog owners or soon to be owners who are confused between these two breeds, it is a good idea to compare these two breeds in terms of adaptability, price, and availability.

So as you can see, after doing this further comparison, it is still not very easy to choose one breed out of these two. No one can go wrong choosing either of these canines as they both are equally wonderful and remarkable.