Why Do Dogs Chase their Tails? 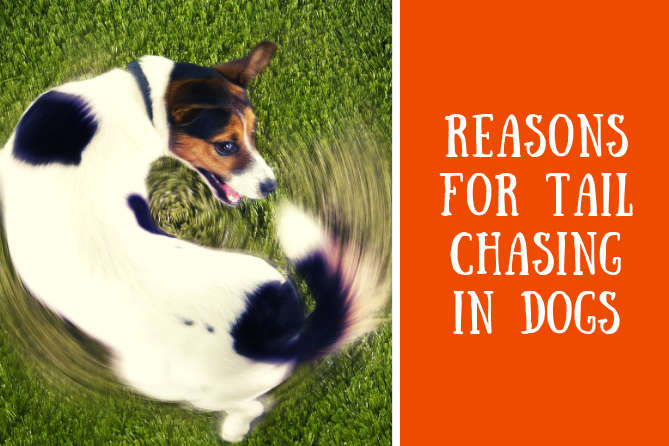 There are a lot of endearing things that our canines are known to do which makes them even more adorable and cuter than they are (which is a lot). People are amused by various activities that their dogs do such as tilting their head when hearing a peculiar sound, jumping on the bed in the morning to greet their owners, constantly gazing into their owners’ eyes while they are having something delicious and many more. While all these actions are fine, there is one particular quirk of a pooch that many people take very lightly but only if they knew why their dog is constantly doing that activity, they would be more concerned about the overall health (both physical and mental) of their pooch. The action/activity we are referring to is "Tail Chasing."

You may have seen a canine numerous times chasing his own tail but every time you must have thought that he is doing this for fun and that is not entirely wrong. But apart from the fun aspect of Tail chasing, there are several other reasons as to why a canine would chase his own tail. These reasons can range from totally harmless to a bit more concerning, so you should always keep an eye on your dog whenever he starts to run in circles so as to catch his tail.

Reasons for Tail Chasing in dogs:

As we all know, every dog likes the attention and love of their owners and family members. They do all kinds of stuff in front of their loved ones so as to get their attention and this includes chasing their own tail. If you find tail chasing amusing and adorable and you reward your dog with your attention whenever he chases his tail, he will eventually learn to use this technique whenever he wants you to notice him. The best way to reduce attention-seeking tail chasing in a canine is not to give any attention to the dog while he’s after his tail. You should look away from your dog if he is chasing his tail because of you and once he has stopped running in circles, you should either pet him or reward him and in this manner, he will learn not to get your attention by chasing his tail.

Dogs that are not getting enough exercise and mental stimulation tend to nip at their tails. They find it entertaining to chase after their tail and they also try to fulfill their exercise requirements on their own by running in circles at a fairly fast speed. This can be easily avoided by providing enough physical activity to your dog that the idea of tail chasing doesn't even enter his mind. Also, games and puzzles that require deep thinking by your dog will keep him engaged and mentally stimulated.

When a puppy or younger canine sees a long hairy appendage chasing him wherever he is going, he starts to chase it back so as to catch it. Puppies are so naive that they don't even know that their tail is a part of their own body. For these small and cute furballs, their tail is kind of a toy and chasing it and biting it keeps them entertained.

Well, puppies chase their tails because they are innocent (and stupid), but there are a lot of older dogs as well that tend to bite and chew their own tail. This is mostly because as a canine starts to age, his mental awareness and sharpness begin to decrease. And due to this, he starts to get into more repetitive behaviors (and activities) such as spinning, barking at the wall (or sometimes nothing), and chasing his own tail.

As we know, many dogs have predatory instincts and they are just hardwired to chase anything that moves. It can be a ball, a small animal or their own tail, if they see some kind of movement, they will immediately start to run after it. This can be reduced by distracting a dog whenever he tries to chase his tail. Distractions can be a fun game, a walk in the park, general petting et cetera. But it is important to provide these distractions before a canine starts to run after his tail as if it is done after he has started, then he will view those distractions as rewards for chasing his tail.

Just like humans, dogs can also suffer from Obsessive Compulsive Disorder. And like humans whose OCD is reflected in their day to day activities like washing their hands multiple times in a short period, double-checking (excessive) all the switches and locks in their house et cetera, dogs' OCD can also be seen in their activities and actions such as constant spinning in circles and chasing their own tail. There are a lot of reasons why a canine might be suffering from OCD such as separation anxiety, stress and depression, but it is important to control it before it gets out of hand. It is important to remove a dog from a stressful situation if he is feeling uneasy. Also diverting a dog's attention if he seems anxious or sad is also very crucial. Canine suffering from OCD may also require the help of a vet or an animal behaviorist who will most likely prescribe a behavior modification medication to the pooch.

Apart from all the above-mentioned reasons, there are numerous medical reasons too because of which a dog might chase his own tail. These are as follows:

So there you go, these are all the reasons that can explain why a dog is going after his own tail. As I said in the beginning, some of these reasons shouldn't be a point of concern for the owners but some of them do require the immediate attention of a dog's parent. If your dog is constantly running after his tail, do pay a visit to his veterinarian. It is highly important to keep a canine healthy, physically and mentally stimulated, well-fed, vaccinated and less tensed or stressed so that these small antics like tail chasing and spinning in circles doesn't become an obsession or something that might prove to be harmful to our lovely pooches. All dog owners should closely look out for any signs of constant tail chasing as it can lead to something very detrimental for our dogs.