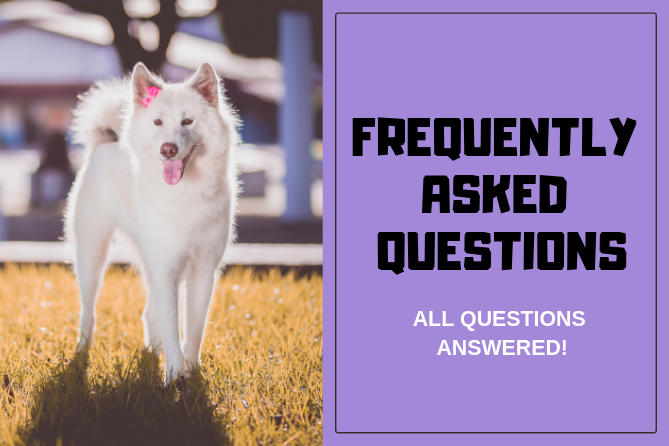 Answer: No! Akitas are not hypoallergenic canines as they do produce a fair amount of dander and they also shed their fur all around the year.

Answer: Well-trained Akitas are generally fairly friendly and warm with kids. These pooches remain careful and kind to small kids and they also like to play loads of games with them as well. But proper training and socialization are of utmost importance when it comes to an Akita’s behavior with a small child.

Answer: Akitas are not considered to be highly canine-friendly breed. These canines can get aggressive with other dogs, especially of the same gender. But Akitas can become cordial and affectionate with other canines if they are properly trained from an early age and they have been properly introduced to a lot of different canines when they are at the puppy stage.

Answer: Most Akitas are fine with other smaller animals like cats. They remain amiable and gentle with the cats and are known to get along fairly well with them. But some Akitas may not be that friendly with other household pets and hence it is important to correctly train and guide an Akita before introducing it to other pets or animals like cats.

Answer: Yes! Akitas are very loyal and protective of their loved ones and they are known to always defend their close ones against any kind of harm or threat. And apart from being a good guard dog, they also make a pretty decent watchdog. These pooches can efficiently look after their homes and property and will alert their owners in case of an intruder or a trespasser.

Answer: Yes! Akitas are known to adjust pretty well to the apartment lifestyle. If their exercise needs are fulfilled on a regular basis, these pooches happily stay inside their homes. But without proper exercise and movement, they may become frustrated and dispirited.

Answer: Although Akitas shed their fur on a regular basis, they do so in a fairly limited manner. But, when the shedding season comes, these canines shed more profusely and during that time, their coat should be frequently brushed as it helps in controlling the shedding process to some extent.

Answer: For an inexperienced or first-time owner, Akitas are not that easy to train and handle and they require a lot of guidance from their owners to become more sociable and cordial with other beings. And, their exercise and grooming needs are also fairly high, hence, these pooches might not be a very good option for a first-time owner. Breeds that are easier to handle and requires not a lot of work from their owners are best suited for a novice canine owner.

Answer: No! Akitas do not like to bark or use their voice for expressing their feelings. These pooches mostly remain very quiet and calm and they only bark when it is extremely necessary like when they are guarding their homes and they detect the presence of a suspicious person. But, apart from it, these pooches do not bark all that much.

Answer: Akitas require a moderate amount of exercise on a daily basis to remain fit and healthy. These canines should be taken to long walks for at least 30 minutes every day either in a park or a yard so that they can freely move and stretch their body. Akitas is also a very playful breed and it loves to play a lot of light-hearted and fun games with its owners and family members, hence, regular playtime is also quite necessary for the Akitas as it not only keeps them in shape but it also makes them happy and cheerful.

Answer: Akitas can live alone in the house for a few hours, but if they are regularly left all alone for a very long time in a day, then these pooches can suffer from separation anxiety and they can become highly sad and demotivated. And, this could eventually lead to various destructive traits like excessive barking, furniture chewing et cetera. Hence, it is recommended not to leave an Akita all alone for very long periods of time.

Answer: Akitas are not that hard to train if an experienced and knowledgeable owner/trainer is involved. These pooches are very loyal and devoted to their owners and loved ones and they do listen to their owners’ commands quite intently, but sometimes they can be a bit stubborn and independent while getting trained and only an experienced owner would know in that situation how to properly handle and control these canines. So, the trainability of these canines is directly dependent on the experience and knowledge of their owners.

Answer: Akitas have moderate to high grooming requirements. Their coat should be brushed at least 2-3 times every week so as to avoid any matting issues. They should be bathed once or twice every month as it will keep them clean and fresh-looking. Their nails should be trimmed regularly and their teeth can be brushed once or twice every week. And, finally, their ears must be cleaned on a frequent basis so that there is no excess wax formation inside their ears that might lead to an ear infection.

Answer: Below Average! Akitas are not that tolerant towards heat and high temperatures. These pooches usually prefer a colder region to reside in, but if someone living in a warmer area wants to raise this breed, then they should provide immense care and attention to the Akitas especially in the summer months as, if these canines are kept in the excess heat of the sun for a long period of time, they can easily get a heatstroke.

Answer: Awesome! These pooches have a thick double coat that provides them enough protection that they comfortably live in a cold and low-temperature area. These pooches love to play and spend time in the snow and hence, they are great for those people who might be residing in a wintry or snowy region.

Answer: Yes! Akitas are decently intelligent canines that have great reasoning and problem-solving skills. Their sharp minds also help a lot while they are learning new tricks and commands from their owners.

Answer: Due to their protective nature for their owners and loved ones, Akitas don’t very easily trust an outsider or a stranger and because of that they are not considered a very sociable breed. These pooches always remain alert and aware of their surroundings and if they encounter a suspicious looking stranger, they may also become aggressive with the person. And, for that not to happen, proper training and socialization become all the more important for these pooches.

Answer: Akitas are moderate droolers. They mostly drool whenever they are about to have their meal or when they want something delicious to eat from their owners. But, apart from that, Akitas are not likely to drool as much as some other dogs like Saint Bernards, Bulldogs et cetera.

Answer: Yes! Akita is a fairly expensive breed both in terms of getting it home from a breeder and then properly maintaining it. A lot of work is required to properly raise this breed as they need regular exercise to remain healthy, regular grooming to remain clean and neat and they also need a lot of training and guidance to become more sociable and well-mannered in nature. Hence, Akitas are surely a high-maintenance breed and thus they are mostly recommended to experienced dog owners only.

Answer: Their availability is pretty decent in almost every major city of India like Delhi, Mumbai et cetera, but that’s not the case with the smaller regions of the country as it is still fairly hard to find an Akita in a not-so-popular region of India, like the rural areas.

Answer: The average price of an Akita puppy in India is around ₹40,000 to ₹55,000. But there are a lot of factors that affect their price in the country and because of that, the cost of bringing an Akita puppy home can go fairly high.

Answer: Most Akitas do like to swim in a big pool or in a lake, but that’s not true for each and every Akita as all canines have a different taste and preference. And thus, Some Akitas do like floating in a big water body, but others might not be that excited to swim or spend time inside the water.

Answer: Akitas are mostly found in the following colors that are listed below:

Answer: Akitas have an above average lifespan of about 10-13 years. Some might even live longer than 13 years of age if they are consistently given proper care, exercise, and nutrition.