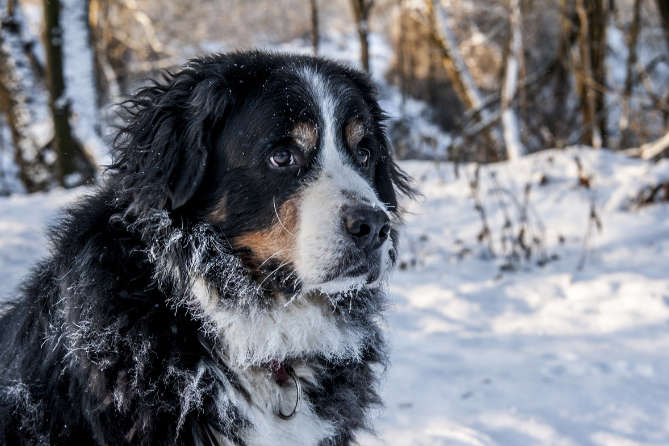 The Bernese Mountain Dogs or as they are commonly called, the Berners are large-sized canines that originated in Switzerland, some 2,000 years ago. These dogs are quite popular in the European countries but they are not in a very high demand in the Asian countries like China, India et cetera. And the main reason that comes to mind, is their low adaptability in the high-temperature areas. They prefer and can easily thrive in cooler climatic conditions which are commonly seen in the European countries, but they are known to struggle and not do so well in very hot regions and a country like India where temperature can go very high, thus, is not a very suitable place for a Bernese Mountain Dog to live. Still, dog admirers and passionate dog owners can fulfill their desire of raising a Berner, but they need to be a lot more careful with it and would have to provide a great amount of care and attention specifically during the hotter months.

The Bernese Mountain Dogs are quite strong, well-built and mainly tri-colored dogs that display a sense of balance and sturdiness from their appearance. Their official breed standards are given below:

The average weight and height of Bernese Mountain Dogs lie between 32-52 kg and 23-28 inches, respectively. The male Berners generally are heavier and a bit taller than their female counterparts.

They have a slightly wavy or sometimes straight coat which is quite thick and is medium in length. Their coat possesses a natural bright luster or shine and is mostly tri-colored.

Berners have a solid and robust body with a muscular and strong neck which is moderate in length. They have a capacious chest area with well-sprung ribs and their back region is quite broad and firm that has a bushy tail at the end. The forelegs and hind legs are sturdy and brawny and provide a good amount of balance to the entire body.

Their head is fairly broad and a bit flat on the top. They have oval shaped eyes which are mostly dark brown in color. The ears are set high on the head and are medium in size, triangular in appearance with rounded tips.

They have a fine jaw region with their teeth meeting in a scissors bite. And, their muzzle is overall quite strong and straight.

The Bernese Mountain Dog is a people-pleasing canine that is very loyal and close to its loved ones. These dogs are immensely affectionate with the people they live with and are always looking to please them and spend time with them. They know how to create a positive environment with their fun-loving attitude and a playful personality. And, these dogs might possess a good amount of heftiness and bulk, but they can run at good speeds when they are in the right mood, which is very impressive for a breed of their size. They are quite well-mannered and well-behaved and are known to listen to their family members’ commands with sincerity. They are a bit reserved with strangers at first but have no problem in mixing and bonding with them if they are properly introduced, and hence, early socialization is important for them. Some general temperamental traits of the Berners are listed below:

The Bernese Mountain dogs are one of the four Swiss Sennenhund breeds that also includes the likes of Entlebucher Sennenhund, Appenzeller Sennenhund and the Greater Swiss Mountain Dogs. The Berners came into existence when the Romans invaded the Alps and the dogs that accompanied them were bred with the native farm dogs.

These dogs are very popular among the farmers and field workers because of their versatile personality and they are quite good at performing numerous field-related tasks. And, as they were raised as farm dogs, they love to live in an open area and thus, are not a very good option for someone who is looking for an apartment-friendly dog.

In spite of that, they make decent family pets because of their affectionate nature towards their close ones. They are quite loving and careful with small kids and also possess a decent watchdog ability which makes them fairly competent guard dogs. They are also very faithful and devoted to their loved ones and are known to stick by their sides through thick and thin.

The Bernese Mountain dogs are tri-colored. And, the three colors that are present on a Berner’s coat are:

And, officially there are no different types or categories of a Bernese Mountain dog.

These dogs require a good quality feeding material which is rich in proteins and nutrients. The amount of food given to them should be gradually increased as with the age. They are prone to get overweight and hence their calorie consumption must be kept under control.

The Bernese Mountain dogs do well with daily exercise sessions. They love to spend time with their family members and they are also fond of going outside the house, hence the best way to fulfill their exercise needs is to take them on long walks preferably in an open area or field. Regular exercise is not only good for their physical health but it is also beneficial for their mental growth and happiness.

The Berners are always eager to please their loved ones. And, hence training them is not that hard as they are happy to listen to their owner’s/trainer’s commands and obey them wholeheartedly. But it is important to note that harsh training methods are not a good option for training these dogs as they can get easily hurt. A reward-based training method with vocal appreciation is the way to go with these pooches.

Their double coat requires a good amount of grooming and maintenance. Brushing of the coat is needed to be done at least 2-3 times a week with occasional bathing and trimming of nails also necessary for them to look neat and tidy. They also shed quite frequently and that too in large quantities. During the shedding period, the frequency of brushing of the coat should be increased and must be done on a daily basis.

The Bernese mountain dogs are mostly affected by the weather conditions if they reside in a hot and humid area. They are prone to get a heat-stroke if they are kept under the direct heat of the sun for a longer period of time. Other health issues that are common in the Berners are as follows:

These dogs should be taken to a vet’s clinic for regular health check-ups at least once a month.

The Bernese Mountain dogs are quite ancient and are believed to come into existence 2000 years ago. Some mastiff-type dogs who came with the Romans to the Swiss Alps are considered to be the ancestors of this large-sized breed.

These dogs were heavily used as farm workers and they helped the farmers in various tasks like pulling the milk carts, driving the cattle to the pasture and also guarding the farm. They were excellent at their job and thus were appreciated by everyone for their hard work.

But when industrialization started to gain traction, this breed’s numbers gradually declined and they were on the verge of becoming obsolete. But, in the 20th century, they saw a revival by the efforts of various people and now they were treated as companion dogs rather than being a farm worker. But, still, some people used them for their farm duties. They were registered by the AKC in the year 1937.