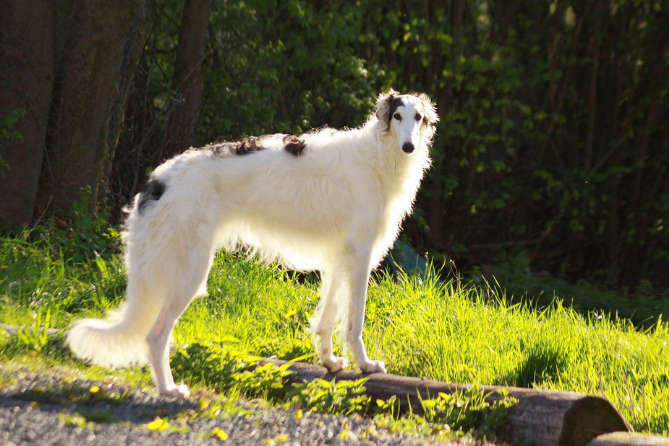 Is Borzoi Dog good for Indians?

Although, Borzoi breed is suitable for a hot country like India because of its good tolerance to heat and high temperatures unlike many other foreign breeds, but its availability and demand are very low in the country. And, the biggest reason for that is the lofty price tag that comes with these dogs. First of all, this breed is very hard to find in India and is only available at a large-scale breeder’s place and that too, mostly in metropolitan cities. And, secondly, the cost of bringing a Russian Borzoi home is exorbitant and can easily go as high as 2-3 lakhs. Therefore, only the financially resourceful section of the society opts for such a high-priced breed, and that is why it is quite rare to see a Russian Wolfhound in India.

The Borzois are large sized sighthounds that hail from Russia. This breed is quite elegant in appearance and is known for its graceful movement. The official standards of the Borzois are given as follows:

The average weight of a Russian Borzoi is generally around 27-48 kg with the male Borzois being a bit heavier than their female counterparts. And apart from being decently hefty, these dogs are also reasonably tall. The average height of the Borzois is about 26 inches (at the shoulders) and higher.

They have a silky, flat and a bit wavy coat which is fairly long in length. The hair is rather curly and profuse on the sides of the back region, neck, hindquarters, and tail. But it is somewhat shorter and smoother on the ears, head and in front of legs.

The Borzois have a well-built body with a slightly arched neck which is quite powerful and sits well on the sturdy shoulders. Their chest region is a bit narrow and the ribs are only slightly sprung. The back region possesses a graceful curve and ends with a feathery tail which is decently long and is carried low. The forelegs and hind legs are quite long, muscular and powerful.

They have a long and narrow head which is a little domed. Their eyes are never roundly shaped and are mostly dark in color. And, the ears are laid back, small in size and have a fine texture on them.

Their jaw region is deep, long and quite powerful with clean and strong teeth. Their mouth closes in an even or a scissors bite. And, the muzzle is fairly long and sturdy.

The Borzois are known for their quiet and calm personality. They prefer to be in a peaceful and less noisy environment and are not that easily excitable in nature. They rarely vocalize and like to remain silent and placid. These dogs are fairly affectionate and friendly in nature towards the people they know quite well. They respect their owner a lot and are quite gentle with their family members. They may seem a little independent and aloof at times, but under an experienced trainer, these dogs can learn to be more obedient quite easily. They tend to remain reserved with strangers and are also not that warm to other canines as well. The basic temperamental traits of a Russian Borzoi are listed below:

This elegant and graceful dog can surprise a lot of people with its speed, athleticism, and endurance. Not only the Borzois are beautiful and majestic to look at, but these dogs are exceptional runners as well and can achieve remarkable speeds in a very little time.

But the things that are talked more about the Borzois are their appearance and price. This breed is very stylish and attractive and possesses a long and silky coat. They carry themselves proudly and are considered a royalty of the canine world. But all of this comes at a fairly large price (literally) as these dogs are very expensive to both purchase and maintain.

Still, if we ignore the hefty price tag, this breed is pretty decent to raise as a pet as they remain calm, composed and quiet most of the times and are known to be fairly less troublesome for the owners when compared to many other hound breeds.\

The Borzois are divided into different types on the basis of the various colors that their coats can have. These colors are as follows:

Borzois at the puppy stage, tend to eat more as compared to when they are fully grown. They require a high-quality nutritional diet to develop and grow into a sturdy and strong adult dog. The food can be home prepared or commercially manufactured as long as it suits the dog. The advice of a skilled vet can be taken while selecting the feeding material for this breed.

These dogs require a decent amount of exercise on a daily basis. They enjoy long runs and walks with their owners. But it is important to keep them on their leash when they are in an open area which is not fenced properly as they are extremely fast runners and it will be highly difficult for anyone to keep up with them. Also, it should be noted that any kind of exercise around the mealtimes should be avoided as it can be harmful to their overall health.

These dogs are considered to be somewhat independent and difficult to train. They become bored and less interested if the training exercises are repetitive and monotonous. They are more likely to learn things and commands faster if they are getting trained by an experienced owner as a knowledgeable owner would know how to make the training sessions more fun and engaging for this breed. Also, early socialization and obedience training is very important for this breed to grow into a well-mannered and obedient canine.

Being a long-coated breed, they require a reasonable amount of grooming and maintenance of their beautiful coat. Weekly Brushing with a pin brush, occasional baths, and trimming of nails are all necessary for this breed to look neat and tidy. But, during the shedding period which can come one or two times a year, they shed in heavy amounts and then they have to be brushed more frequently to remove loose hair and avoid any kind of mat formation.

Borzois tend to remain healthy and fine for most of their lifespan, but still being a large sized breed, they are prone to some health-related problems which are as follows:

Although this breed tends to remain fairly fit and fine, they should be taken to a vet’s clinic on a regular basis for general health check-ups and consultation.

The Borzois came into existence around the late 17th century and were a result of the cross-breeding between some Russian Sheepdogs and Greyhounds.

They were exclusively used by the Russian aristocrats to hunt wolves. These dogs rarely relied on their sense of smell for tracking their target, but, instead used their sight and sense of direction to point towards the location of the wolves. And, that’s why they were also known as Russian Sighthounds.

These dogs were exceptionally fast and were used in long hunting expeditions. Their great speed was the inspiration behind their name as Borzoi comes from a Russian word Borzii which means fast or swift.

Their numbers declined after the Bolshevik Revolution and very few Borzois were left. But some dedicated breeders including a soldier named Constantin Esmont managed to revive the breed through careful and meticulous breeding strategies.

After that, they slowly started to get imported to other countries like the U.S., Canada et cetera. They became very famous and popular in those regions as well. And later, in the year 1891, this breed was finally recognized by the AKC.