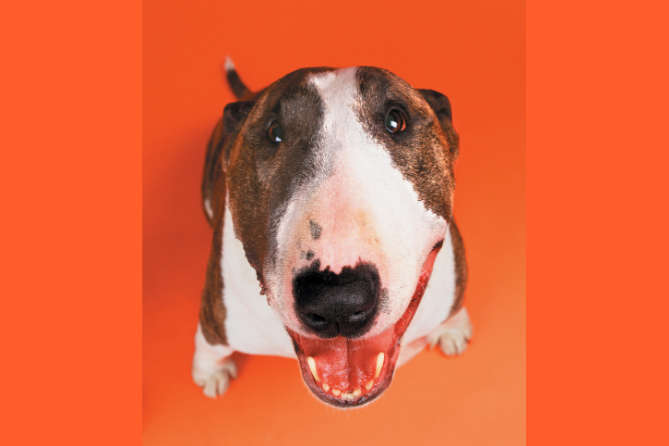 Bull Terriers are not that common in India. They are not very easily available in the country and if available, they should only be bought or adopted from a trusted breeder. Although, they are a good fit for a country like India as they are not highly affected by the hot climatic conditions that are common here, the reason for their below average demand and availability is still not clear. The cost of bringing a Bull Terrier home is quite high, so that might be the logic behind their subpar numbers in the country. But keeping that fact to the side, overall, a Bull Terrier is a decent option for any potential dog owner residing in India, if they are looking for a dog who is clever, playful, even-tempered, protective in nature and is also adaptable to harsh climatic conditions (summer months) that are prevalent in the country.

The Bull Terriers are symmetrical, well-muscled and strongly built dogs. They are quite active and energetic and carries a keen and clever expression on their faces most of the times. Official standards for the Bull Terrier are given below:

Bull Terriers are sturdy dogs and hence they have a certain heft to their body. Male Bull Terriers are heavier than the female bullies, but they both are almost identical in stature. The average weight of Bull Terriers is around 20-32 kg, while their height is between 18-22 inches.

They have a harsh-textured flat-lying coat which has a glossy appearance and is shorter in length. Their skin is tight-fitting and without any wrinkles. Their coat is mostly available in white color or any combination of white with some other colors.

They have a well-made strong body with a long and muscular neck which is arched and free from any loose skin. The Chest is broad and deep and the back region is short and sturdy. Forelegs and hind legs are straight, moderate in length and are well coordinated.

They have a distinct egg-shaped head which is robustly built. Their eyes are triangular in shape and small in size and are set high on their head. The ears are mostly thin and small and are placed close together.

They have a well-defined and deep underjaw. Teeth are sound and strong and perfectly regular. The muzzle is short and slightly blunt.

Bull Terriers are considered to be a bit stubborn and independent. They do have an affectionate nature towards their family members and the ones close to them. They can be more disciplined and obedient in nature if trained from an early age using proper techniques and methods. They are happy to meet new people and become close to them quite easily but they remain a little reserved with other canines and do not share the same level of warmth and friendliness with them like they do with other individuals. Also, the Bull Terriers are highly active and agile in nature and loves to spend their energy on some intense physical tasks. Basic temperamental traits of a Bull Terrier are listed below:

The Bull Terriers are medium sized dogs with a strong and resilient personality. They are very easily identifiable because of their egg-shaped head that carries a keen expression. They have an overall sturdy and robust appearance which is appreciated by everyone.

They are believed to be used in dogfighting rings in the olden times and that might explain their high level of intensity and endurance. Although they had such an aggressive and ferocious past, the Bull Terriers are very loving and affectionate, especially to their family members. They are also quite protective of them and have an awesome watchdog ability.

Any potential owner looking to raise a Bull Terrier must be aware of its positive as well as some negative aspects so that he/she can make a well-informed decision.

There are a large number of different types of terriers. But, we are focusing on the Bull Terriers which can be divided into various types on the basis of the distinct colors that they can possess. Hence, different colors that a Bull Terrier is available in are as follows:

Bull Terriers require a decent amount of high-quality diet. The amount of feeding material should be increased with the Terrier’s age. One thing to note is that their diet should be rich in calcium as it helps in making their bones sturdier and robust. For fulfilling their calcium needs; whole milk, yogurt, and broccoli can be given to them.

Regular exercise in moderate amounts is highly necessary and beneficial for maintaining their health and body intact. Playing sports and games with them, taking them on long and brisk-paced walks will be good for them. They are fond of spending their energy, hence must not be made to sit idle and inactive for longer periods of time.

Terriers in general, are a little stubborn and free thinker by nature and hence they can be hard to train for some people. But if the trainer is consistent and passionate, and makes the training more interesting, then the Bull Terriers responds positively towards it. The important thing to note is to start their obedience training from an early age so that they will listen to their trainer’s commands more carefully and sincerely in the future.

They don’t require a lot of grooming to look tidy and fine. Brushing their coat once a week with a soft-bristled brush will help in removing the loose hair. Occasional baths and ear cleaning are also necessary to keep the dog neat and clean. Also, they are average shedders and sheds their coat on a seasonal basis.

For regular check-ups, the Bull Terriers require Frequent visits to a veterinarian’s clinic.

In the 1800s, a sport called Bull-baiting was immensely popular in some parts of the United Kingdom. Bulldogs were used for this sport and they had immense courage and ferociousness to compete against the bulls.

Later, the Bulldogs were crossbred with white English Terriers and supposedly, the Spanish Pointers. This cross breeding gave rise to a new breed which is now known as the Bull Terriers.

Later in the 1860s, the use of these dogs in the fighting rings declined and people started appreciating their affectionate and protective nature. And, now they were starting to be kept as family pets in various parts of the United Kingdom.

Later when they moved to the United States, they were adored and loved by the Americans also and gradually their popularity increased in other parts of the world too. In the year 1885, they were finally recognized by the AKC as a distinct breed.