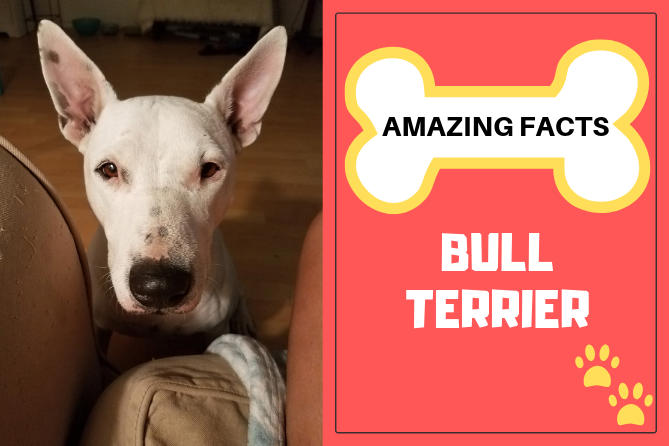 Here are some fun and fascinating facts about the Bull Terriers that will surely surprise a lot of people!

A highly vicious and brutal sport called bull-baiting was immensely popular in some parts of the United Kingdom in the 1800s. In this sport, a canine was used to bait a bull who would attack the pooch and the dog had to compete with this large animal for the entertainment of the crowd. The Bulldogs, due to their ferociousness and courage, were used for this sport, but, when they were crossbred with various terrier-type canines such as the white English Terriers, a new breed was formed which was given the name Bull Terrier (BULL dog+english TERRIER). As these newly formed canines had the same qualities that a Bulldog had, they also began to get used for a dangerous activity and were forced to fight in dogfighting rings.

As the Bull Terriers had the fearlessness and tenacity of an English Terrier and they had the strength, courage, and power of a Bulldog, they were able to perform really well in dogfighting rings and because of that, they were nicknamed as Canine-Gladiators. Some people also called them the White Cavaliers as they were only found in a white colored coat.

The long egg-shaped face is probably the most distinct feature of these Bull Terrier canines. But apart from this, they also have triangle-shaped eyes and a blunt muzzle.

Due to their piebald coats, the Bull Terriers are more prone to deafness and hearing loss than many other non-piebald breeds. This is because canines with such spotted coats have a low concentration of melanocytes in their inner ear which can eventually cause hearing problems.

Dogfighting rings and other dangerous sports like Bull-baiting were banned in England in 1835 when the Human Act was passed. This led to a decline in the use of these Bull Terriers canines in dogfighting rings and gradually, people started appreciating their loving and affectionate side and after only a few years, in the 1860s, the Bull Terriers were only seen as a companion and a friend and their past life as a vicious fighter was mostly forgotten by most people of the United Kingdom.

The Bull Terriers’ popularity as a companion dog rose once the dogfighting rings were banned. And, as they started to get more and more famous in other countries as well, the American Kennel Club registered them as a distinct breed in the year 1885. And, only after 12 years of being recognized by the AKC, the official Bull Terrier Club of America was created.

The Bull Terriers are considered to be awesome dogs for families or someone who needs a true companion. These canines have a kind and gentle personality and they are known to remain highly devoted and faithful to their owners and loved ones. They are also very careful and protective of small kids and are happy to play numerous games with them.

Traditional Bull Terriers are about 18-22 inches tall and they weight somewhere between 20-32 kilograms. But there is a separate breed out there which, going by the looks, is basically a smaller version of the Bull Terrier canines. Known as the Miniature Bull Terriers, these pooches weigh about 11-15 kilograms and are only 10-14 inches tall.