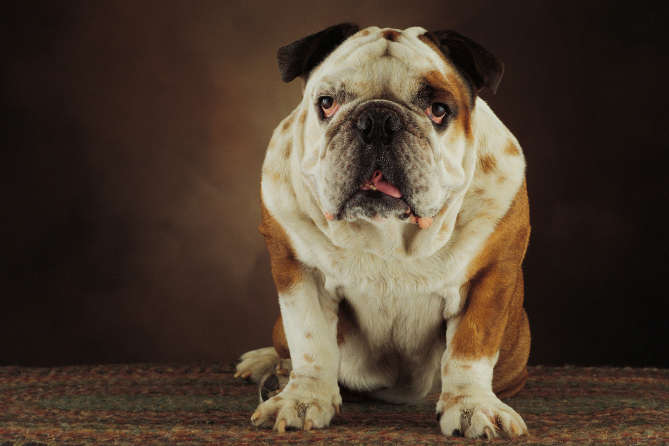 Is Bulldog good for Indians?

Due to the below average resistance of Bulldogs towards hotter conditions, they are not a very suitable pet for a country like India. They are prone to minor heat strokes if kept under the exorbitant amount of heat for longer period of times in the summer months. Elevated temperatures are highly harmful to their overall health too. And, this is one of the numerous reasons that Bulldogs are not very common and readily available in India. And, if available, they are generally on the expensive side and are not pocket-friendly.

Bulldogs are medium-sized dogs having a low swung body. They have a sturdy and strong appearance with a resolute disposition. General standards for Bulldogs are listed below:

Bulldogs are decently weighted but because of their shorter height, they appear to be a bit bulky. The average weight of a grown Bulldog lies anywhere from 22 to 25 kg and the usual height range is 12-15 inches.

Their coat is shorter in length, straight and flat-lying having a smooth texture with a glossy appearance. There are a large number of colors in which a Bulldog’s coat can be found such as white, fawn, red, piebald et cetera.

Bulldogs have a very capacious body with a broad and short-legged appearance. Chest region is deep and wide with broader shoulders complementing it. Forequarters and hindquarters are muscular and heavy giving the Bulldog a significant amount of stability. Also, hind legs are longer in length than the forelegs.

Their head is quite strong and large with a flat forehead. There are numerous wrinkles or folds of skin present in the head region. They have medium-sized round eyes which are mostly in a darker color. Ears are small and thin set high on the head. Their nose is large and black with wide nostrils.

Their jaws are massive and broad and the lower jaw is protruding considerably outwards than the upper jaw. The muzzle is broad and short and is turned upwards.

Bulldogs are kind-hearted and friendly in behavior. They are warm towards most of the beings but sometimes act aggressively towards other dogs of the same gender. They are considered to be quite courageous and tenacious. They have a fairly adaptable and docile character. Principal temperamental traits are given below:

Due to their sheer strength and a powerful body, Bulldogs were used to bait the bulls in the name of a sport in the 1880s. And, this is the source of their name, their ability to compete with a bull in an arena. These contests were very famous in the United Kingdom.

Modern-day Bulldogs are quite different from their ancestors and are friendlier and less ferocious in nature. They are considered to be a symbol of valor and boldness. They have an affectionate attitude towards their loved ones and are very happy to spend time with them.

Before owning a Bulldog, potential owners must have all the knowledge about their various quirks and characteristics, which might be helpful in the decision-making process. Some of them might be favorable for the owner and others could be a deal breaker. Listed below are some pros and cons regarding a Bulldog:

There are quite a few types of Bulldogs which are in some shape or form different than one another. Common Bulldogs types are:

Bulldogs also boast a vast range of coat colors. They possess various solid colors as well as different combinations of those colors.

Bulldogs require a good quality and a good amount of food which can be either home-cooked or commercially manufactured. As the Bulldog grows, the number of times it needs to be fed reduces but the amount to be fed increases. If Bulldog starts to show signs of obesity, then an alteration in the diet is advisable as per the instructions of a Vet.

Bulldogs are a bit laid-back but they should be given a moderate amount of exercise regularly to keep their health in check. Short walks are beneficial but must be avoided during the hotter and humid months as Bulldogs may suffer breathing problems.

Bulldogs response positively to various training exercises. They are very affectionate towards their trainers and loves to please them. Bulldogs also loves to chew on stuff like toys and they must be taught from an early age when to release stuff from their mouths on command. Also, treat or kibble feeding while training is acceptable but in limited quantity.

Regular brushing for about 10-15 minutes twice or sometimes three times a week is required. Bulldogs face should be cleaned with a dry cloth after feeding to make sure there are no moisture or food particles in the folds of the skin. Bulldogs are not known to be very heavy shedders, but if they shed frequently, a rubber brush might be helpful.

Most common health issues arise in a Bulldog due to overheating. If they are left outside under the extreme heat of the sun, it can have a very harmful effect on their health. They are also prone to various respiratory problems because of a shorter muzzle. Some other health issues which can be seen in a Bulldog are:

Bulldog requires frequent visits to the Veterinarian for regular check-ups. Their weight should be monitored on a regular basis and any alteration (mostly gaining) must be discussed with the vet.

Bulldogs are believed to be descendants of mastiff-type dogs. Their ancestors were known to be very ferocious and aggressive and that is probably why they were banned on the streets in ancient Rome.

In the 13th century, there was a famous sport called ‘bull-baiting’ involving a bull and a dog in which the dog had to compete with the bull using its force. Ferocious dogs used in this sport earned their name from it and were called as Bulldogs.

But around the year 1835, bull baiting became illegal in England, and this led to the downfall in the numbers of the powerful breed. The admirers of the breed joined hands together to save them. They implemented selective breeding techniques and breed the dogs that were gentle and amicable in temperament.

And, this helped in reviving the breed and created the Bulldogs that we now know. They were recognized as an official breed of dog in 1890. They still carry the same name as their ancestors but they have a very different character and personality.