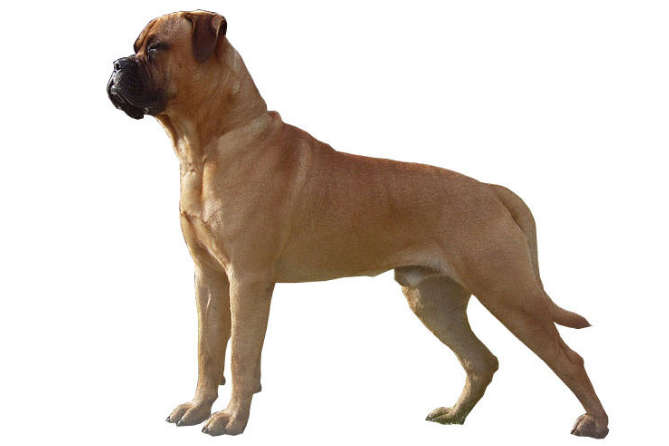 Is Bullmastiff Dog good for Indians?

The Bullmastiffs are slowly becoming quite popular in India and their demand is also increasing at an even rate. But, it is very important to bring them home only from a trusted and reputable breeder. They are quite loyal and devoted to their owners and Indians do like a reliable and obedient dog. But, as they have an average heat tolerance, they must be given extra care and attention during the summer months when the climate becomes very hot and humid. They are a bit on the expensive side when it comes to purchasing them but they compensate for that fact with their low grooming needs and fairly elementary maintenance.

The Bullmastiffs are powerfully built dogs that possess great strength and endurance and displays a high level of alertness. They have a symmetrical appearance with a keen expression on their face. The official standards for the Bullmastiffs are given below:

The Bullmastiffs are large sized dogs and they have a decent stature and mass. Male Bullies are slightly heavier and taller than their female counterparts. The average weight of a Bullmastiff lies between 45-60 kg while its height is somewhere around 24-27 inches.

Although their coat is shorter in length, it is also fairly dense which provides them with adequate weather protection. Their coat is available in mostly red and fawn color tones.

They have a robust and well-made body with a slightly arched neck which is quite muscular and medium in length. Their back region is short while the chest area is deep and wide. Their tail is set high and is strongly rooted. The forelegs and hind legs are both well-developed and muscular and provide ample support to the whole body.

They have a large sized head which is quite broad and possesses a fair number of wrinkles when alert. Their eyes are moderate in size and mostly found in a dark color. They also have V-shaped ears which are set wide apart and quite high on their head.

Their jaw region is strong with large canine teeth set wide apart inside their mouths. The muzzle is quite deep and broad and is preferably dark.

The Bullmastiffs are fairly calm and docile canines. They may appear large and powerful but they are extremely tender and gentle. They mix well with almost everybody but remain a bit restrained with the ones that are not known to them. They are quite affectionate and friendly towards their family members and are also careful about small kids. They are also very loyal to their owners and will never leave their side. Also, they are quite alert and aware most of the times and are fairly territorial by nature. General temperamental traits of the Bullmastiff are listed below:

The Bullmastiffs are one of the gentle giants of the dog community. They are quite big in both stature and bulk and yet they are equally calm, gentle and caring in nature. They love and respect their owners and family members to the fullest and are known to stay by their side through thick and thin.

Bullmastiffs are also known for their courageous and confident personality. They were bred for guarding purposes in the olden times, and hence they are still very protective about their homes and the people living inside them.

They make a very good companion and family dogs because of their reliable character, their caring attitude towards small kids of the house, their fairly adjustable nature and their playful personality which makes the whole experience of raising them both fun and less-burdensome for the owners.

Anyone looking for a Bullmastiff to raise as a pet will be very happy with their choice, but the only thing to look out for is their high affinity for health-related issues which makes their life-span a bit shorter. A potential owner must be able to provide proper care and attention to them so that the Bullie can live a relatively long and prosperous life.

The Bullmastiffs are unofficially categorized into various types on the basis of the regions from where they originate in the present time. These different types are as follows:

When talking about the different colors that the Bullmastiffs can have, then they are mostly found in shades of fawn and red colors and some combinations of both of them. Most common colors are:

In order to ensure their slow and steady growth, it is recommended to give them large breed puppy food when they are younger. Meals should be given in small amounts but at several regular intervals to the puppies. When they start to grow, the number of meals should be reduced while the quantity given must be gradually increased.

The Bullmastiffs are quite playful and love to play games and spend time with their family members. They require a decent amount of exercise which they can get from regular long walks in a park or field. But, any exercise immediately after a meal can prove to be harmful to their overall health.

They are fairly trainable dogs but the trainer/owner should have had some kind of experience in dog training so that the whole process can be made a little easier and quicker. Early socialization and obedient training can prove to be highly beneficial for them in the long run. Firm and consistent training is the key to teach them new things and commands. They are generally quite responsive and agreeable while getting trained, hence the trainer must not lose their interest.

They have minimal grooming needs because of their short and dense coat. Brushing only once a week and occasional bathing is enough to keep them looking fine and crisp. But, the skin should be checked for any signs of dryness or oiliness regularly. Also, they are seasonal shedders and mostly sheds in small amounts.

Bullmastiffs are prone to various kinds of health-related problems which makes their life-span quite short. Common health issues found in the Bullmastiffs are as follows:

The Bullmastiffs require a regular body and health check-up from a skilled veterinarian, hence these canines need the vet’s assistance on a frequent basis.

As their name indicates, the Bullmastiffs are the product of a cross-breeding between Bulldogs and Mastiffs. It is believed that the ratio of Bulldogs to Mastiffs was 2:3 in this cross-breeding.

And, there was a very specific reason for their breeding. Around the 19th century, the English gamekeepers wanted a dog that could track and stop poachers and thieves. They wanted the dog to hold the poachers down but not maul them. Hence, they started breeding between different breeds and after a specific and careful breeding between the Bulldogs and the Mastiffs, the Bullmastiffs were born.

They slowly became famous because of their protective and guarding instincts and their popularity spread to different parts of the world too. And, in the year 1934, they were recognized as an official breed by the Kennel Club of America; 10 years after they were registered by the English Kennel Club (1924).