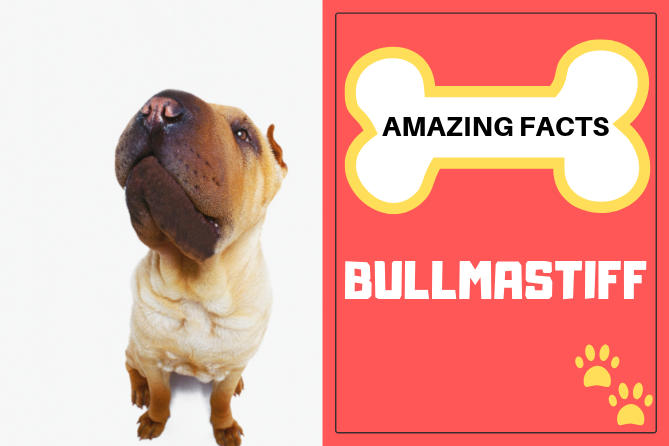 INTERESTING AND FUN FACTS ABOUT BULLMASTIFF

Here are some fun and fascinating facts about the Bullmastiffs that will surely surprise a lot of people!

As indicated by their name, the Bullmastiffs are the result of a cross-breeding that took place in England in the 1860s between the Bulldogs and the Mastiffs. It is believed that the ratio of Bulldogs to Mastiffs was 2:3 in this cross-breeding.

The average life expectancy of the Bullmastiffs is around 8-10 years, which is very common for breeds of this size and stature.

Bullmastiffs’ coat might be fairly short in terms of length, but it is also decently dense and thick in nature which makes it fairly resistant to various kinds of harsh weather conditions like rainy, snowy et cetera and thus it provided adequate protection to these large-sized canines.

Unlike many other large-sized breeds, the Bullmastiffs are tremendously adaptable in nature and they are known to adjust pretty well to an apartment lifestyle. They are fond of spending their time with their owners inside their homes and are thus considered to be really good house pets.

Around the 19th century, the English gamekeepers wanted a dog that could track and stop poachers and thieves. They wanted the dog to hold the poachers down but not maul them. Hence, they started a breeding program between different breeds and after a specific and careful breeding between the Bulldogs and the Mastiffs, the Bullmastiffs were born. And, after their birth, the Bullmastiffs were very effective at defending and protecting their owners’ properties and wealth from thieves and poachers.

In the1920s, John Davison Rockefeller who was a huge industrialist, businessman and a philanthropist brought few Bullmastiffs to the U.S. to protect his property and estate that was located in New York. Today, Rockefeller is considered to be the richest American of all time.

In 1924, the English Kennel Club registered the Bullmastiffs as a distinct breed. And, after some years, when their popularity began to rise in other parts of the world as well, the American Kennel Club also decided to recognize this breed and officially register it in the club in the year 1934.

The Bullmastiffs are immensely calm and docile canines. They might have a humungous structure, but they are tremendously gentle, kind, and tender in nature. With proper guidance and training, these canines are good with almost anybody including kids, new people, other animals et cetera.

These pooches are extremely loyal and devoted to their owners and family members and they also possess great protective instincts for their loved ones. Bullmastiffs were bred specifically for guarding purposes and that combined with their immense devotion to their close ones results in a super effective guard/watchdog. These dogs are highly efficient at protecting their homes and they are extremely good at alerting their owners in case of an intruder or a trespasser.

The breed Bullmastiff came under the limelight when this large-sized pooch was used in a Hollywood movie (that now has a huge fan following) named Rocky starring a very young Sylvester Stallone. But many people didn’t know at the time and some might still be unaware that this dog was no trained canine actor, but he was Stallone’s own pet. Due to budget issues, Stallone couldn’t afford a trained canine, so he decided to use his own pooch in the movie.

Other than Sylvester Stallone, celebrities like Bob Dylan, Christina Aguilera, Jon Bon Jovi, Michael Bay, and Marlon Brando can all call themselves a proud parent of a Bullmastiff canine.