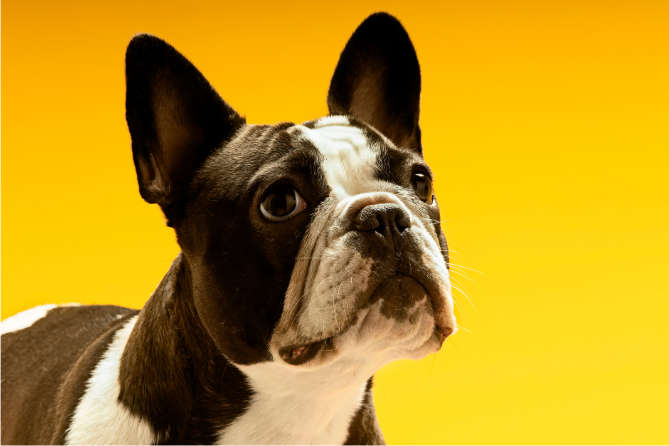 Is French BullDog Good for Indians?

French Bulldogs have various similarities and dissimilarities with the English Bulldogs. One aspect that is common in both of these Bulldogs is their tolerance level towards high temperatures. Like their English brothers, French Bulldogs also are not very comfortable in the excessive heat and areas where hot weather conditions are prevalent for most of the year. Hence, these French canines are not a very good fit for Indian conditions. The availability of high-quality French Bulldog Puppies is also not very high in India.

As stated above, they are smaller in size than their English counterparts, hence they are both shorter and lighter than U.K. Bulldogs. The average height of French Bulldogs lies between 11-13 inches. And, the average weight should always be less than 13 kgs. There are two weight groups for French Bulldogs: 9-10 kg and 10-13 kg. Frenchies weighing above 13 kgs are prone to obesity.

They have a smooth coat which is shorter in length. They also have wrinkles of skin forming on their head and shoulder regions. Fawn, Brindle, White and some more are the acceptable coat colors.

They have a close to the ground body which is well rounded. Chest region is deep and broad. Forelegs are shorter than the hind legs. But both are strong and muscular.

They have a large (compared to their body) and mostly square-shaped head with dark colored eyes that can be brown or a lighter tone of black. Their ears are quite distinct, elongated and broad at the base, appears to be similar to bat ears.

They have a square and deep jaw region with a broad and well laid-back muzzle.

French Bulldogs have a friendly and affectionate nature. They are fairly easy-going and are considered a good choice for a novice dog owner. They are quite playful and lively and remains in a good mood for most of the time. They are reasonably alert and aware and have a decent watchdog ability. Primary characteristics of French Bulldogs are:

While purchasing or planning to own a Bulldog, the potential owners should be aware of the subtle differences between different types of Bulldogs. Strictly speaking about French Bulldogs, they are very adjustable dogs and are a good option for someone with a smaller area and space available.

Frenchies are also recommended to new dog owners who are looking to own a Bulldog because of their easy-going attitude. They are very affectionate towards their family members and are happy to spend time with them. They are fairly easy to train because of their agreeable nature and they also have a lot less grooming requirements.

The only noticeable downside of this breed is their tendency to get affected by high temperatures. They are not great at resisting heat and can have a heat stroke if kept under direct and excessive harsh heat of the sun for a considerable amount of time. Future French Bulldog owners should be highly careful while taking their dogs for a walk in the summer season and should always keep them hydrated and cool.

Frenchies can have numerous other colors that are not that common or seen frequently and are considered to be quite rare. These rare colors are:

French Bulldogs requires a quality meal rich in vitamins, minerals, and other nourishing substances. Compared to English Bulldogs, their feeding needs are less both in frequency and amount. But, the owners should watch out for any intimation of weight gain that may lead to obesity as an obese Frenchie can develop various health problems mainly the orthopedic ones.

The Exercise needs for French Bulldogs are quite similar to English Bulldogs. They both are satisfied by regular walks for a brief amount of time in a pleasant environment. Playing small games with them or spending quality time on the outside is also beneficial for them and can fulfill their exercise requirements.

Training a French Bulldog is generally easy. They are known to be people pleasers and loves to listen to their owners. They should be taught the difference between bad and good habits at an early age. Early socialization is also normally beneficial for them and using positive reinforcement technique while training goes a long way.

With low grooming requirements, they are fairly easy to maintain. Occasional brushing of hair with a soft medium bristle brush is more than sufficient. Brushing of the coat have two major pros, it helps in removing loose hair and promotes the growth of new hair. Bathing the Frenchie and trimming of nails should be done when required. Coming to their Shedding level, Frenchies are decent shedders and do this on a regular basis.

There are fewer health problems seen in the French Bulldogs compared to the English Bulldogs. Frenchies are more likely to remain healthy than their English counterparts and thus are rarely taken to a veterinarian.

As mentioned earlier, the French and English Bulldogs have quite a different origin. As we know, the English Bulldogs were bred for fighting and competing with a Bull in arenas. They were very ferocious and aggressive in nature and were appreciated for their courage and intensity.

French Bulldogs, on the other hand, were bred as companions for the lace makers in Nottingham, England around the 19th century. The workers wanted a toy-sized version of traditional English Bulldogs with a warm personality that would like to sit in their laps and accompany them wherever they went.

It is believed that French Bulldogs are a product of a breeding between smaller sized English Bulldogs and Pugs and Terriers. When the lace makers in Nottingham found better opportunities in France, they moved to the French market along with their dogs.

In France, the smaller Bulldogs thrived and developed into Frenchies of today, but they were actually bred in England. The Americans soon found out about this adorable breed, and their numbers rose gradually when they were taken to the U.S.