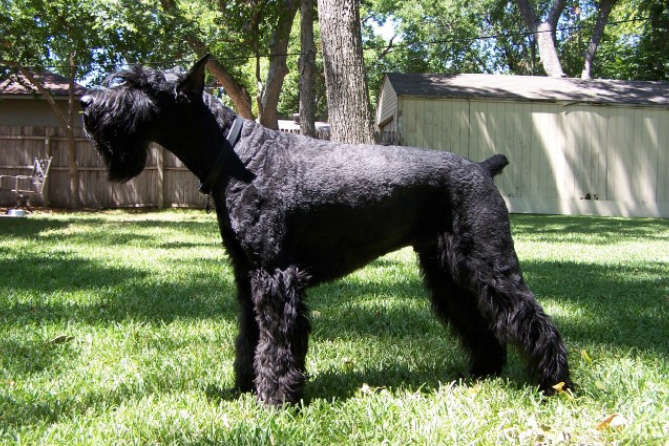 Is Giant Schnauzer Good for Indians?

The Giant Schnauzers have a low to moderate availability in India. These canines hail from Germany and they are highly popular in several European countries. These pooches have a below average tolerance to high temperatures and hot climatic conditions and that seems to be one of the primary reasons why this breed’s demand is not that great in India and in various other countries where the climatic conditions are on the hotter side. These dogs also don't adjust quite well to an apartment life as they prefer open spaces and farms in place of small houses. Thus, the Giant Schnauzers are more suitable for places that have cooler weather conditions and where there is abundant space available so that they can remain sufficiently exercised and active.

The average height of these canines is around 23.5-27.5 inches (at the shoulders). The male Schnauzers are slightly more tall and heavier than their female counterparts. The average weight of the Giant Schnauzers generally lies between 25-43 Kilograms.

The Giant Schnauzers are double coated. They have a soft and short undercoat and a hard, wiry, and dense outer coat. These dogs also possess coarse hair on top of their head and a harsh beard and eyebrows.

The Giant Schnauzers have a strong, substantial and a well-muscled body with great agility and power. Their neck is of moderate length, well arched and blends cleanly into the shoulders. The Chest area is medium in width with well-sprung ribs and the Back region is rather short, strong, straight and firm. Their tail is well feathered and is usually docked to the second or the third joint. The forelegs and hind legs are sturdy, well-boned, strongly muscled, in balance with each other and are known to provide the much-needed stability to the rest of the body.

They have a slightly rectangular, elongated and strong head. Their eyes are medium in size, oval in shape and are mostly found in a dark brown color. The ears are of moderate thickness and are set fairly high on the head.

The upper and lower jaws are well-formed and quite powerful. Their mouth closes in a Scissors bite. And, the overall muzzle is reasonably strong and is well filled under the eyes.

The Giant Schnauzers are extremely loyal and faithful canines that are known for their eager to please nature. These dogs are highly solicitous and considerate of their owners and loved ones and they are also tremendously protective of them. They act as a valiant figure and a wonderful guard dog and can effectively defend and protect their owners in case of any harm or any intruders. But, because these dogs often remain aware and cautious of their surroundings, they don’t easily trust other people and are a little reserved with them. They do not show the same level of warmth and affection to other people or strangers as they show to their family members. These canines are also known to struggle a bit while mixing with other animals such as cats, other dogs et cetera. They are highly territorial in nature and thus they will protect their owners and their property as well in case of any danger or invaders. The temperament traits of the Giant Schnauzers are listed below:

Like several other large-sized breeds, this one is also not meant for everyone. The Giant Schnauzers require a fair amount of training, handling, socialization, and guidance from their owners to be an obedient and felicitous house pet. These canines have high exercising needs and require a bit of an extra effort from their owners to comfortably reside in a particular place. So, its safe to say that these canines are definitely not meant for the novice or first-time dog owners.

The Giant Schnauzers have a well-built, highly muscular body which gives them a redoubtable appearance. And, because of this, these canines are often used as guard dogs and watchdogs. They are extremely strong willed and have a fearless personality and they are known to never back down in case of any external harm or a threat.

Under the influence and supervision of an experienced dog owner, these canines can be immensely proficient and there are no limits to the capabilities of a well-trained Giant Schnauzer. These dogs can excel in numerous dog sports and activities like agility, obedience, carting, tracking, herding and many more. All they need is a firm but gentle guiding hand that can show them the right way and make them a better and probably the best version of themselves.

The Giant Schnauzers can be divided into different types on the basis of the various colors in which their coat is found. These are as follows:

The Giant Schnauzers do quite well on a high-quality dog food, either commercially manufactured or prepared at home. The feeding material given to the Schnauzers should be appropriate for the canine’s age and activity level. The feeding material should be filled with all the essential nutrients and elements that are necessary for the proper development and growth of these large canines.

These dogs need lots of exercise on a daily basis to remain fit and healthy. Long walks in a park, jogging or running sessions with the owners and extensive play time on a regular basis is highly beneficial for these canines. They don’t like to sit idly and are at their happiest when they are working and performing some kind of task or activity.

For an experienced and knowledgeable dog owner/trainer, training these canines should be easy and uncomplicated. They listen to their owners’ commands sincerely and are always eager to please them. These pooches remain highly responsive and attentive while getting trained and they are usually very excited to learn new things and skills from their owners. But it is important to note that their training should begin at an early age as it is not that easy to train an adult Giant Schnauzer. Also, a novice dog owner might find these dogs a bit challenging and difficult while getting trained.

The Giant Schnauzers require a good amount of grooming to look neat and tidy. Their coat should be brushed at least 2-3 times a week to remove loose hair from their body. The coat should also be regularly clipped or stripped and for that, the help of a professional groomer can be taken. Their ears must be checked on a daily basis for any signs of infection and their teeth should be brushed at least once or twice a week.

Coming to their shedding potential, these dogs are moderate shedders and during the shedding season, the frequency of brushing of their coat should be increased.

Health-related problems which are commonly seen in the Giant Schnauzers are as follows:

It is a good idea to take the Giant Schnauzers to a vet’s clinic on a regular basis (at least once every 30-45 days) for normal body check-ups and consultation.

The Giant Schnauzers were probably developed around the 1600s in Germany. They were created primarily to work in fields and to drive cattle. But after a while, they started working in stockyards and butcher shops and some of these dogs also served as watchdogs or guard dogs at several breweries.

These canines are believed to be developed by cross-breeding the Standard Schnauzers with various other large-sized breeds like the rough-haired sheepdogs, the Bouvier des Flandres, and the Great Dane.

The Giant Schnauzers started working as Police dogs in Germany in the early 1900s and they gradually became quite popular in various parts of the world. They were recognized by the AKC in the year 1930 and 32 years later, the Giant Schnauzer Club of America was eventually founded.

Never forget to clean your HTML code and double check your content before publishing the articles!