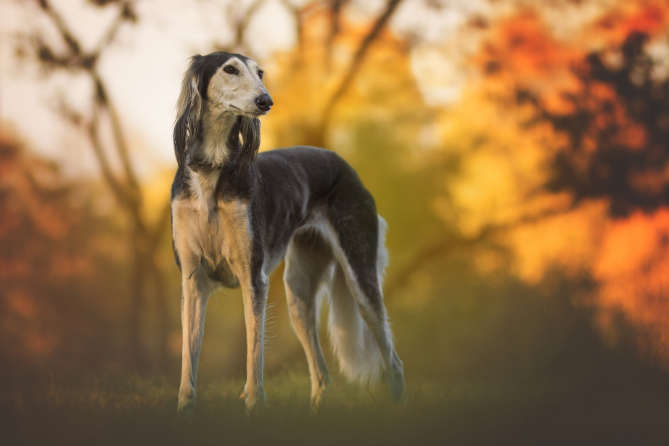 Is Saluki Good for Indians?

The Persian Greyhound or the Saluki is a pretty rare breed to be found in India. They are exclusively available only in big cities and are also limited to reputable and large-scale breeders. But, if we ignore their availability in the country for a minute and only talk about the adaptability of this breed in a country like India, then it is worth noting that these dogs are highly suitable to thrive here, especially if we take their tolerance to high temperatures into the account. This breed hails from the middle-east and was bred under hot and humid environmental conditions and thus they have a natural tendency to efficiently thrive in a hot region. Hence, the Saluki would be a good fit for this country and any potential owner looking for this ancient breed would be happy to have them in their life.

The Saluki is a medium to large sized dog breed which is loaded with endurance and stamina. From its external appearance, this dog displays great dignity and gracefulness but from the inside, it is filled with a significant amount of strength and speed. The official standards of the Saluki are given as follows:

The Persian Greyhounds have a lean and slim-looking body. The average height of a male Saluki lies between 23-28 inches (at the shoulders), while the females are considerably smaller than the males. Also, a Saluki weighs somewhere around 18-30 kg.

The Saluki has a soft and silky coat which is smoothly spread all over the body. The coat is even on the entire body except on the ears, legs, and thighs where medium to heavy feathering is usually found.

They may have a slender body but it is fairly well-built. Their neck is supple and long and the chest is deep and moderately narrow. The back region is quite broad and the tail which is set low on the back is fairly long and well-feathered. The forelegs and hind legs are strong and well-muscled.

They have a narrow head region which is moderately wide between the ears and is overall quite long. Their eyes are large and oval and are mostly present in dark hazel color. The Ears are relatively long, quite feathery and hang close to the skull.

They have a well-made jaw region with strong teeth. The Muzzle is long and slightly tapered.

The Saluki is a very calm and quiet breed that may seem a bit aloof and distant at times but is fairly loving and loyal to its housemates. This breed adjusts well to apartment life as they mostly remain very still and composed and are happy with whatever space they are given. They are also very reserved with strangers and do not trust any unknown person very easily. Training these dogs might be hard for some new or first-time dog owners as they are independent thinkers but under an experienced trainer, their training exercise becomes a lot easier. The general character traits of a Saluki are given in the list form below:

The Saluki is quite a graceful and poised dog breed originating in Egypt, a very long time ago. This breed is so ancient and old that there are some carvings on the Egyptian walls which are believed to date back to 6000 B.C. that display a dog which appears to be just like a Saluki.

Coming back to today’s time, this breed is widely recognized for its beautiful and elegant appearance and its quiet and calm personality. They may not show very often but they love their family members with all their heart. They are also gentle and kind to everyone they know and trust.

Many people easily get fooled by the stylish and exotic looks of this dog and they don’t realize its strength, speed, and stamina. This breed has very high exercise requirements which help them to be in a lean shape. Also, these dogs have a high affinity for energy and thus are quite energetic when they are in the right mood and justifiably likes to spend that energy on some physical task or activity. Hence, all these different attributes of a Saluki should be known and understood by the potential owner so that s/he could make an informed decision.

The Saluki or the Persian Greyhound is divided into various types on the basis of different coats that it can possess. These types are:

And, the different colors that their coats are available in are as follows:

The Saluki is a fussy eater and a bit picky about the feeding material. Hence, initially, their feeding material should be on a trial basis. If it suits them, then it can be continued further, but if they are not willingly eating their food, then it should be changed. A skilled vet’s consultation should go a long way in deciding the perfect food for this regal breed.

These dogs require a substantial amount of exercise on a daily basis to be healthy and fit. Long walks or running sessions in a fenced yard or park is good for them. It is not advised to let them off their leashes as they have a reputation for running away and they do not easily come back when they are being called. They don’t like to sit idly for longer periods of time and can become a little frustrated if they are not receiving the required amount of exercise.

As mentioned, these dogs are a bit tricky to train as they get bored very easily and are also independent thinkers. But, if the owner/trainer is well-experienced and knows how to train and handle such breeds, then the training process can go a lot more smoothly. Also, harsh training methods are not recommended.

The Saluki requires subpar grooming to look elegant and beautiful. The coat on its body needs to be brushed only once a week. Bathing and trimming of nails can be done on an occasional basis. But, if the Saluki is of feathered type, then the frequency of brushing can be increased to about twice a week. Also, these dogs shed in minimal amounts and that too infrequently, hence the shedding potential of the Salukis is on the lower side.

Generally, Salukis are quite healthy dogs and are free from any kind of dangerous genetic diseases. But, they do suffer from some serious problems which they can develop during their life-span. These health issues are as follows:

The Persian Greyhound does not need to be taken to a Vet’s clinic on a frequent basis.

The Saluki is one of the oldest breeds present today in the world. Their pictures and depictions that date back at least 4,000 years are still present inside the ancient Egyptian tombs.

This breed is closely linked to the Afghan Hound because of some similarities in their looks and also because the Afghan Hound is quite an ancient breed in itself. This breed received its name from an Arabian city ‘Saluki’ that was present in the middle-east, but no longer exists now.

These dogs were used by the Egyptian Pharaohs for hunting gazelles. They considered these canines to be sacred and also treated them with high regard. This was the only dog breed that was allowed to sleep in the tents at night and also was honored with various titles like ‘El Hor’ that translates to ‘The Noble’. To this date, the bodies of these dogs are sometimes found mummified besides the bodies of the Pharaohs; this was the level of respect and honor that was given to these dogs.

The Saluki for the first time moved out of middle-east to Great Britain after the first World War. The British Officers returned to their homeland from the middle-east with these dogs and this is how they gradually became very popular on a larger scale.