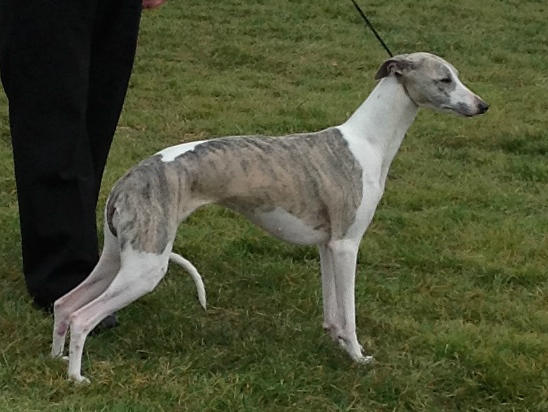 Is Whippet Good for Indians?

The demand for this breed is increasing at a slow but uniform rate in India and it is due to the fact that these dogs are exceptionally well-suited for our country. The Whippets can tolerate high temperatures and hot climate without any problems, and thus they can easily survive in a hot and humid country like India. Also, this breed adapts very well to apartment living and can comfortably reside in small houses and flats which are very common in India. And, lastly, this breed is fairly trouble-free to handle, has low maintenance and grooming requirements and is somewhat easy on the pocket too. Therefore, this European breed can be an extremely good fit for this South Asian country.

The Whippet is a medium-sized dog breed that hails from England, United Kingdom. This breed is known for its sleek and streamlined body which allows it to attain very good speeds. The official standards of a Whippet dog are given as follows:

As these dogs possess a lean and smooth body, their mass and stature are in very proportion with each other. The average height of a Whippet lies between 18-22 inches (at the shoulders) and its weight is around 11-20 kg. There is almost no difference between a male and a female Whippet dog in terms of size.

The Whippets have a smooth and firmly-textured coat which is quite short. Their coat doesn’t shed very often and requires only a little amount of grooming to remain in perfect condition.

They have a well-balanced body with a long and muscular neck which is fairly arched and blends smoothly into the shoulders. Their chest is deep and the back region is firm, broad and well-muscled. The tail is long and tapering and is usually not carried higher than the top of back. The forelegs and hind legs are long, powerful and sturdy.

They have a long and lean head with a keen expression on their face. Their eyes are round to oval in shape, dark brown to nearly black in color and are somewhat large in size. And, the ears are small, fine-textured and folded along the neck.

They possess a strong jaw region with the upper and lower jaw closing in a scissors bite. Their teeth are white and strong and are firmly placed inside the mouth. And, their muzzle is fairly powerful and long without any coarseness.

Whippets may like to run around and accelerate to great speeds but they are also very happy to be a couch potato. These dogs can spend their whole day sitting and resting beside their owner's side. They are very friendly, gentle and affectionate with all their family members and love to be around them as long as possible. They remain quiet and dignified most of the times and are somewhat reserved with strangers. They take their time to know someone new and then after a proper introduction, these dogs can be quite warm and friendly to them also. The Whippets can be a little challenging to train for a novice dog owner as they tend to think independently, but if handled by an experienced owner, the training process can go very smoothly with no hiccups along the way. The general temperamental traits of a Whippet are listed below:

The Whippets might appear to be a smaller version of Greyhounds, but they're a part of a completely separate breed. Still, these dogs do share a peculiar similarity with the greyhounds and that is their speed and agility. They can run at very high speeds (about 56 km/h) and can even give the Greyhounds a run for their money.

The Whippets are also considered a great family pet as they adapt really well to apartment-style living. They are happy to lay in their beds for long periods of time and are extremely gentle and kind to their housemates. They have a soft personality and an adjusting nature which makes them a pretty decent choice for anyone to raise as a pet.

When taken outside the house, these dogs become very excited and they like to play numerous games with their family members. But, as they are very fast runners, it is better to keep them on a leash when not in a fenced area. These dogs can excel at various canine sports like agility, catchball et cetera which is very good for them on a physical and mental level.

There were actually two types of Whippets around the 19th century and these were as follows:

But, the rough-coated Whippets gradually declined in number and are currently not recognized by any major Kennel club.

And, coming to the different colors that their coats can have, the list below represents the various color shades that a Whippet might be available in.

A high-quality diet which is rich in essential proteins and nutrients is best suited for the Whippets. The number of meals should be gradually decreased as they grow up and at the same time the amount of feeding material should be increased.

The Whippets require regular exercise although in moderate amounts. They enjoy long walks and playing sessions with their owners in a park or in an open area. But it is important that you should only let them off their leash if the area is properly fenced as they like to run at very high speeds and it will be very difficult for anyone to catch up to them.

Obedience training at an early age is important for the Whippets so that they grow into a well-mannered companion. And, it is also very crucial for efficiently training them. As an obedient and well-adjusted Whippet will be easier to train as compared to an independent and wayward dog.

Their short coat sheds on an occasional basis and that too in small amounts. They are also quite easy to groom as these dogs only need to be brushed once a week. Bathing and trimming of nails can be done occasionally. But their ears must be cleaned and checked for any signs of infection on a regular basis.

Whippets have relatively few health problems and are generally quite fit and healthy. Some of the common health-related issues found in them are as follows:

The visits to a veterinarian’s clinic are quite rare and infrequent for this breed because of their general good health and fitness.

Unlike many other breeds, the Whippet is a fairly modern and new breed and it only came into existence a couple of centuries ago. This breed is believed to be the result of cross-breeding between the Italian Greyhounds, the English Greyhound, and some other terrier dogs.

In the past, the Whippets were very famous among the lower section of the society in England who used to gamble on these dogs in racing competitions. These canines were exceptional track racers and could run at amazing speeds. Their name was also given to them after getting inspired by their agility and quick movement. The name Whippet is derived from the expression “Whip it” which translates to “to move faster”.

This breed was so popular among the lower class that it was often called “the poor man’s Greyhound”. After displaying their talents in the United Kingdom, these dogs started to move to other countries like Germany, U.S. et cetera and, gradually, they were famous all around the world. And, in the year 1891, they were registered as a distinct breed by the English Kennel Club.