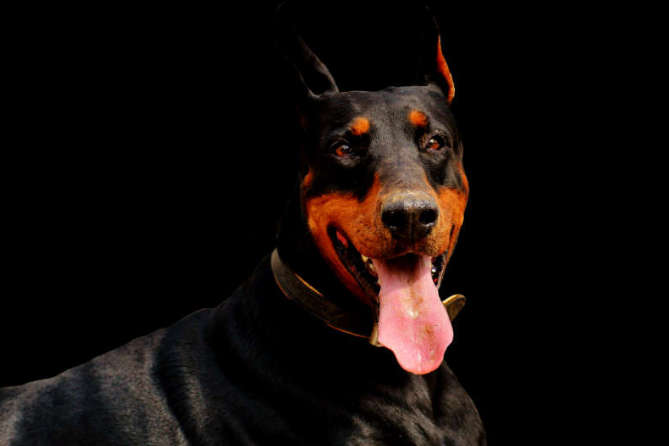 Is Doberman Pinscher Good for Indians?

Doberman Pinscher or simply Doberman is a very loyal and intelligent breed of dogs. They are renowned for their obedience everywhere in the world, and these are the traits that are appreciated by most of the Indian dog owners also. Indians love a dog who is agreeable and obediently listens to them and the Doberman perfectly fits the bill. Their good tolerance towards high temperature and the hot environment is an add-on bonus. They are fairly easy to find in India and their demand remains constant.

Doberman Pinschers are medium-to-large sized canines that are strongly built. Their appearance reflects certain elegance and a noble demeanor. They are a very well-made breed of dogs that remain watchful and alert most of the times. General standards for Doberman are as follows:

Doberman stood tall at an average height of about 24-28 inches. Female Dobies are slightly shorter than the males. Males are also a bit bulkier than the females. Average Doberman has a weight somewhere in the range of 27-45 kg.

Dobermans possess a thick, hard, close-lying coat which is mainly shorter in length. Permissible colors for their coat are solid colors like black, red, fawn with various rust colored markings on different parts of the body like throat, muzzle, above eyes and on all legs.

They have a muscly body with a strong appearance. A broad chest is accompanied by a well-defined forechest. They carry their neck proudly which is well arched and is proportional to head and body in length. Their tail is docked or cropped close to the second joint which appears to be an elongation of the spine. They have well-balanced front and hind legs.

Their head is slightly longer compared to some other breeds and is very robust looking. They have almond shaped medium to dark brown eyes that carry vigorous expression in them. Their ears are mostly cropped and remain erect.

Their jaws are very powerful with strong teeth that are 42 in total. Their muzzle is also quite long and slender.

Dobermans are famous for their loyalty and obedience. They have a fearless attitude and courageous personality and remains alert and aware of their surroundings. They are quite clever and bright as well and wants to learn various new skills from their trainers. They are very friendly and affectionate with the ones they love and trust like family members, but they remain a bit conscious around strangers. Various behavioral characteristics of Dobermans are as follows:

Widely respected for their numerous positive traits, Doberman Pinscher is an excellent working dog as well as an awesome pet. They are known to be very intelligent and fearless and a spectacular watchdog. They possess an undying loyalty for their owners and are extremely devoted to them.

Doberman has overtaken various other breeds like Rotties and German Shepherds as a better guard dog. They are always on their toes and protective of their family. This is the reason that they do not mix quite well with the strangers. They remain a bit reserved and do not trust an outsider that easily.

And, because of their extreme affection for their owners and family members, they are also not the type of breed that can be left alone for a longer period of times. Apart from strangers, they are also not very friendly with other dogs. They feel a bit challenged by them and thus are not quite warm to them.

One more important thing about Dobies which is very crucial for dog owners is their attitude towards training. They are one of the most exciting dogs to train as they love to learn new and different things. They get very excited while getting trained and have an overall positive outlook for training. Although they are quite smart and grasps new things fairly easily, they are easier to train for an experienced trainer rather than a novice one.

There are two types of Dobermans present which are divided on the basis of slight differences in their working ability, temperament et cetera. These two types are:

Dobermans are mostly found in darker color shades like Black, Red, Fawn and rarely Blue. But, they also have rust colored marking in various different places on their body. So, possible color combinations for Doberman’s coat are:

Doberman is generally a healthy breed and they stay that way by means of proper diet, exercise, and care. Like any other breed, they require sufficient amount of good quality food to fulfill their dietary needs. Feeding material can be home cooked or purchased from a shop as long as it suits the dog and provides it with the required nutrients.

The second most important aspect after quality food for keeping your Doberman’s health intact is providing proper exercise. Doberman is an athletic breed who loves to have long walks and running period. They are always in the mood for outside time and loves to perform various physical tasks like fetching. And, to keep your Doberman fit and fine, ample amount of exercise is necessary.

As mentioned earlier, they are always ready to learn different skills from their trainers. They are eager to please anyone who trains them. They are a very capable, intelligent and disciplined breed of dogs. But, if proper training is not given to them and that so at an early age, then they can become a bit unmanageable and brash. Hence, it is the responsibility of every existing owner or potential owner to train their Doberman with dedication so that they grow to become the obedient dogs that they are famous for.

They require a minimal amount of grooming to remain in optimal condition. Occasional bathing and brushing of hair (twice a month) is more than enough to keep the Dobie neat and sharp. But brushing with a soft bristled brush on a regular basis is necessary during the shedding period which lasts for quite some time.

Like most of the breeds, Dobermans are also prone to quite a few diseases which might be harmful to their overall health. These diseases are:

Dobermans are rarely in need of a Veterinarian because of their overall solid built. But any signs of a potential disease or health issue should be consulted with the Vet.

Compared to numerous other breeds, Doberman Pinscher is a relatively new breed. It is believed they were bred in Germany around the year 1890. There was a German tax collector named Herr Karl Friedrich Louis Dobermann who used to visit various places that were not so safe to collect taxes and there was a great chance of being attacked by bandits and thieves.

Louis wanted a dog or a companion to provide him with the safety and guarding that he so desperately needed. He carried out breeding between numerous breeds of dog namely Manchester Terrier, Great Dane, Old German Shepherd, Rottweilers, German Pinschers, Weimaraner, and the Greyhound. And, the result of this breeding process was the Doberman Pinschers that we know today.

Doberman Pinschers came into existence because of the efforts of one man and that is why they were named after him. After the demise of Louis-the tax collector, the Germans continued with the breeding of this dog. And in the year 1900, this breed was recognized as an official one by the German Kennel Club.

After their recognition and their efforts during the World War I, their importance with the military rose and they also became quite popular among the high-class people who were looking for a guard/security dog to safeguard their homes.