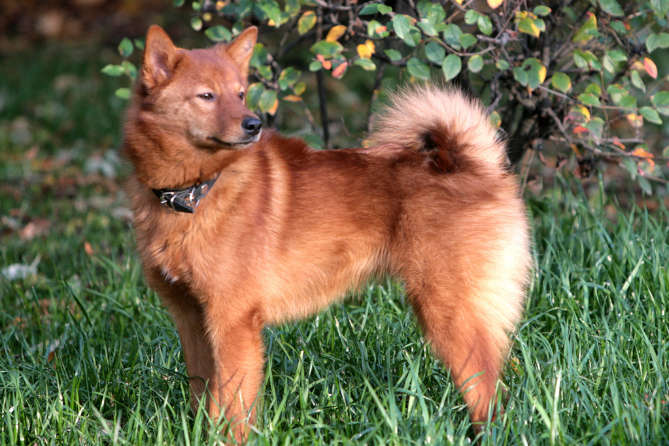 Is Finnish Spitz Good for Indians?

Finnish Spitz is middle-of-the-road in terms of popularity and demand in the Indian households. They have an average tolerance to high temperatures and thus are not extremely affected by the Indian climate if proper care is provided by the owner. But, their tolerance to cold is on another level as they can survive in very harsh and cold climates without any difficulty. They are known to be originated in Finland where temperatures can go as low as -7°C, and thus, they have adjusted and adapted to that kind of weather very well. But, if someone in India is looking for a Finnish Spitz to raise, then they need to be a little bit careful especially during the hotter period of the year. During this time, less amount of exercise, more time spent inside the house preferably in an air-conditioned room, more water to keep the pooch hydrated, all these precautionary measures are recommended to avoid any harmful effects of extremely hot weather on the Spitz’s health.

Finnish Spitz has a fox-like appearance with symmetrical and well-balanced body. Various parts of their body like the muzzle, ears, coat, and tail; all points to their northern origin. They appear to be quite lively which also reflects in their eyes and is evident by their mostly erect ears. General breed standards for the Finnish Spitz are given below:

Finnish Spitz is a medium sized breed of dogs. Their average weight is somewhere between 9-15 kilograms. And, the average height is between 15.5-20 inches. Males are both taller and heavier than the female Spitz.

They are double coated. They have a dense and soft textured undercoat which is on the shorter side in terms of length. On the other hand, the outer coat is harsh, straight and long with strands of hair measuring up to 2 inches. Also, the males possess a slightly heavier and denser coat than the females. Their coat is mostly found in red color tones and is very vibrant and attractive to look at.

They have a muscly body with a deep chest region and well-sprung ribs. These barking bird dogs, as they were famously called, also have a distinct looking plumed tail which forms a curl. Their forelegs are strong and have a well-defined bone structure and the hind legs are in perfect balance and synchronization with the forelegs.

As mentioned, they have a fox-like face with almond-shaped eyes which have a lively expression in them and are dark in color. Their ears are pointy and set higher and are mostly in the alert position.

Their jaws are compact and robust with their muzzle being quite narrow and tapered.

Finkies normally remain fairly happy and comfortable when they are with their family members or the ones they love and trust. They are very warm and affectionate towards all of their loved ones and are always in the mood to spend time with them. They take their time to get to know someone and are not always very friendly with the strangers at first. But, once a sense of trust is developed between the Spitz and any person, then they can be very affable with them. Key temperamental traits of the Finnish Spitz are as follow:

Finkies are distinct looking fox-like dogs that originated in Finland. Back in the day, they were used for hunting purposes and they used to chase after small birds and game.

They incorporated all the traits that point towards their northern heritage; erect ears, narrow and tapered muzzle, dense coat and a plumed and curled up tail. Their heavy coat helps them survive in very difficult and cold climatic conditions. They are always very attentive and alert and their whole body reflects that trait.

Finkies are also fairly intelligent and are independent thinkers and thus can be a bit stubborn under an inexperienced owner. They need to be handled firmly from the beginning and once they start trusting and respecting their owners, they can be very agreeable and loyal to them.

They were known as the Barking Bird Dogs as they are quite vocal and are always looking to display their barking prowess. They are also not very comfortable with an unknown canine or a person but after a while of getting to know one another, they can become the best of friends.

Finnish Spitz is divided into different types on the basis of the color of its coat. These colors are:

Finnish Spitzes do well on a high-quality dry food given in small amounts at regular intervals. It is important to note that they have an extremely efficient metabolism, which means overfeeding them should be strictly avoided as that could lead to obesity.

They are not the kind of dogs who like to sit idle and inactive. They were raised to hunt all day long and thus they require a heavy amount of exercise to spend their abundant energy and also to be in a good shape. Long walks on a daily basis preferably with them on a leash, a good amount of play time and some other fun physical activities should suffice their exercise needs.

As mentioned, they like to think independently and thus are not that easy to train. They can become a bit distracted while getting trained and thus training sessions must be kept short and sweet, a trainer should try to make his/her training methods more fun and interesting so that they do not lose their doggy’s attention. Positive reinforcement with treats can also be used to teach your Finkie some new things.

They require an average amount of grooming. Brushing the coat once or twice a week with pin brush should be adequate. Occasional baths and brushing of teeth are also required to be done whenever they are necessary.

Also, Finkies shed at least twice a year very heavily, during that period, daily brushing of the coat and a bath can speed up the process.

They are fairly healthy if purchased from a good breeder but still can sometimes suffer from numerous health issues. These health problems are:

Visits to a veterinarian’s clinic are not that frequent as they generally remain healthy and fine.

Finnish Spitz dogs are believed to be the result of selective breeding of Spitz-type dogs. When a group of tribal people known as the Finno-Ugrian tribes wanted a dog that would help them in their search for food, they started breeding the dogs that lived around the central Russian region.

After the successful breeding, the tribal people started using their dogs for hunting purposes. They were mostly used to hunt small birds and game. The dog had the role to alert the hunters with their distinctive bark about the position of the prey.

After the advancement and development in the field of transportation, there was a huge influx of new people and new breeds of dog in the Finnish region. By 1880, Finkies started mating with other breeds and thus gradually became almost extinct as a true and distinct breed. But thanks to the efforts of a Finnish Sportsman named Hugo Roos who realized the value of a true Finnish Spitz, this breed saw a revival.

Hugo Roos decided to breed two genuine Finnish Spitz, which resulted in a true Finnish Spitz progeny, and thus as time passed by, their numbers started growing and after almost thirty years of cautious breeding, the modern-day Finnish Spitz that is known to us now was born.

This breed is highly popular in the Scandinavian countries and it is also considered to be the National dog of Finland. Finnish Spitz was recognized as an official breed by the AKC in the year 1988.