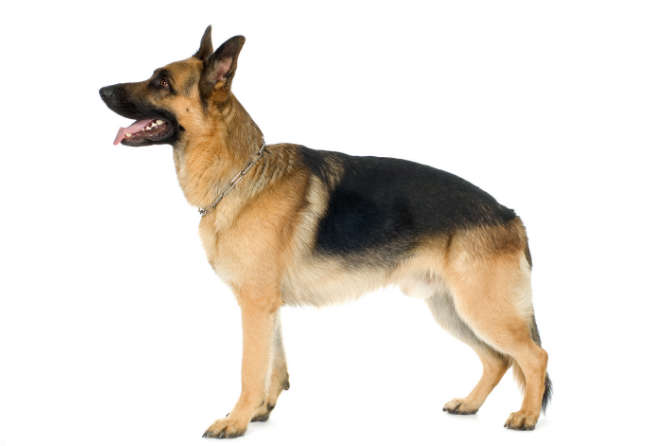 Finding a German Shepherd in India is nothing to worry about. They are hugely popular among the dog lovers and are fairly easily available. Also, bringing a German Shepherd home is also very pocket-friendly as compared to various other breeds. They also have a decent tolerance to heat and high temperatures and thus are reasonably suitable for the Indian weather conditions. They are a very good choice for anybody looking specifically for a guard dog. They require a good amount of training and exercise from the owners/trainers and thus are not a recommended breed for anyone who is looking for an easy-going dog.

German Shepherd is a strong, athletic and well-balanced dog with a sturdy overall built. It has good muscular physique and always stays alert and aware. Various breed standards are given below:

German Shepherds are double coated with dense and straight hair which is of medium length. There are short patches of hair on the foreface, head and inner ear and the hair grows longer in the neck region. Legs are also with long strands of hair.

They are solidly built with an all-around balanced body. The chest region is deep and roomy providing ample space for various sensitive organs. They have a somewhat longer and muscular neck without the presence of any loose skin. Both the forequarters and the hindquarters are brawny and longer in length.

Their head is in proportion to their body, is strong and always held high. They have almond shaped medium sized eyes with dark colours. They always have a composed and keen expression on their face.

Their jaws are firm and strong with 42 teeth in total (20 upper and 22 lower). The muzzle is also well built and quite sturdy.

German Shepherds are mostly regarded as very loyal and intelligent breed of dogs. They always remain alert and keen and are considered a great guard dog. They are easy to train and can learn new things quite easily because they are very compliant in nature and are equally smart as well. Chief temperamental traits of German Shepherds are:

The place of origin of the German Shepherd is obvious from the name alone. They emanate from Germany and were named by a breeder known as Captain Max von Stephanitz. They were primarily used for herding purposes.

In today's time, they are famous for their protective nature and guarding abilities. German shepherds are very trainable dogs. They are highly energetic and athletic and loves to listen to their trainer’s commands. They are extremely loyal and have a caring nature towards their owners. They have high intensity and vigour which helps them when they are used for security purposes.

They are also very good at being an ideal house pet. They are incredibly friendly towards anyone who they can trust, they are careful with small kids, they are extremely obedient and disciplined when trained properly and they also possess great watchdog ability. The only thing to care about is their attitude towards other canines. They are not very warm towards other dogs and they must be trained and controlled accordingly. But a firm trainer can effectively control them through specific obedience training starting from an early age.

There are different German Shepherds that can be used for different jobs and tasks. And, based on their various roles, they are divided into different types like:

These German Shepherds have different roles and functions compared to one another and are also somewhat trained and raised differently.

Speaking about various colours in which a German Shepherd is found, they are mostly present in dark colour tones like Black or a combination of Black with some other colours like:

They are also found in other colours like grey, sable, liver, light blue and some more. But, apart from sable, all these other colours are quite rare.

For maintaining their robust built, they require a good quality diet which should be rich in vitamins, proteins and minerals. Feeding eggs, vegetables and other nutritious items are helpful in keeping them healthy. In between the feeding periods, they can be treated with some smaller treats like biscuits or kibble in a limited amount.

German Shepherds loves to use their energy in various constructive physical tasks like herding, tracking et cetera. If that is not possible for the trainer, then regular walks and even running in an open field is advisable for keeping the German Shepherd in shape and happy. Irregular exercise schedule or lack of physical activities can make a German Shepherd frustrated and annoyed.

German Shepherds are always eager to please their trainers and they love to get trained. Obedience training at an early age is a must and it will help in making them extra well-behaved and adaptable. They are also highly intelligent and smart and thus their learning process is a lot faster and smoother than many other breeds.

Grooming needs of a German Shepherd are fairly moderate. They require weekly brushing of their coat to remove the loose hairs. Also, their bathing and cleaning needs are quite rare. But, their shedding potential is very high. They shed a lot on a regular basis, hence special care and attention must be given to that. Frequent brushing during the shedding phase can help in controlling the amount of hair shed.

German Shepherds are considered to be a fairly healthy breed of dogs. But like every other breed, they do suffer from various issues which are harmful to their health and body. Common health problems found in German Shepherds are:

It is advisable that every German Shepherd owner must pay a visit to a skilled Vet on a regular basis even if the doggy is in fine shape. Owners should consult and discuss their dog’s diet, behaviour, energy level et cetera with the Veterinarian. It is highly beneficial in the long run and can keep the German Shepherd’s health intact.

The beginning of the story of German Shepherds dates back to 1890s. At this time, a German cavalry officer was in search of a dog breed that was best suited for working purposes. He had very strong opinions that any dog should be bred only for its working abilities. His name was Captain Max Von Stephanitz.

Stephanitz while visiting a dog show in 1899 saw a wolfish like dog named Hector that he immediately loved. He brought the dog with him and renamed him Horand Var Grafrath. He started mating Horand with numerous dogs and gradually he was successful in creating a vast group/society now known as German Shepherds.

Max Von had relations and connections with the military and government. He insisted them to use German Shepherds for their purposes. During World War I, German Shepherds proved to be of great use. They were used as Red Cross Dogs, guard dogs, rescue dogs, messenger dogs and more.

Through the tenacious efforts of Stephanitz, there were around 57 thousand German Shepherds by the year 1923. Their bravery and loyalty were adored by everyone and thus they were taken to various different countries which helped them flourish even more. Its been more than a century, yet German Shepherds have remained to be equally loyal and protective in nature just like their ancestors.