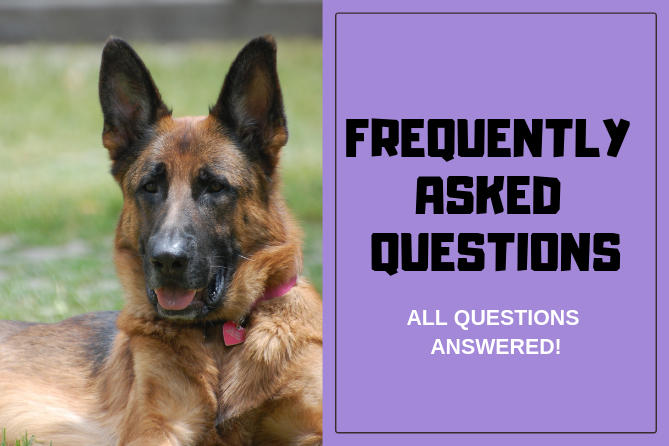 Answer: No! German Shepherds cannot be hypoallergenic canines because they shed their fur quite heavily all around the year.

Answer: Yes! German Shepherd is a very suitable breed for kids. These canines are very kind and friendly with small kids and are known to be immensely easy-going and tolerant of children’s behavior.

Answer: This also depends on whether a German Shepherd has been trained or taught by their owners to peacefully co-exist with other animals such as cats. If a GSD has received proper training from its owner, then he should have no problem in mixing and getting along with a cat and thus can be fairly friendly and amiable with it.

Answer: Yes! German Shepherds are famous for their guarding abilities and the protective instincts that they possess for their loved ones. These canines make excellent guard dogs to the families and are always there to protect and defend them against any kind of danger or harm or potential threat. And, apart from being awesome guard dogs, they are also known to make amazing watchdogs as well.

Answer: Yes, but only if they remain sufficiently exercised. German Shepherds are very energetic dogs and they do require a lot of exercise on a regular basis, hence they will only fit well in an apartment if they are receiving the necessary amount of exercise. Without it, they can easily become very frustrated and demotivated. The apartments or houses that are near to a park or a garden are best suited for the GSDs as they can easily receive their daily exercise quota at those places.

Answer: A lot! German Shepherds are known to shed their fur constantly all around the year and that too in an abundant fashion. The frequency and amount of shedding can be further increased during the shedding season which usually comes at least twice a year. It is extremely important for the owner to brush the coat of his pooch during this period as it helps in somewhat limiting the shedding process.

Answer: As German Shepherds require a fair amount of training, socialization, guidance, and handling from their owners, they are not considered to be a great option for those people who have no prior experience in dog parenting. These canines also have high exercise needs and decent grooming needs and that is why a novice or first-time dog owner might feel a bit overwhelmed with all the responsibilities that come along with owning and raising a canine.

Answer: No! German Shepherds do not like to use their voice without any reason. They only bark or howl whenever they want to express themselves or when they need something from their owners or loved ones. They do bark a lot when they are guarding their property or if they have detected the presence of someone untrustworthy.

Answer: German Shepherds are very active and athletic canines who require a good amount of exercise on a daily basis to be fully healthy, fit and satisfied. These dogs should be taken to daily walks or running sessions for at least 30 minutes as regular exercise and movement are extremely crucial for these canines. They also enjoy playing various games with their loved ones either inside the house or outside, but wherever it is, it should result in a good amount of movement and exertion for these dogs.

Answer: German Shepherds do not appreciate being left alone in the house for long periods of time. After a few hours of being alone, they can easily become very bored and irritated which can eventually lead to a destructive behavior such as barking, digging and chewing random stuff lying in the house. If you are planning to leave your GSD alone for more than a few hours, then this breed might not be highly suitable for you.

Answer: For an experienced dog owner, it is a treat to train this amazing canine. German Shepherds are very quick learners who are always eager to please their owners with their skills and intelligence. These dogs can be taught a lot of different commands and tricks and if taught in a correct and interesting manner, chances are they will learn a new trick in one training session only. They happily listen to their owner’s commands and are known to always obey them. But it is important to start their obedience training from a very young age as that will make their training sessions a lot smoother and unchallenging when they grow up.

Answer: German Shepherds have a dense and straight double coat that requires a moderate amount of grooming to remain neat and clean. Their coat should be brushed at least once or twice every week to remove extra loose hair from their body. The frequency of brushing should be increased during the shedding season. They only need occasional baths to remain dirt free. Their nails should be trimmed on a regular basis and their teeth can be brushed once every 10 days.

Answer: German Shepherd can reside quite comfortably in moderately hot and humid places. Their tolerance to high temperature is decent and thus, as long as the temperature around them is not extremely high, they should have no problem in thriving in hot areas and places.

Answer: Great! German Shepherds are known to have an awesome tolerance to cold and low temperatures. These canines are happy to live in snowy and chilly places as their dense double coat protects them under harsh climatic conditions.

Answer: Yes! German Shepherds are highly intelligent canines who have awesome learning and decision-making abilities. These pooches are considered to be the third most intelligent canine breed out of more than 200 breeds and only the Poodles and Border Collies are placed higher than them.

Answer: Due to their immensely protective behavior for their loved ones, German Shepherds are not that friendly with the strangers and new people. These dogs remain fairly reserved with strangers as they do not trust a new person very easily and thus are not that cordial with them. But this can be easily improved by socializing the German Shepherd with a lot of people when they are at the puppy stage.

Answer: No! German Shepherds are not known to drool excessively. They only salivate when they are about to eat their meal or they want something to eat from their owners.

Answer: Compared to many other breeds, German Shepherds are still very fairly priced canines that many people can afford to properly maintain and raise. These dogs do require a good amount of work and effort from their owners and their high exercising needs, training and guidance requirements and high nutritional requirements mean they do require a fair amount of maintenance and handling from their owners. But this is the same case with most other breeds out there and thus these canines cannot be called as high maintenance.

Answer: Yes! GSDs are extremely popular in India and thus their demand is also very high in this country. Hence, breeders are making sure that they are able to provide this popular breed to anyone who desires to raise it and because of that, these canines have remained fairly easily available in India.

Answer: Some GSDs do like to swim a lot, but others might not be that elated to swim in a big pool. Those who like to swim can be taken to beaches or lakes and can be trained to swim in deep waters, but those who do not like it, should not be forced to do something they are not happy to.

Answer: German Shepherds are mostly found in the following colors ( and combinations):

Answer: German Shepherds have a fairly average life-span of about 10-13 years. They might be able to live longer than 13 years if they are provided with all the important things to sustain a healthy life like high-quality nutritious feeding material, regular exercise and movement, proper vaccinations, and necessary care and attention from the owners.

Answer: The most common health problems that are faced by a German Shepherd during its lifetime are digestive problems, blood disorders, elbow and hip dysplasia, epilepsy, keratitis, chronic eczema, and bloat.