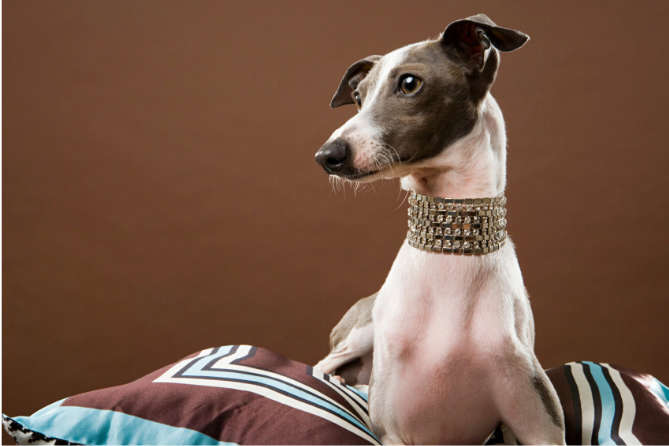 Is Greyhound Good for Indians?

Greyhounds are not that easily available in India. At least, if purchasing from a trusted and reputed breeder, Greyhounds are not that common. There might be a few reasons for that; they are not extremely popular all around the world and they are a bit expensive to both, purchase and maintain. But if a dog lover wants to own a Greyhound, it might be a good option because unlike many breeds that are intolerant towards harsh Indian climatic conditions, Greyhounds have a very good resistance to high temperature. They can easily thrive in hot and humid conditions which are very common in a country like India. Excessive heat has no major impact on the overall health of a Greyhound, hence neglecting the expenses that come with a Greyhound which are a little higher than average, they are the good and sturdy choice for an Indian dog lover who is looking for a strong and robust dog.

Greyhounds are well-built dogs with a long and muscular body. They are more on the leaner side rather than bulky. They are very agile and their well made scraggy body helps them to run at great speeds. General breed standards for Greyhounds are as given below:

Greyhounds possess a good proportion of height and weight. They are quite tall with an average height ranging from 27-30 inches. And, they are decently weighted with respect to their stature, lying somewhere between 27 to 36 kg.

They have a smooth coat which is short in length and is firm texture-wise. Their coat can have a bunch of different colors and can have both lighter and darker shades.

As stated, Greyhounds is a well-built breed with a long, slightly arched neck which widens going towards the shoulders. They have a deep chest region with well-sprung ribs. Back region is muscular and broad which makes them sturdy. Forelegs and hind legs are long, powerful and well-balanced.

Greyhounds have a distinctly narrow head which is on the longer side and is decently wide between the ears. Coming to ears, they are small in size and have fine texture on them and are mostly folded. They have medium sized eyes which are mostly dark in color.

They have strong and powerful jaws with even and firm teeth placed inside their mouth. Their muzzle length is good when compared to their head.

Greyhounds are generally considered to be even-tempered with a calm nature. They might appear big and mighty in size but have a mellow disposition. They remain quiet and have a low tendency to bark or howl. They are very athletic and agile and are quite fond of running at cracking speeds for a longer duration of time. Various temperamental traits of Greyhound are listed below:

Greyhounds are large sized dogs with a lean and athletic built. They are noble, gentle and sweet canine partners with a lively attitude. They are very affectionate with almost everyone and enjoys their company.

Because of their long legs, sporty appearance and their ability to achieve very high speeds while running, they are commonly used in races. They love to spend their energy and time sprinting at a good pace in a park or an open field. They are not meant for anyone who is unable to invest a substantial amount of time in fulfilling their exercise needs. Hence, anyone looking to raise a Greyhound should be aware of all their characteristics, needs, and traits and then make an informed decision.

General pros and cons of a Greyhound are listed below, which might be helpful for a potential dog owner contemplating to purchase/adopt this majestic dog.

They are not officially categorized into various types, but generally speaking, Greyhounds are divided into two types based on the slight size difference between both of them. These types are:

Coming to various colors a Greyhound can have, they are present in numerous different colors ranging from light to dark shades. These colors are:

Greyhound being an athletic and large sized dog have preferential dietary requirements. They are more likely to grow and develop at a faster rate if given a high-quality diet rich in proteins and vitamins. They require a higher amount of calorie for proper development than some other breeds.

Greyhounds have decent to high exercise requirements. They are known as Ferrari or Cheetah of the doggy world as they are very fast runners. They are keen to use their energy for running purposes and loves to spend time outside of the house. They are not very unhappy to stay inside but always prefers to run in a garden than to lie on a couch.

Training a Greyhound requires time and skill. They should start experiencing training from their trainers from an early age. They love to think independently and are easily distracted, hence training them is not that easy as it may seem. A trainer should be persistent while making the Greyhound learn and listen to his/her commands. Training with passion, care, and a gentle attitude can help the process become faster and easier.

They have very little grooming needs primarily because of their short and dense coat. Bi-weekly brushing and monthly bathing are enough for Greyhounds. Nails, on the other hand, should be trimmed on a regular basis as long nails can be a source of discomfort for the doggy. They also are occasional shedders and brushing of the coat with a soft brush can help in removing the loose hair.

Greyhounds are usually a very fit and healthy breed of dogs. They are less likely to suffer from a serious health issue if properly cared for, but still, some health problems are commonly seen in a Greyhound. They are as follows:

Because of their general good health and a lean and fit body, they are less likely to visit a veterinarian than some other breeds. Only in case of any prolonged health problem, they require regular assistance of a vet.

Greyhound is quite an ancient breed and their ancestors are supposed to be originated in the middle east. There are numerous proofs of ancestors of Greyhounds being depicted in Egyptian arts and pictures. Their true origin is not known to anyone and people started theorizing about their existence and beginnings.

Greyhounds of today are believed to be originated and developed in England. They were highly appreciated for their hunting skills and speed throughout the European region. They were also used in various sporting events like racing and coursing. Also, they were very popular and in high demand because of their game chasing prowess.

There were finally recognized as an official breed in the year 1885. A year later, an official coursing race event was organized featuring several athletic Greyhounds. This practice is still followed in some parts of the world but it has become quite contentious because of the treatment that the Greyhounds have received when they underperform on the racetrack.