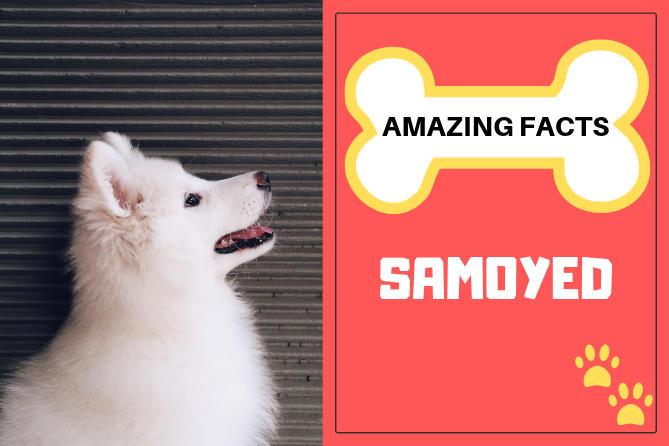 INTERESTING AND FUN FACTS ABOUT SAMOYED

Here are some fun and fascinating facts about the Samoyeds that will surely surprise a lot of people!

It is believed that in the past when the Samoyedic people were living in very harsh and cold climatic conditions in Siberia, they were often struggling to find proper food and nourishment for their survival. And, to help them out during the hunting and food gathering process and also to haul their loads, they required a sturdy and loyal companion. And thus, they started a breeding program and that resulted in the formation of these Samoyed canines. And, because they were bred by these Samoyedic people, hence, these pooches were also named after them.

While some people believe that the correct way to pronounce the name of this breed is Sa-Moy-ed, there are others who think that the actual pronunciation of this breed’s name is Sammy-ed. Generally speaking, both are considered to be correct.

Samoyeds are double-coated canines who have a short, soft and woolly undercoat and a long and harsh exterior coat and usually the most talked about thing of this breed is its stunning coat itself. But their nice-looking coats come at a high price and that is heavy grooming requirements and shedding. These dogs are known to shed their fur on a regular basis and if you collect their extra loose fur during the shedding season, you can actually make a few clothing items from it. Also, to keep their coat neat and tidy, regular brushing, cleaning and sweeping of coat are absolutely necessary.

Because their lips naturally curve in the upward direction, it seems like these dogs are smiling or grinning most of the times. And, due to this, they have received the nickname of Smiley dogs and their grinning expression is called as the “Sammy Smile.”

Samoyeds are known to be odorless in nature and that means their body doesn’t produce as much smell as some other breeds do and hence, they are considered to be stink-free canines. And, because of that, they don’t require a lot of baths or washing of their fur and bathing them only once every 30-60 days will be more than enough for them.

After these canines came into existence, they were able to prove to their worth to the Samoyedic people by becoming a loyal companion and a great worker to them. These pooches helped the tribal people to hunt down various animals and to gather their foods, they pulled their owners’ loads and sledges, and they also helped in herding the reindeer. And, gradually, the Samoyedic people also began to appreciate the skills and efforts of these canines and they decided to make these pooches a part of their family.

By the end of the 19th century, several explorers began to use Samoyeds on their trips to the north and south pole. They opted for this breed on their expeditions because of their durability, stamina, and strength. The main tasks for these dogs were to pull the sledges of their owners and to provide warmth to the explorers with their fluffy and long coats.

After the explorers discovered them, these canines were starting to get imported to other parts of the world. They moved to England in the late 19th century, and there they attracted the Queen consort of the United Kingdom, Alexandra of Denmark. Queen Alexandra became a huge fan and an ardent admirer of this breed and she started breeding them in the royal kennel.

Samoyed canines were able to form a very strong bond when they first came into existence with the nomadic people who bred them. And, because of that, these canines have developed a pack mentality and a sense of closeness to their owners and loved ones. And, that is why these cute-looking canines are always ready to spend all of their time with their close ones. They crave the company of their housemates and if they are left alone in the house for long periods of time, then they can become sad, demotivated and eventually a bit destructive in nature.

Samoyeds always remain extremely careful and alert whenever they are around a young child. They love to play a lot of games with small kids and are always known to be tremendously kind and gentle with a small child. They are great with infants and newborn babies as well.

As this is a Spitz-type breed, it means they’re fairly closely related to the Wolves just like all the other Spitz breeds. This includes Chow Chow, German and Finnish Spitz, Husky, Shiba Inu, Alaskan Malamute et cetera.

Samoyeds are known to express themselves by means of barking or howling. And, when these canines howl, it sounds a lot like singing which is extremely amusing and enjoyable for the Sammy owners.