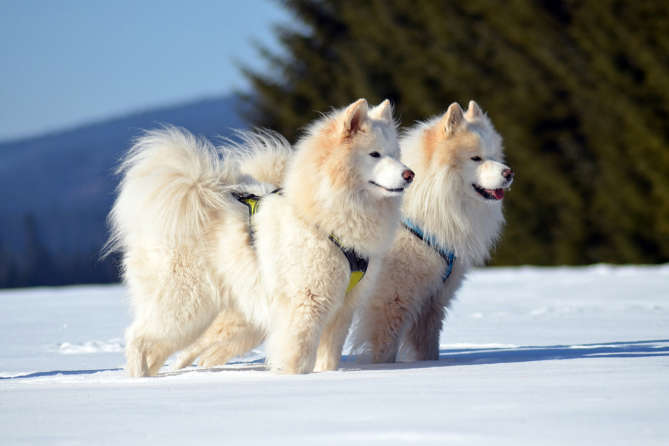 Is Samoyed Good for Indians?

The Samoyed is a breed that was bred in harsh and cold conditions in Russia and thus, they have an excellent tolerance towards low temperatures. They can easily survive in places where the temperature can go as low as below 0°C. But, as good as their resistance to a colder climate is, they are equally unfavorable and uncomfortable in the regions with hot climatic conditions. Hence, they are not at all a good fit for a country like India. But if some passionate dog admirer still wants to raise a Samoyed in this country, then he/she need to be a lot careful and must protect this pooch by keeping it away from the excessive heat of the sun especially in the summer season. They should be thoroughly hydrated and preferably kept in an air-conditioned room. Only after a considerable amount of care and attention from their owners, this breed can thrive in a hot and humid country like India.

The Samoyed is a working-type dog who is adored by most people all around the world for its beauty and furry looks. They represent a sense of alertness, dignity, and gracefulness by their appearance. Official standards of the Samoyed are given as follows:

The Samoyed is a medium-sized athletic dog; hence, it weighs moderately and also has a reasonable height. On average, the Samoyed stands tall at a height of about 19-23.5 inches (at the shoulder), and it weighs somewhere around 16-30 kg. The males are a bit larger in size than the females.

The Samoyed was bred in very cold climatic conditions; therefore, its coat is quite heavy and weather-resistant to provide protection against harsh and rough conditions. In the case of a Samoyed, the quality of the coat is more important than the quantity. Their coat is generally available in light color tones like White and Cream.

They have an overall durable body which possesses a good amount of strength and agility. The neck region is well-muscled and strong and they carry it with pride and dignity. Their chest area is deep with well-sprung ribs and the back region is straight, muscular and medium in length. Their tail is moderately long and is profusely covered with long hair. The forelegs and hind legs are strongly built and provide the required stability to the rest of the body.

They have a broad and wedge-shaped head which is slightly crowned. Their eyes are almond shaped, deep set, placed well apart and are mostly in dark color shades. The ears are thick, strong and erect and are triangular in shape with slightly rounded tips.

They have a reasonably strong jaw region with well-set teeth closing in a scissors bite. The muzzle is medium in both length and width and is tapered toward the nose.

Samoyed or Sammy is a fairly friendly and affectionate dog who loves to socialize and meet new people. Sammies are very lively and energetic canines who can easily lift up anyone’s spirit by their loving behavior and cuddly appearance. They also are very playful and loves to spend time with their owners outside the house playing some games. They are generally very warm with everybody but also remains alert and aware of their surroundings. Some people may find them a bit stubborn while training them, but it can be easily rectified by changing the approach and making the bond between them and the doggy a bit stronger. General temperamental traits of the Samoyed are listed below:

The Samoyed represents a perfect balance of strength and gracefulness in the canines. They are not only beautiful to look at but they are extremely durable especially in low-temperature weather conditions mainly because of their thick coat which is impervious to cold.

Also known as, the smiling sled dogs, these canines were bred to work in very harsh conditions and that is why they have developed into such a sturdy and functional breed. They are very soft and loving towards their family members and are also very gentle and careful with small kids. They also are fairly decent watchdogs as they mostly remain alert and observant.

Sammies are quite energetic as well and thus loves to spend their energy on some physical task and activity. If they are not regularly exercised, they may become bored, restless and even frustrated. They also sometimes think independently and may act stubborn and mischievously. Hence, anyone looking for a Sammy to raise as a pet should have had some kind of experience in handling and controlling a pooch.

The Samoyed is categorized into different types on the basis of the colors that its coat can possess. Its coat is mostly available in lighter color shades which are as follows:

There are some cases in which a Samoyed was found to be in a pure black coat, but these cases are very few and far between, and thus are not given that much importance and attention.

A Samoyed does well on a good quality diet which is rich in nutrients and other essential elements required by the body to be fit and fine. Feeding material can be chosen as per the advice of a vet. Treats are also allowed but should be given in limited amounts.

They need regular exercise in decent amounts to be in perfect shape and health. They have a very high affinity for energy and thus want to use that energy for various activities like running, playing with their family members et cetera. Daily long walks with the Sammy tied to a leash are recommended.

It is very important to note that these Samoyeds do not respond well to rough training methods and thus may become stubborn and uninterested while getting trained. They can be trained firmly but also require the trainer/owner to be more loving and pleasant towards them. Reward-based training methods are very effective and make the whole process easier.

Sammies have a heavy double coat with a soft and woolly undercoat and a harsh but longer in length outer coat. They shed their coat quite a lot on a frequent basis. The shedding is more severe during the hot weather season and it requires regular and daily brushing of the coat to remove the extra loose hair. Apart from the shedding season, the frequency of brushing of the coat can be reduced from every day to 2-3 times a week. Other basic things like bathing and trimming of nails can be done as deemed necessary by the owner.

The Samoyed is generally a fairly healthy dog, but it does tend to get affected if it is kept in very hot conditions. Other problems which are common in Sammies are listed below:

Sammies can be taken to the veterinarian’s clinic for tick control and normal health check-ups on regular basis. But, they tend to remain fairly fit and healthy through most of their life-span.

It is believed that these smiling sled dogs were bred by a group of nomadic tribal people known as the Samoyeds. These people were living in very bad weather conditions and were struggling to find food for their survival. Hence, they wanted a companion who would help them in hunting and also haul their sledges.

And, after the Samoyed dogs came into existence, they just did what they were supposed to do. They helped the Samoyed people in finding food, pulled their loads and also herd the reindeer. The tribal people also appreciated the efforts of these dogs and they allowed them to be a part of their family activities when the work was done. And, gradually they developed a very strong bond with these dogs.

When this beautiful and versatile breed was discovered by the explorers, they started importing them and these Samoyed dogs were brought to England. Their appearance and nature attracted Queen Alexandra who became quite fond of this breed and started breeding them.

And, after some years, these dogs were introduced to other parts of the world including the United States. They slowly became very popular among the masses and to this day, they are adored and appreciated by almost everyone for their beauty and gracefulness as well as their personality.