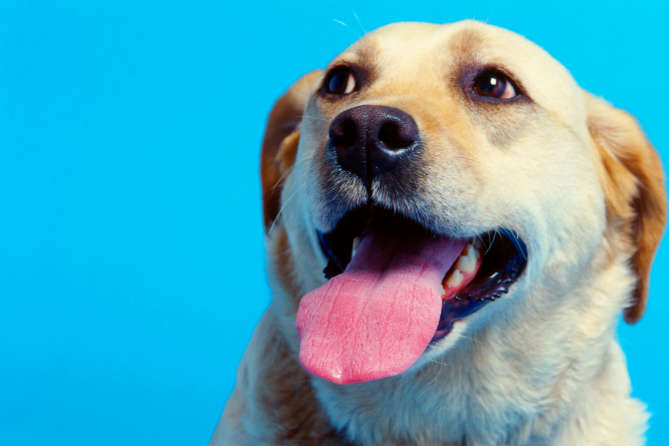 Labrador Retrievers are immensely popular all around the globe and that’s the case in India also. Demand for Labradors always remains very high in India. They are highly adaptable and friendly, but they also are not very tolerant towards heat and highly warm climate, hence, special attention and care must be given to them. India being a mostly hotter country should not be a very suitable place for Labs but still, because of their adaptability and care given by their owners, the number of Labradors is increasing at a very high rate in India. They also make a perfect choice for any novice dog owner as they are very easy to train and handle.

Official standards given by AKC describes Labradors as Medium to moderately Large dogs. They have a fine built with an athletic body that helps them in carrying out various physical activities with ease. Breed standards for Labrador are given below:

Lab’s size ranges from medium to large. Males are mostly bigger than the females and they outweigh them as well. A healthy male Lab should weigh between 28-36 Kgs and female ranges from 24-32 kgs. Also, a male Lab has an average height between 22.5-24.5 inches and female stands between 21.5-23.5 inches.

Labrador’s coat is mostly found in black, chocolate and yellow colors and is quite dense and shorter in length. They have a somewhat dry and oily coat which makes it water resistant and also helps in deflecting the cold in winter months.

Labrador’s have strong and well-balanced built with a muscular and powerful body. Their shape should be kept in check by proper exercising so that they remain fit and healthy.

They have a broad head with kind and reflective eyes and flesh free cheeks. The lining around the eyes is mostly black with eye colors mostly ranging from brown to hazel. The ears are set slightly above the eyes and hang close to the head.

Their jaws are strong and powerful with a medium length muzzle. They also should have regular and sturdy teeth and any deformity in this department should be treated with proper dentition.

Labrador’s are renowned for their pleasant, kind and always keen to please nature, they show friendliness towards both man and other animals. They make excellent pets and are also one of the least troublesome breeds out there. Labs always have a great energy level which keeps them enthusiastic and alert. They are a highly intelligent and focused breed and their abilities should be harnessed and put to good use so that they always remain mentally sound and balanced. Some basic traits of Labrador Retrievers are given below:

Labradors or Labs are widely regarded as quite friendly, outgoing and high-spirited dogs that love to spend most of its time beside his/her owner or non-biological parent (a less colder term). They are very agile and have high affinity towards energy but only if their health is maintained and they are kept in good shape. Labs are very kind and good-natured and are ready to form a friendly bond with almost anybody. They are quite enthusiastic and requires an equally eager handler that plays with them and spends time with them with the same compassion and love as they have for their handler. Labs are also known for their intelligence as they are fairly quick learners and can perform various activities like fetching, playing numerous games with the handler along with others. They are also used as assistance dogs for the handicapped because of their calm and warm nature and their ability to learn commands.

These different types of Labs have some differences based on color, built structure or energy levels. American Labrador is comparable to a Work bred Lab and same is the case for English Labradors and Show bred Labrador.

Labradors are also mainly found in three colors which are yellow, brown (chocolate) and black. Apart from these core colors, there are various variations and shades of these colors in which a Labrador can be found.

In India, the most common colors of Labrador that are found are Yellow and Black. But, Brown colored Labs are also becoming very common. And, all these colors are rather easily available.

A grown Lab should be given two full meals consisting of high-quality food daily. Feeding also depends on the dog’s size and activity level, hence that should be kept in mind while feeding. They should be provided with nutritious and healthy food to make their body stronger and more robust.

Labradors must be provided with a good amount of exercise and various physical tasks on a regular basis. They are very enthusiastic and energetic and loves to spend their energy on activities like fetching, running etc.

Labradors are always eager to learn different things from their trainers. They should start receiving training at an early age of about 2-4 months as that is a very productive phase for Labradors for learning required and necessary skills.

Labradors are rarely in need of a groomer. They do not require frequent baths and also their coat is mostly water-repellant. Their nails need to be trimmed whenever necessary.

Labradors shed a lot. And, the shedding season for Labs is all around the year. They should be brushed regularly with a soft and tender brush so as to avoid excessive shedding.

Generally, Labradors are reasonably healthy and strong but they are also prone to various health issues, if not provided, adequate exercise and physical training as required. But, like any other breed, Labs also suffer from various health problems and the most common are the Orthopedic ones like Hip Dysplasia and Osteochondritis Dissecans. Apart from these orthopedic problems, Labs also suffers from Progressive Retinal Atrophy (PRA), Epilepsy, Tricuspid Valve Dysplasia (TVD), Myopathy, Acute Moist Dermatitis etc.

Labrador’s weight and shape must be maintained and kept under control if the lab owner is not quite fond of frequent visits to the vet. They are highly prone to obesity and thus proper exercise and diet is a must. But, still, regular check-ups with the vet is advisable in case of Labrador Retrievers.

Labradors were known as St. John’s water dog, they were named after the capital city of Newfoundland, Canada where they first originated. Loyalty and dedication were always their core traits and hence they worked firmly beside their handlers who were mostly fishermen. Their main task was to retrieve fishes who had escaped the fisherman’s hook, Labs also helped them in other small day-to-day chores.

Labrador’s immense usefulness and good temperament were noticed by the Englishmen in the mid-1800s and they were shipped to England to serve as hunting retrievers. They serve the English hunters by retrieving the game for them. They were then, given the name Labrador to distinguish them from their Newfoundland counterparts.

After years of existence, Labs were finally recognized by the American Kennel Club in 1917 as a distinct breed and later imported to the United States of America in the mid-1930s. In 1991, they were registered as the most popular breed by the AKC and has remained at the top spot ever since. Today, they are loved and appreciated by a large number of people for their utmost adherence and obedience.