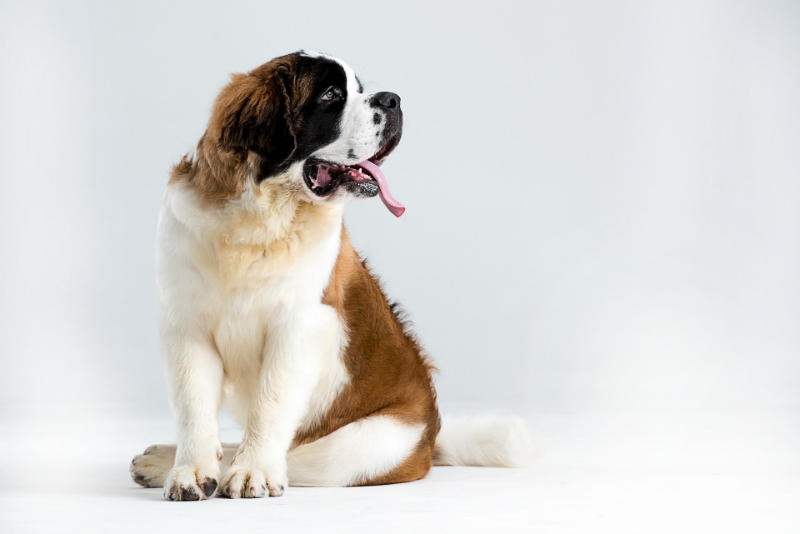 Is St. Bernard Good for Indians?

St. Bernard is not a very common breed of dog to be found in India. Although their numbers are rising slowly, they are still considered fairly rare in the country and are also not readily available here. And, there is a good reason for that. St. Bernards are not made to live in hotter areas. They have a poor to average heat tolerance and can’t thrive efficiently in a hot region. On the other hand, their tolerance towards low temperatures is awesome. They love to live in a snowy area with cooler conditions surrounding them. Hence, it is very important for the potential owners of this breed to keep them away from the excessive heat of the summer season. Spending extra time in the heat can lead to harmful effects on their health. If the potential owner is living in a cooler area like a hill station or he/she is willing to spend extra bucks on electricity bill to keep the big dog chilly, then St. Bernard might be a good idea, but anyone else should thoroughly think before owning this giant canine.

St. Bernard is a very powerful breed. They are exceptionally well built and possess a good muscle to fat ratio. This ratio must be maintained though because they are prone to obesity. They are considered to be a Giant breed of dogs and below are some official standards for this breed that supports that claim.

The average weight of St. Bernards lies anywhere between 55 to 85 kg. But, they can go a lot higher if not taken care properly. They are very tall as well and their height complements their enormous size. St. Bernards stood around 26-30 inches tall (at the shoulders).

They have a smooth and dense coat which is short to medium in length. Their thighs and upper part of the tail region appears to be bushy with longer strands of hair but it becomes shorter as we move towards the tail end. Their coat can be found in various shades of red colour or combinations of red with white. Yellow-Brown colours are also permissible.

St. Bernards are strong and mighty dogs that are built like a tank. They have a muscly neck that sits on very powerful shoulders. Their chest region is moderately deep and is fairly well arched. They have a perfectly straight and broad back with strong hind and forequarters to round things off.

Similar to their entire body, the head region is very large and imposing with a massive skull and high cheekbones. They have brown coloured medium-sized eyes with an affable expression in them. They also possess smaller folds of skin on their forehead area.

They have a well-developed jaw region with strong teeth placed firmly inside their mouth. The muzzle is shorter in length but does not taper.

St. Bernards are perfect examples of the phrase “don’t judge a book by its cover”. They appear to be very imposing and intimidating, but contrary to that, they are very friendly and loving in nature. They are not a breed with high intensity and energy and often loves to be quiet and peaceful. They also love to socialize and have an out-going and welcoming attitude which makes them a lot more fun to be around. Key characteristics of St. Bernards are:

St. Bernards might be huge in size but they have a heart of similar magnitude. They are very friendly and pleasant with everyone and loves to be around someone. They are of very trusting nature and are very fond of their owners and family members. They love to please their close ones and want their affection in equal amounts.

But this breed is not very adaptable. Their towering size makes them unable to comfortably adjust in a smaller space. They require a good amount of room for them. Also, as mentioned above, they are highly affected by harsh heat in countries like India because of their low resistance to high temperatures. And, don’t let their big stature fool you, they are a very sensitive breed of dogs. They require the presence of their loved ones almost all the times and are not very tolerant towards loneliness.

All these aspects make St. Bernard not a very good option for novice owners. But, they can be easily handled with love and care by an experienced owner who has a passion for dogs and is prepared for all the above-mentioned responsibilities of this mighty but charming companion.

There are different types of St. Bernard based on different colours of their coat. Popular colours are:

With large breeds, there is a risk of overfeeding and that may lead to undesired weight gain, eventually making them obese. Same is the case with St. Bernards. They are large dogs and require a sufficient amount of feeding material to maintain their health. But, they should be fed with precaution so as not to overindulge them. Best way to feed them is by giving smaller portion of meals multiple times a day rather than feeding them all at once.

Exercise needs of these dogs are easy to fulfil. They require a reasonable amount of exercise to spend their energy efficiently. They love to spend time with their owners, so a short stroll (on a regular basis) in a peaceful environment with a loved one can help in keeping them fit and making them happy.

Training a St. Bernard is very important as they can unknowingly develop bad habits like pulling of the leash, jumping on people (with affection, nonetheless) et cetera. They should be trained from an early age about obedience and listening to commands. They are very friendly and complaint and will respond positively towards the training program.

Similar to their exercise requirements, their grooming needs are also fairly moderate. Weekly brushing of hair to remove the unwanted loose hair and dirt from their coat is more than enough. The frequency of brushing should be increased during the shedding season. Shedding occurs twice a year for St. Bernards but they shed in large amount. Occasional baths are also necessary to keep them neat and tidy.

St. Bernards require frequent visits to the veterinarian for regular body check-ups. Owners should also consult about the feeding routine with the vet.

St. Bernard is one of the most virtuous breeds of dogs of all time. And, their history and their past help in cementing this fact. There was an infamous and very dangerous route known as Great St. Bernard Pass in the western Alps which was the amusement of many travellers. Thousands of people lost their lives while commuting through this pass.

Around 980 AD, Archdeacon Bernard de Menthon set up a hospice near the treacherous pass to help the injured travellers. For extra assistance, he started breeding the Tibetan Mastiff with various other breeds like Greater Swiss Mountain Dog, Great Dane and Great Pyrenees, and St. Bernard was founded.

The breed was first used for guarding purposes but then their hidden talents and abilities were discovered. They had an excellent sense of smell and were used as pathfinders. They were tremendously good at this job and sniffed out a lot of lost travellers. They were responsible for saving thousands of lives. Because of this, they had many names paying respect to them like English called them Sacred Dogs, Germans renamed them as Alpen Dogs.

It was later proposed that they should be named after the man who was responsible for their existence. And, so they were officially given the name St. Bernard in 1880. Today, their use as a rescue dog has been diminished but there are numerous St. Bernards still present in the hospice in the swiss alps.